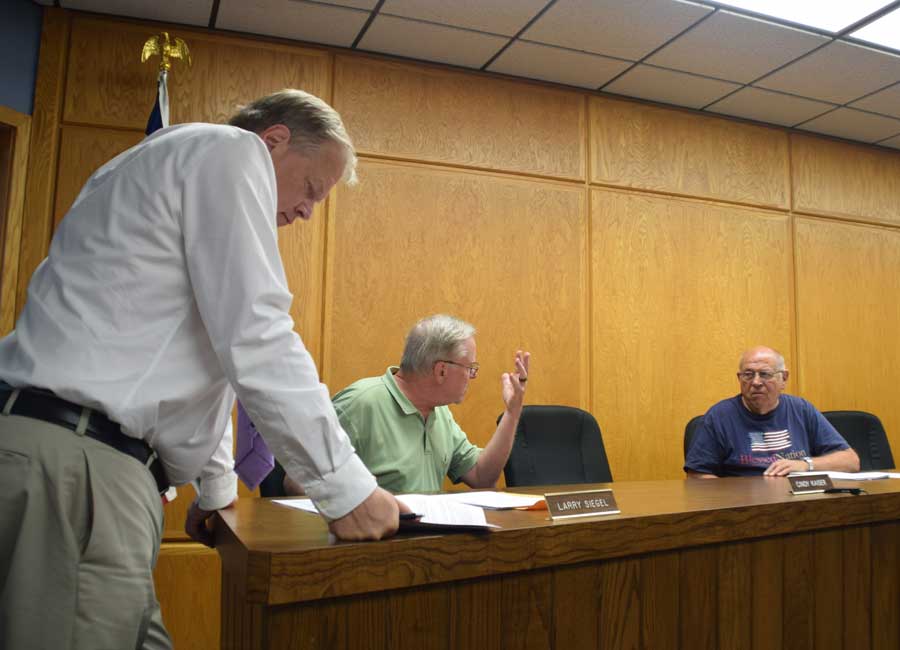 Due to redistricting, Abbott will represent Syracuse and North Webster after the November primary. Abbott told the council this week he had a tour of the town and was very impressed. He also did a tour with the Department of Natural Resources.

Abbott said he was excited to have Syracuse in his district, having spent time on Lake Wawasee as a youth. 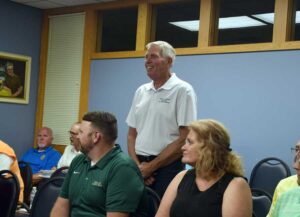 State Representative David Abbott introduced himself to the Syracuse Town Council during the council’s regular meeting Tuesday night. Abbott will represent the Syracuse and North Webster area after the general election in November.

He told the council he will be looking for more funding for the DNR, soil and water conservation and Lake and River Enrichment grants. “I’m kind of passionate about that,” he said.

Lantz introduced himself and gave an update on what the Animal Welfare League is doing. He said it is currently working hard to rebuild its reputation in the community, rebuilding the board by bringing younger people and has a brand new director.

A new project underway at the animal welfare league is shelter buddies, where children come in and read to the shelter pets.

Lantz also reported the shelter had only 30 animals euthanized last year. “We work for the whole county and sheltering is a community issue, it’s a county issue,” he said. He explained how the shelter is funded through fees paid for animals brought in by Kosciusko County Sheriff’s deputies, while the city of Warsaw provides funding. Funds also come through grants and donations. 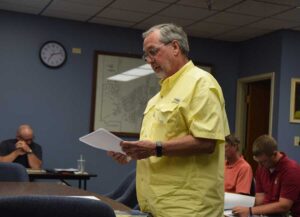 John Lantz, president of the Kosciusko County Animal Welfare League, provided an update to the Syracuse Town Council Tuesday night on what is new at the animal welfare league.

Jeremy Hardy of Commonwealth Engineering, the town’s engineering firm, updated the council on several projects. The council approved a $2,500 right of way fee for CSX for road improvement work to be done in the Main and Rail Road Street area. The Lakeside Water Main Loop is out to bid. Hardy explained the town will bid just on the work and purchase the materials when it can get the best price. This will help keep the bids reasonable.

Hardy reported he met with David Wilkinson, town manager, and Mark Aurich, public works superintendent, about having a public works 5-year comprehensive plan. The council approved spending $55,000 for pressure testing and fire flow research regarding the town’s future growth. The council decided to move forward with the comprehensive plan and will approve it next moth after looking at ways to finance it.

The council approved a zoning ordinance amendment for a cell tower on Wawasee School property. The tower will be for multiple carriers.

In the town reports, Chad Jonsson, park superintendent, reported about 250 people participated in the Mudtastic. The park department is preparing for the Fourth of July with Long Drive closing at approximately 4 p.m.

Aurich thanked the public for its patience and drinks while the public works department cleaned up storm damage last week. He requested $50,835 for sidewalk installation. The council approved the request; however, Councilman Larry Siegel asked Aurich to coordinate with event organizers so roads were not milled before upcoming road races. Aurich requested route maps for the events.

The Huntington Street lift station is next to be replaced at a cost of $83,200. Aurich explained the bid is high, but piping replacement needs to be done before the new pump is installed.

Council President Bill Musser praised Aurich and his crew for their hard work after the storm swept through the area last week.

Fire Chief Mickey Scott requested $11,500 to upgrade the security systems at both fire stations. The council approved the request. The department will host its annual barbecue chicken and pork chops 10 a.m. until sold out Saturday, July 2. Prices will remain the same as last year.

The fire department has received a number of complaints about local restaurants locking their doors during business hours. These restaurants are short-staffed, so they allow a certain number of customers they can serve then lock the door, keeping customers from entering or leaving the establishment. This is a violation of the state fire code and can result in steep fines from the State Fire Marshal.

“We understand businesses are short-staffed, but you cannot risk public safety,” Scott said.

In public comments, John Longenbaugh thanked Virginia Cazier for her assistance as well as Councilman Larry Martindale for his help on a matter. He also thanked Aurich, Scott and Police Chief Jim Layne for their service to the community.