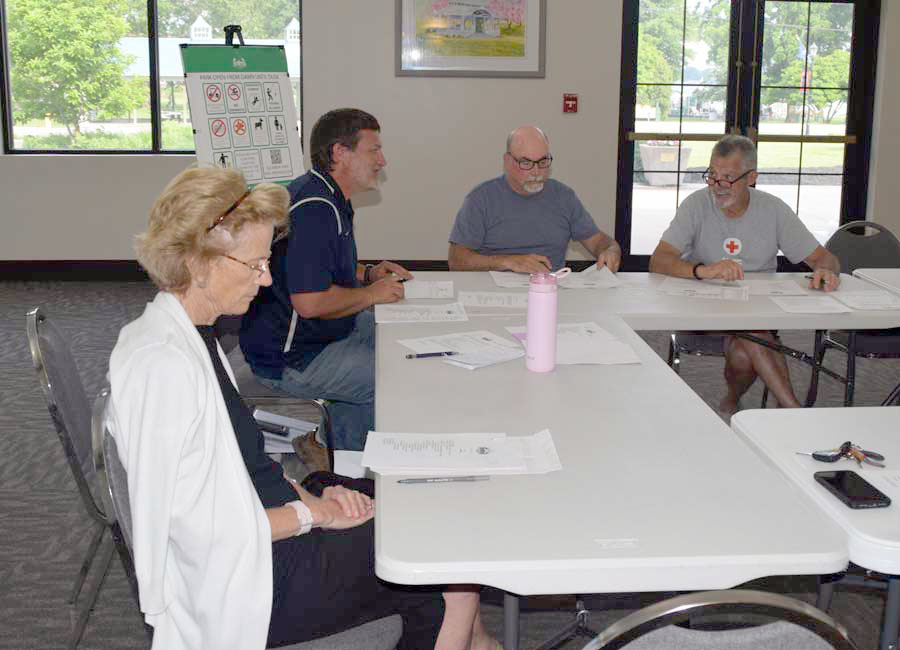 SYRACUSE — Members of the Syracuse Park Board got their first glimpse of the 2023 park budget during their regular meeting Monday night, June 13.

The board approved a request from Erlene Yentes to have a beer tent on the patio of the Syracuse Community Center for the Tour des Lakes, which will be held July 16.

Work continues on Schrock Field. Jonsson told the board the walking trail and basketball court are currently being installed. The top coat of blacktop should be installed this week.

Plumbing fixtures have been installed at the ball park. The light poles are up and the light fixtures are on them. The playground will be installed next month. “It’s finally looking like something’s happening,” Jonsson said.

The park staff will see a demonstration of the mower it is interested in for Schrock Field sometime the week of June 27. Part of the test will be on the hills surrounding the parking lot of the community center.

Regarding the two new pavilions, Jonsson told the board the architect is waiting for the state’s review of one part of her proposal. He hopes to have better architecture drawings for the board to review at its July meeting. David Johnston, board vice president, asked why the pavilions have to be approved by the state. Jonsson explained they are public buildings.

The board had an opportunity to see a sample of the proposed bilingual signs for Veterans Memorial Park. .

Board member Kip Schumm brought several complaints from members of the public regarding loose dogs in Lakeside Park, people fishing from the beach area and personal watercraft being beached near the beach area.

Jonsson said if staff see those things, they address it, but he also wondered if lake patrol could help out. Board member Mary Hursh asked if there needed to be a sign on a post in the water stating no watercraft.

Jonsson noted the buoys are already marked, but agreed PWC on the beach has become more of a problem in recent years.

Johnston asked if the $5,000 the Syracuse Town Council gave for lifeguards helped attracted any applicants. Jonsson said no.

Jonsson provided an update on the no leash park. Johnston, Schumm and Jonsson met with Bill Musser, president of the Syracuse Town Council. They are still moving the project forward.

Jonsson told the board the 2007 Gator finally “died.” He provided specifications for a new multi-purpose vehicle. He hopes to be able to present quotes to the board at the July meeting.

The tree board is working on a tree removal list for the fall. The park department has purchased some flexible netting to put around the trees planted this spring to keep deer and other animals away from them.

Darin Lursen, program director, reported the Artisans & Farmers Market is in its fourth week and is averaging 11 vendors. Produce is finally starting to come in, with one vendor offering asparagus, strawberries and string beans last week.

Yoga on Tuesdays will be done at the end of the month, when it will be reassessed. The instructor is averaging about eight students a class.

The 8th annual Mudtastic will be held Saturday, June 18, at Wawasee Area Conservancy Foundation. Right now about 207 participants have registered.