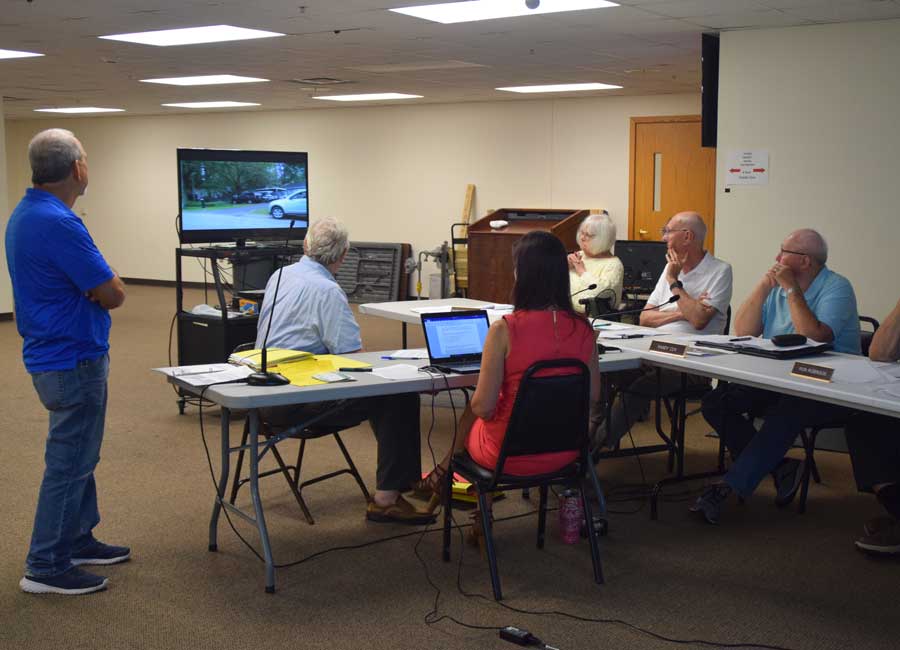 WARSAW — Courtney Fields’ request for an exception for the purpose of allowing a commercial recreation and wedding venue in an agricultural district was unanimously denied by the Kosciusko County Board of Zoning Appeals regular meeting Tuesday, June 14.

Fields’ property is located east of SR 13, west of Old SR 13 in Washington Township, just north of Pierceton. She told the board she wanted to use the property to host weddings with up to 300 guests as well as other events.

After explaining her plans for hours of operation, parking and drainage, Dan Richard, plan commission director, presented the board with 11 letters of remonstrance. Local attorney Steve Snyder, representing numerous remonstrators, several of whom attended the hearing, gave a detailed explanation as to why the board should deny the exception.

He argued the venue would create traffic issues in an area where there have been numerous collisions and listed other concerns – limited parking, light pollution, noise pollution and drainage issues – the property has a wetland near its north property line.

The property also has a county ditch running through it which is near capacity. Snyder also pointed out the property would need a commercial septic system that is overseen by the state health department. One of Snyder’s exhibits was from a neighbor who is a veterinary nurse. The exhibit states that having so many people coming in and out could cause stress to nearby farm animals while a local realtor wrote saying it would negatively affect neighboring property values.

Fields tried to defend her plan, saying she wanted the venue to look like a farm house and that it would host “upscale weddings.” She told the board the site plan was just to give the board an idea of what she planned for the business.

Lee Harman, president of the BZA board, noting there was a significant amount of opposition from the neighbors, moved to deny the exception. His motion was carried by the rest of the board.

Tammy Cotton, program coordinator for Living in Transition Effectively, came before the board seeking an exception to allow the change and alteration of a non-confirming use by allowing a parsonage to be used as a transition home for up to six women and one live-in program/house director at a property on Catherine Street in Milford.

Cotton explained the program has the backing of the United Methodist District and Conference. LITE helps women transition from the county jail back into the community by offering a host of services. The program makes use of the former Milford United Methodist Church next door.

The Milford Town Council sent a letter of support to the board. Pastor Mike Beezley, who has been appointed by the United Methodist Conference to oversee LITE’s program, told the board, “We’re doing this under the eyes of the conference… I assure you it has great oversight.”

Dan Brown, a neighbor who lives down the street from both the church and parsonage, said “this is a unique opportunity for the church. I’m pleased to see something on that corner that has great support.”

Becky Alles, Van Buren Township trustee, told the board it was devastating to close the church, but “God does move in wonderful ways… This is a much needed program in our community.” The board voted unanimously to approve the petition.

In a continuance from last month, the board heard a petition for a variance from the Indiana North District Wesleyan Church in Silver Lake which sought to reduce the required parking spaces from 125 to 61 for a commercial property.

A civil engineer for Dollar General, the commercial enterprise going into the property, explained the company has requested reducing the number of parking spaces in the past. He also discussed the landscape plan.

Richards told the engineer 10 trees did not provide much of a buffer. He requested more greenery be added to the landscape plan. Harman asked about drainage issues. Richards was told there would be no drainage from the parking lot onto surrounding properties.

Hugh Murfin, Silver Lake Town Council president, told the BZA the council was in favor of Dollar General reducing the number of parking spaces, saying a competitor only has 12 spaces and seems to do just fine.

Carolyn Montel told the BZA she had no problem with reducing the amount of parking. Her issue was the entrance to the parking lot being directly across from her living room window. “Dixie Drive is a residential street. The entrance/exit should be on SR 15,” she said.

The board approved the petition as presented.

The board also approved the following petitions:

After dealing with numerous petitions involving sheds that were placed without permits, BZA member Randy Cox said, “We have all these popup businesses selling sheds. They need to tell people they need a permit!”

The board also approved two carry over cases from the Hearing Officer meeting held Monday, June 13.