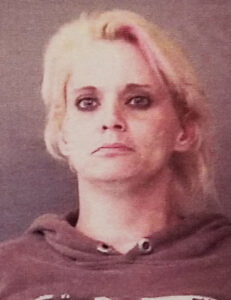 WARSAW — An Auburn woman received a four-year sentence for illegally possessing a firearm as a convicted felon.

Amanda Lee Long, 40, Auburn, was charged with unlawful possession of a firearm by a serious violent felon, a level 4 felony; and possession of methamphetamine and failure to appear, both level 6 felonies. Two additional criminal charges, as well as a separate methamphetamine possession case, were all dismissed as part of a plea agreement.

Long was sentenced in Kosciusko Circuit Court on Thursday, June 9.

On Oct. 18, 2020, an Indiana State Trooper was in the area of Zimmer Road when he noticed a driver fail to properly signal their intention to turn. The trooper pulled the vehicle over and identified its driver as Long.

According to court documents, Long was talking very fast and fidgeting in her seat. A K9 unit at the scene made a positive alert on the vehicle. While searching the vehicle, officers found a white crystal substance on the vehicle’s floor, as well as a handgun and ammunition. Officers also found a bag containing 4.2 grams of methamphetamine.

Long told officers she last used methamphetamine on Oct. 17, 2020. She denied knowing about drugs or a gun in the vehicle. A passenger in the vehicle, John M. Dimmitt, Warsaw, told officers that Long kicked something under her seat when they were being stopped. Dimmitt said he had heard Long talk about the gun.

The failure to appear charge stems from Long not appearing for her initial hearing in this case.

Long is classified as a serious violent felon for a prior conviction of dealing in a schedule II controlled substance, a Class B felony.

Dimmitt’s case is still pending. He has a pretrial conference on June 27.

During court proceedings, Chief Deputy Prosecuting Attorney Brad Voelz called the case “sad,” describing Long as always seeming pleasant and intelligent while in court. Voelz noted that even though the Level 4 felony required prison time, he requested the court consider alternative sentencing in the future.

“I hope someday she can become an outstanding citizen in our society,” said Voelz.

Defense Attorney John Barrett said Long was not accepted into the county’s community corrections program and that he did not receive an answer from work release. He also said Serenity House, a local recovery house for addiction treatment, was willing to accept Long into their program.

Long apologized for her actions and said she’s worked hard on bettering herself over the last year.

For unlawful possession of a firearm by a serious violent felon, Judge Reed sentenced Long to three years in the Indiana Department of Correction. Long also received six-month DoC sentences for methamphetamine possession and failure to appear. All three counts will be served consecutively to one another, as well as consecutively to two cases out of DeKalb County.