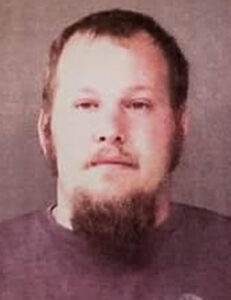 PIERCETON — A Pierceton man was arrested after allegedly grabbing a child by the neck.

Michael C. Roberts, 35, 8280 E. US 30 Lot 57, Pierceton, is charged with domestic battery to a person less than 14 years of age by a person at least 18 years of age, a level 6 felony; resisting law enforcement, a class A misdemeanor; and criminal mischief, a class B misdemeanor.

On May 8, a Kosciusko County Sheriff’s Office deputy responded to a potential child abuse situation in Pierceton. The deputy spoke with a woman who said Roberts had grabbed a child by the neck. The woman said the child had a visible red mark on the back of their neck and showed the deputy pictures of the child’s injury.

According to court documents, while the deputy was speaking with the child about the incident, Roberts approached the residence where the battery occurred. The deputy asked Roberts to wait by his vehicle. Roberts walked away, contacted county dispatch, and requested another officer respond because the deputy was “being aggressive.”

The child said they were arguing with a second child when Roberts grabbed them by the neck. The deputy noticed the child’s neck was still red while he was speaking with them.

Roberts told the deputy that the second child in the home put the battered child in a headlock, which caused the red mark. When the deputy told Roberts he was being arrested for domestic battery, Roberts allegedly tried to pull his arm away from the deputy.

The deputy took Roberts to the ground, and Roberts refused to lay on his stomach and give the deputy his hands. At one point, the deputy’s body camera fell onto the ground and Roberts threw it about 20 feet. The deputy was able to get Roberts into handcuffs and placed him in his patrol vehicle.

The deputy was given his body camera back by an onlooker and noticed it was scratched. Footage from the incident was lost since the camera shut down after being thrown. Repair/replacement costs for the body camera are $625.

Roberts has already been arrested and released on bond. He has an initial hearing at 1 p.m. Friday, June 10, in Kosciusko Superior Court Two.