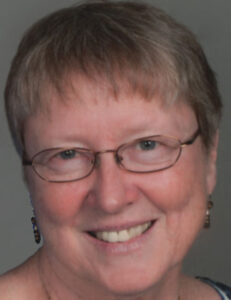 She was born April 4, 1949, in Anápolis, Goiás, Brazil, on her beloved father’s birthday. She was the daughter of Theodore Reichardt and M. Elizabeth (Folsom) Taylor. She grew up in Brazil with fond memories of going to the market with her dad on horseback and playing with her siblings.

Her courage and zest for life introduced her to many adventures. She set up a photo lab in her apartment bathroom where she developed portraits of her family and friends. She taught high school English in Newark, New Jersey. She learned how to play the guitar. She took her family on a multi-country trip from Phoenix, Arizona, to Brazil, traversing all of Latin America by bus. She drove a motorcycle. She enjoyed woodworking, restoring furniture and maintained a uniquely beautiful home for her family. She served on the board of a local credit union. She led mission trips to Zimbabwe, Brazil, and Costa Rica.

From 1981 to 1989, she served as a missionary for the United Methodist Church in Recife, northeast Brazil, along with her family. Her open-minded respect for life was welcomed as she ministered to many, acting as director of an elementary school and teaching Sunday School.

She was ordained as a minister in the United Methodist Church in 1996.

In June 1997, she met the love of her life, Kevin Haney, whom she married in June 2001. Before marrying Kevin, she served as minister at Beaver Dam UMC and Marquette Park UMC, Gary and completed two more years as missionary in Recife, Brazil.

After marrying dairy farmer Kevin, she was the jurisdictional mission interpreter for the North Central Jurisdiction of the UMC for two years and then was called to serve the Claypool UMC until she retired. In retirement, she loved to spend time in her flower garden, be with her grandchildren and travel to visit family and loved ones in Brazil. Every summer, she and Kevin would take the grandkids to travel around Indiana, Kentucky and Illinois. They loved taking the grandchildren to Holiday World amusement park. On her final trip, they took eight grandkids.

Her generosity of spirit and laughter will be missed.

The interment will take place following the service in the Akron Cemetery, Akron.

The arrangements have been entrusted to Hartzler Funeral Home 305 West Rochester St., Akron.

For a memorial, Evelyn’s dear friend Jane Blackburn runs a fund in northeast Brazil that helps local young adults pay for schooling to be ministers, nurses and other healthcare professionals. Contributions may be made out to Jane M. Blackburn.

Share a memory or send an online condolence at: www.hartzlerfuneralservices.com