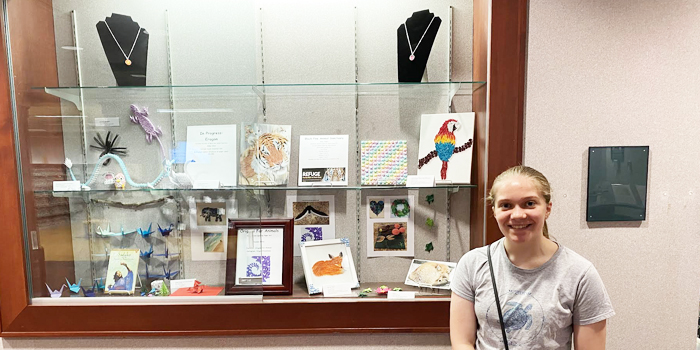 The artwork of Kendel Josey, a 14-year-old from Leesburg, has been on display at the Warsaw Community Public Library for a few weeks. Josey does origami as well as quilling art, which involves gluing together pieces of paper to make a design. InkFreeNews photos by Leah Sander.

And doing origami and quilling art.

She’s married the two for a display that’s been up at the Warsaw Community Public Library for a few weeks.

Some of her artwork features animals from Black Pine Animal Sanctuary in Albion, an organization the 14-year-old homeschooled student from Leesburg is passionate about.

“I originally started because I have a really tough time sitting still in general just from ADHD and stuff,” she said. “I just found if I had something to do with my hands while I talk that it really helped for me to be able to focus more.”

Over the years, she estimates she’s done thousands of origami pieces including a little less than 100 larger ones. She noted she often gives her artwork away.

“If her origami had tracking devices, it would light up all over the country, everywhere we go,” said her mother Julie Josey.

Kendel said she sold some of her art at the Kids Business Fair in North Webster when she was still young enough to participate in it. Proceeds from her art sales went to Black Pine.

The sanctuary cares for exotic animals who have been “abandoned, confiscated by law enforcement or relinquished by private owners,” said Kendel.

“A lot of them have trauma histories,” said Julie of the animals.

Kendel has had an interest in the sanctuary since she visited it after moving to the area with her family seven or eight years ago. Julie has volunteered at the sanctuary for a year and a half, and Kendel has started volunteering as well, helping give tours and preparing food for the animals.

Julie noted Kendel’s been passionate about animals since “before (she) could walk.”

Kendel said she’s planning in the future to use her artwork to raise more funds for Black Pine’s animals. She not only has a passion for giving financially to Black Pine; its animals also inspire her work.

She’s done one piece that features Black Pine’s scarlet macaw Major, and is working on another featuring the sanctuary’s late tiger, Eragon.

Kendel also suffers from Asperger syndrome or high-functioning autism, which causes her to hyper-focus on tasks.

“It isn’t always a bad thing, as long as you figure out … something that can be used to your advantage,” said Kendel.

“It has a great deal of tie-in to the connection that she has with the animals because a lot of those animals have really struggled and had a hard time,” said Julie. “Kendel can sympathize with them more.”

Kendel said her career aspirations may involve working with animals.

As for her art, she sees it mainly as a hobby, adding that turning it into actual work might take away her passion.

“She has plenty of people that want to sponsor her as a business. She could really start a business, but then it might be pressure,” said Julie.

“Her primary motivation for any type of acknowledgment is to draw attention to the animals (at Black Pine) and the kinship that she has with the animals because they’re often misunderstood,” said Julie. “It is not about her; it is about her finding her way and coming up with ways to cope with things that are hard and a struggle, and she took the struggle and ran with it.” 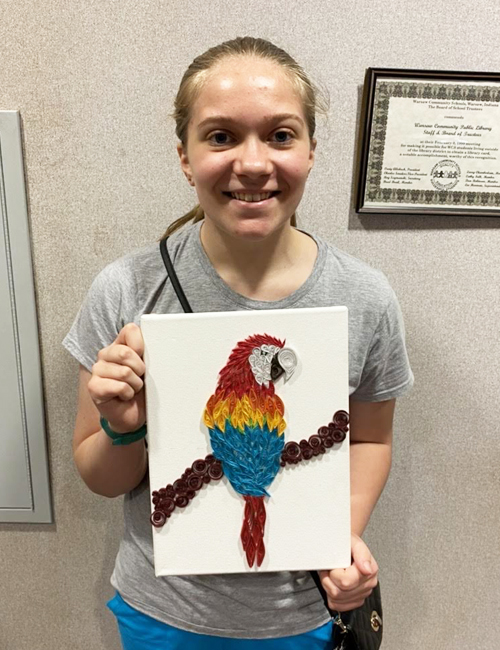 Josey is passionate about the animals at Black Pine Animal Sanctuary in Albion, where she and her mother Julie Josey volunteer. She seeks to bring recognition to them through her work, and her some of her artwork has been inspired by them. Shown, Kendel Josey holds up a quilling piece she made featuring Major, a scarlet macaw at Black Pine. 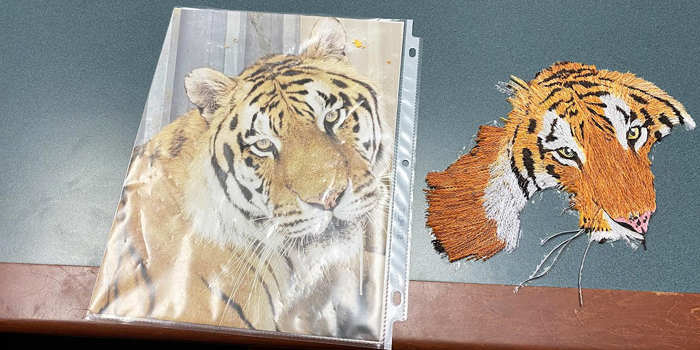 Kendel Josey is currently working on a quilling piece featuring Eragon, a late tiger that had been at Black Pine. Shown, a photo of Eragon, left, is next to the unfinished piece.