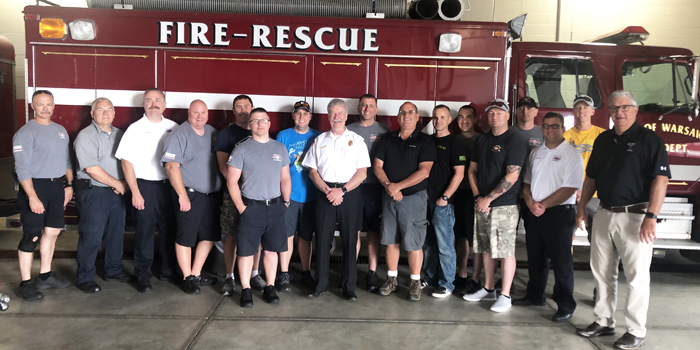 WARSAW – Ask any Warsaw-Wayne Fire Territory firefighter – or anyone who knows retired Fire Chief Mike Wilson for that matter – what they learned from him and the same word keeps coming up: compassion.

“The biggest thing that I’ve learned from Mike – and I think if you talk to anybody that knows Mike – it would be compassion. He’s got probably one of the biggest hearts I’ve ever seen on anybody. He walks in and just starts empathizing with people and tries to figure out how he can help them, and I think we all can learn more from that,” said Chris Fancil, WWFT EMS chief, during Wilson’s retirement party Friday at Station No. 3.

The four-hour retirement party brought out firefighters from different fire departments, state and local police, city and county officials, as well as friends and family. Wilson served 38 years with the WWFT, including the last seven as fire chief. Garrett Holderman, of Arizona, was named his replacement and took over early this year.

Holderman said, “Mike has a tremendous heart. He’s a wonderful human being and he’s helped guide me in the right direction. I do wish him well. I’m sure we’ll see him around.”

Having known Wilson for about 45 years, Fancil said, “I remember before he got on full-time, my dad was a full-time firefighter here so I remember him as a volunteer when I was a little kid.”

Fancil started part-time with the fire department in summer 2019 and then took his current position full-time in December.

He said Wilson has volunteered to stay on board with the Community Assistance Resources & Emergency Services (CARES) program and be a volunteer helper with that. The program helps address those dealing with a mental health crisis, those having trouble getting appropriate medical care or medications, emergency housing needs assistance and more.

“It’s really hard to walk away when your whole focus with that program is to help people. He’s taken on a new responsibility, new job that he’s leaving us for, but with the CARES program he can still go out and just sit and visit with people and help them get to those resources and help, and he’s going to do that as a volunteer,” Fancil said. “I’m pretty excited about keeping him around for that. He’s a good addition to the program.”

Mayor Joe Thallemer said, “Mike has done a great job, number one as an administrator. He built this station we’re standing in right now. He always made sure that there was proper equipment and training for our firefighters. The complexities of being a firefighter in our community with confined space training and diving – all the different disciplines that our firefighters need – Mike always made sure that they were trained and had the proper equipment. And that’s a really tough job, trying to balance, with limited budgets, the proper amount of training and equipment.”

He said the other thing that Wilson did really well was that Wilson put a very positive public face on the city’s fire department.

“I think it’s important when firemen are coming to the scene when folks are in need of assistance, that they’ve got that confidence that our guys are trained, they’re going to do the right thing and they are there to help us,” Thallemer said. “And I think the persona of our fire department is always like that because of Mike and his public abilities and the ability to go out and really give our fire department a really good public face.”

He said the CARES program is a primary example of Wilson’s abilities and persona.

“When I first asked Mike to go down to Fishers to talk to Mayor (Scott) Fadness and their fire chief about their program, I knew it was something important for the community and, again, I knew that Mike had that persona, a selfless persona, of when folks need help, no matter what kind of help it is, we want to be there. The program has taken off,” Thallemer said.

Wilson, he said, has spent a lot of time developing relationships for the program.

“We just hired a director. Our program has been in place and operational for the last year thanks to Mike and EMS Chief Fancil. So, again, that CARES program just typifies Mike’s approach to our community: Help at all cost. He’s selfless. He’s there when he’s needed,” Thallemer stated.

Several members of Wilson’s family were on hand for the retirement party.

Wilson’s sister, Deb Carpenter, said for as long as she could remember, Wilson was interested in being a firefighter.

“He was a volunteer first. He is 19 years older than me … I always have to give him a hard time about that, but he was a volunteer and worked his way up,” she said, adding that he “definitely” deserved his retirement.

Wilson said he went into the Army in 1975 as a military policeman. He spent his last three years at Fort Harrison, and was a part of the volunteer fire department at Ft. Harrison.

“That’s where my start actually started, at Ft. Harrison in Indianapolis,” he said.

One of Wilson’s daughters, Julia Wieland, recalled, “I used to beat him to the car when he was a volunteer and the sirens would go off, or the tones. I knew them all. And so I would beat him to the car because, from the moment I’ve been little, I have gone with him to fires, or, if I’m in town and I see a fire, I always stop so I can see him.”

She said she grew up in the firehouse.

“I went there after school. I took my naps in the beds that drop out of the wall,” she said. “It’s just been a really amazing experience to watch all of the guys and the brotherhood that’s between all of them.”

Wieland said her dad is still on the go and she doesn’t see him ever being able to truly walk away.

“I am sure that once he is gone for just a little while, he’ll want to be a part of committees and other things that would keep him involved still in the fire department because it’s his passion and I don’t see how he could really ever walk away from that,” she stated.

Reflecting back on his career, Wilson said, “It’s been an exceptional time, from being a volunteer, learning what’s going on in the fire service, to getting the full-time job in 1990, to being involved with this team is the best that it can ever be.”

When he’s asked by others what has he done to move forward, Wilson said he responds, “I allowed the guys, the boots on the ground, to do what they needed to do to take care of their community. I wouldn’t have been as successful as I was if it wasn’t for all of the guys that were underneath me.”

He’s loved every moment of it and plans to stay in community service.

“Taking care of our community is what I’ve been raised to do and that’s where I’m going to be,” Wilson said.

He added that he’s one of the stakeholders on the CARES committee and he’s going to be involved with that with Fancil.

“We have hired a new person that’s going to come out here shortly to take the role that I did, but I’m going to be involved with that. I’ll be helping them nights and weekends as they need,” Wilson said.

Additionally, he said he’s had the “fortunate opportunity” to be one of the new owners of McHatton-Sadler Funeral Chapel.

“I am the local managing partner. My other partners are in Cincinnati, Ohio, and southern Indiana,” Wilson said. “I started with Wendell Sadler when I was in high school in 1973. Been involved with the Sadler family ever since then, and just like John’s like a little brother to me, and we wanted it to stay kind of in the family, family transition, and our family is going to be involved in that.”

County Coroner Tony Ciriello said he and Wilson have been friends for at least 35 years. When Ciriello first met him, he said Wilson was a car salesman at Lakeside Chevrolet and he bought a car off him in the late 1980s.

“We served together in the coroner’s office since he joined that office in ’94,” Ciriello said. “I’ve known him a long time and I’m excited for his retirement and his new ventures in life and I just wish him all the best.”

“He was involved with the Squad 70 back then, which was the fire investigation team. That’s probably where I had the first contact with him since he had an accelerant dog at that time,” Rock said.

So what’s the best part about being a firefighter?

“Probably the fact that every time we run out the door, we’re going to help somebody fix their bad day. So we’re doing something to help the community,” Wilson said. “We’ve had some traumatic issues in our community. I can remember the day the tornado hit Da-Lite Screens. But being there to help those in their time of need is what it’s all about.”