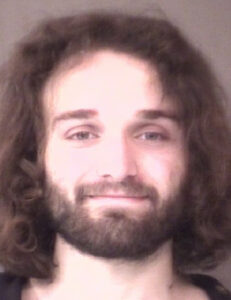 WINONA LAKE — A Winona Lake man was recently arrested after allegedly battering a woman and pointing a gun at her.

On May 24, a Winona Lake Police officer responded to a fight in progress. Upon arrival at the scene, the officer witnessed a man and woman punching each other. The man, later identified as Arnold, saw the officer and attempted to leave the area.

The officer spoke with the woman who was in a physical altercation with Arnold. She said she and Arnold were arguing when Arnold hit her on the left side of her face. The officer noticed redness and swelling on the woman’s left cheek. She also said Arnold grabbed a firearm as she was trying to leave and pointed it at her.

A witness said they saw Arnold chase the woman and noticed Arnold had a gun in his hand.

Arnold said he was in a verbal argument with the woman and that he hugged her rather aggressively. He told officers that when he asked her to stop yelling, the woman started screaming and punching him. Arnold admitted to dragging the woman to the ground, punching her, and grabbing a firearm. He also admitted to pointing the gun at the woman.

Arnold was booked in the Kosciusko County Jail on May 24, with a $26,000 surety and cash bond.

As part of his bond conditions, Arnold must surrender all firearms and is prohibited from possessing any firearms. He also cannot leave Kosciusko County without prior written permission.