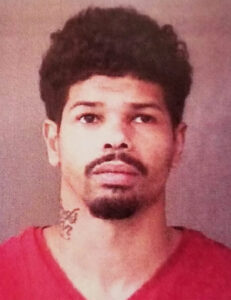 WARSAW — An Indianapolis man was recently arrested after allegedly threatening a woman with a firearm.

Derrick Curtis Perry II, 30, Indianapolis, is charged with intimidation with a deadly weapon, a level 5 felony; pointing a firearm and theft, both level 6 felonies; and invasion of privacy, a class A misdemeanor.

On Nov. 15, 2021, a Warsaw Police officer responded to a firearm theft at the Comfort Inn and Suites. Upon arrival at the scene, the officer spoke with a woman who said her friend, identified as Perry, was visiting her from Indianapolis. The two went to Rex’s Rendezvous together.

According to court documents, while they were at Rex’s Rendezvous, the woman said Perry became upset that some men wanted her to play pool. When they returned to the Comfort Inn, Perry became angry, grabbed the woman’s gun from a nightstand drawer and chambered a round.

The woman told the officer that Perry pointed the gun at her and told her not to move or he would shoot her. He later left the hotel room with the gun and left the area in a vehicle.

The woman showed the officer the gun box, which identified the gun as a Generation 5 Glock 22. She also told the officer that Perry was facing a felony charge for stealing another gun of hers in Marion County. A no-contact order was issued by Marion Superior Court 19 in July 2021 for a case in which Perry was charged with invasion of privacy. The order prohibits Perry from having contact with the woman.