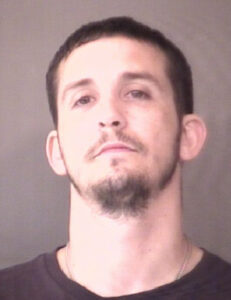 WARSAW — A Warsaw man was recently arrested after allegedly firing a gun at a man.

On May 11, Warsaw Police officers responded to the area of South Harding Street regarding a report of gunshots. Officers were unable to find a spent shell casing from a firearm at that time.

According to court documents, officers obtained security video footage of the sound of a gunshot at 3:23 a.m. May 11. A second camera shows footage of a man walking north on South Harding Street about nine seconds after the gunshot is heard. In the footage, the man is heard yelling profanities and appears to rack a handgun slide.

On May 12, a Warsaw Police detective interviewed a man about the incident. The man said he was having a conversation with Hollett on May 11 when the discussion turned into an argument. When the man followed Hollett out of a home, Hollett allegedly displayed a handgun, pointed it at the man and fired off one round.

The man showed officers where Hollett was standing when the shot was fired. Officers discovered one spent 9mm casing at the scene.

Hollett was previously convicted of residential entry in October 2018.

For this case, Hollett was booked in the Kosciusko County Jail on May 21, with a $10,250 surety and cash bond.