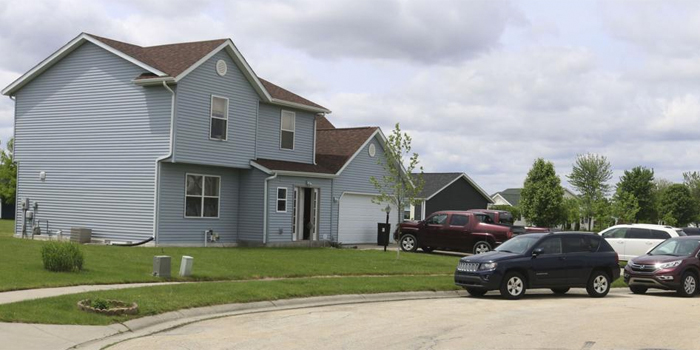 Rosemare Court on Goshen’s south side, after a fatal shooting which took place in this residence. Staff photo by Steve Wilson

By Sheila Selman
And Steve Wilson
The Goshen News

GOSHEN – Four loud booms, a girl screaming out a window – neighbors described the moments before police converged on their Rosemarie Court neighborhood Saturday to find victims of what police termed a targeted shooting.

Two males were killed and three females were severely injured, according to a statement from Goshen police. No ages or names have yet been released.

Sean Pounds is the stepfather of some of the victims and lives at the Rosemare Court home, which is on the city’s south side.

On Sunday, he visited with neighbors Gerald and Julia Blyly. While standing in their driveway, Pounds said of Saturday’s tragedy, “There’s words, but I can’t describe them.”

Julia Blyly was home at the time of the shooting, two doors down from it.

“I heard four really loud booms,” she said, adding that at first she assumed it to be someone nearby doing car repair work, until police arrived. She said the scene was still taped up by police at 11:30 p.m.

In the past, Blyly said, she had brought Christmas candy to the kids who lived at the residence.

“They always seemed so friendly,” she said. “(It was an) awful, awful thing (for the family) to go through.”

Another neighbor, Nicteloy Diaz, arrived at her home, across the street from where the shooting took place, at around 3 p.m., at which time everything seemed normal.

“I never thought of anything,” she said.

Later, closer to when the shooting reportedly took place, Diaz said she saw a girl in the window of the house seeming to cry for help, and crying out that someone in the house had been shot in the back and in the leg.

“Within five minutes there were cops all over the place,” she said. “After that, the police told us to go inside.”

An injured male was taken to Goshen Hospital for treatment and was declared dead, and another male died at the scene.

“Based off of information that officers have obtained, it is not believed there is any danger to the public related to this incident,” the Saturday statement from GPD reads. “This is an ongoing investigation, so there are no further details at this time.”

Police also added that the preliminary information indicates that the shooting was targeted and not gang related. Goshen has recently been dealing with an uptick in gang violence.