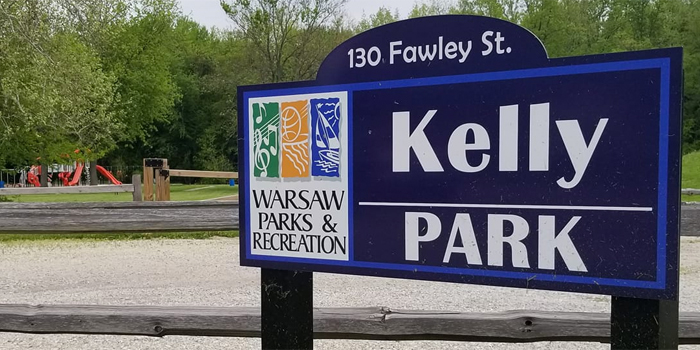 WARSAW – Work on the Kelly Park pond revitalization is tentatively set to begin in June and conclude by October, while the bids opening for the Central Lake Pavilion improvements could be done as early as June 17.

At the April 19 Parks Board meeting, Warsaw Mayor Joe Thallemer told the board that a donor has pledged $2.5 million toward the pavilion remodel. The name of the donor is not expected to be released until the board approves a memorandum of understanding. The current estimated cost of the proposed work is $3.1 million.

On Tuesday, Parks Superintendent Larry Plummer said, “We’re working to get approval and move forward with the bids at Center Lake Pavilion. We’re actually going to take our request to the Board of Works on Friday, requesting that we can go ahead and bid the project. We want to get ahead of the game. The MOU is not quite complete yet. That MOU will come to the Park Board before anything is done, but we want to go ahead and get the bids processed going. We hope by June 17 to have the bid opening. That date may fluctuate a week or two either way, depending on how the architect and city engineer get together, but that’s what they’re shooting for.”

“We just want to expedite this process as much as possible so we can see what the bids do come in at, see what the availability of contractors are,” Plummer said.

On the Kelly Park pond revitalization project, Plummer told the Board, “We’ve talked about this for quite some time.”

Earlier this week, Plummer said they had a pre-construction meeting and the work is scheduled to begin in the first or second week of June with the pond area.

“That will last through September, and then final completion in October is what they’re shooting for,” he said. “We met out there yesterday and they’re looking to bring the spoils around the sledding hill, take them out that way as opposed to Fawley Street because they didn’t think the street had enough base for all the trucks and the sledge. So they’re going to take it out on Baker Street around the hill there.”

Plummer said that will allow them to keep Kelly Park open more than if it was taken out on Fawley Street because the whole parking lot would have to be closed.

“Our intent is to keep the courts and playgrounds open as much as possible. There will be one part of the project where the stormwater lines come right by the tennis courts, pickleball courts on the east side, so when that happens we’ll have to shut down (the park) for a week or two, but that’s the least we can do to make this project happen,” Plummer said.

The project is funded by stormwater fees, and he said he was “really excited” about the project.

G & G Hauling & Excavating has the contract for the project, which includes inlet protection, excavation dredging of pond and channel, pipe work, adding shrubbery and a concrete sidewalk and more around the pond. The cost of the project is near $600,000.

“They kind of want to get the pond area done or stabilized before they run all the water that way,” Plummer said.

Jill Beehler, Parks Board member, said the pond project has had good publicity about it “in a couple different ways with good articles.”

Plummer said the current deepest part of the project is about 3 feet and they want to make the center at least 15 feet deep so it will sustain fish.

“That’s our whole intent is to try to stock the pond and bring it back to the way it was in the ’80s and people can fish out there, catch and release, and have some fun,” he said.

• Touch-A-Truck was Saturday and by the time it was over about 900 people went through.

• The Summer Concert Series starts May 27 at 7 p.m. with The Ted Yoder Band in Central Park. The band plays acoustic rock.

• The Fishing Derby starts at 8 a.m. June 4 at the municipal park. It is free for kids.

Maintenance Director Shaun Gardner reported, “We moved all the skate park ramps out of the way to the south end of the park out there. Street Department came in today and asphalted I’d say about two-thirds of the whole area inside there. We’re going to let that set for a few days. We’re going to attempt to move the ramps back to where they belong and reset them.”

He said they made some repairs when they moved them as some of them were in a “pretty rough” shape.

“We spent some time repairing them … and as soon as we get that set, the Street Department is going to come in and finish up the rest of it. We should have brand new asphalt out there when it’s all said and done,” Gardner said.

Plummer later said they didn’t realize how bad of a condition the ramps were in and it will take approximately a week to put everything back together over at Mantis Skate Park. That will delay the opening of the skate park for the season by about a week or so.

Moving on to the Indiana Street parking lots at Central Park, he said they tore out all the bushes. They were starting to die and were really bad looking, he said. Some boxwood bushes and stone were put in. Gardner said it’s a “cleaner” look and will last a little longer, too.

All the fountains and irrigation systems in the parks are up and running, as are all the restrooms, for the summer.

“We installed ornamental lights at the bench on Beyer Farm Trail. They’re behind where our pole barn is. It’s going to be a little bit of an improvement coming up here,” Gardner said.

Plummer said Mike Bradford, who was a subcontractor on a few park projects, and his wife own a company called Bradford Creations. “They would like to redo that area with new block wall and put new plantings and everything in there and kind of revitalize that bench area that’s out there right now,” he said.

The Bradfords want to donate their labor and materials to do that, Plummer said.

“We had a spare ornamental light and I suggested we put that there because there’s always been a need for a light when the sun goes down before 10 o’clock and through that area,” he said.

It will light up when it gets dark and help prevent vandalism, he said.

Parks Board member Michelle Boxell complimented Gardner and his laborers for the hard work they put in on sanding down and restaining the picnic tables to make them look nice.

“I know it’s early in the summer and we’re probably the first ones to rent them, to get them for an event, but we had our event today – I didn’t have to wash them. They were in such good condition, I was like, ‘Maybe these are brand-new tables,” she said.

Gardner said they try to stay on top of them through the summer.

“They were in terrific condition, so thank you very much,” she said, adding that a lot of people commented on the Warsaw Park Department tables. “So thank you.”