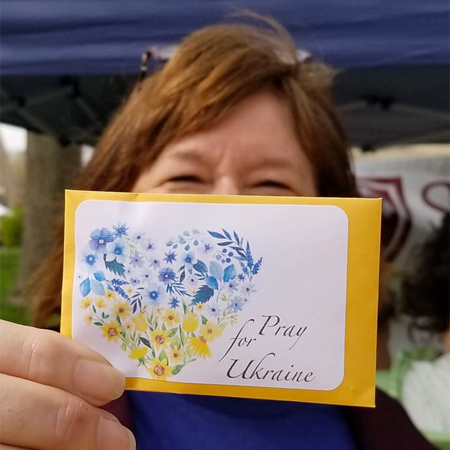 Sandra Buchanan displays one of the seed packs distributed Saturday during One Warsaw Celebrating Us. InkFreeNews photo by Dan Spalding. 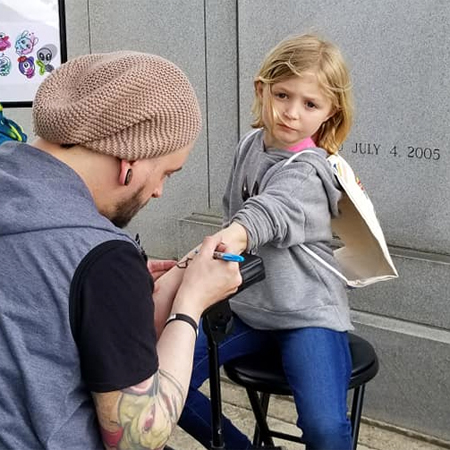 Nathan Underneath applies a free sharpie tattoo on the arm of Audelline McFarland. InkFreeNews photo by Dan Spalding. 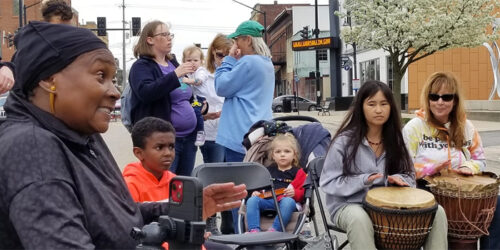 WARSAW – Can flower seeds, drum circles and the sport of cricket help bring a community together?

For a few short hours in Warsaw, it certainly seemed so.

One Warsaw’s annual diversity festival on Saturday, April 30, in downtown Warsaw, was shortened by rain, but still saw a turnout far bigger than the previous two years.

One Warsaw Celebrating Us was scheduled to run from 4-8 p.m., but strong winds and a forecast for heavy rains cut it in half.

Despite the rain, Shari Benyousky, one of the organizers, was excited about the turnout.

She said they received lots of calls from other groups wanting to participate after the festival’s deadline.

She thinks the festival is catching on. “So many people are jazzed about it that it will absolutely be a permanent fixture,” Benyousky predicted.

Two hours seemed like enough time for spectators to see some of the early performances, grab some food and check out 36 booths spread around the Kosciusko County Courthouse.

Here is a sampling.

Members of the Warsaw Cricket Academy were letting anyone try to swing a cricket bat and learn more about the game.

The club had been playing and practicing at the Kosciusko County Fairgrounds, but will be shifting to Lakeland Christian Academy this summer, said Vishnu Teja Bhavirisetty.

The club’s booth included a display of plans for the city’s future park adjacent to the airport where a cricket field has been proposed.

The fact that cricket is growing in popularity in a small rural town in Indiana, he said, is quite unique.

“Everyone in Warsaw is really encouraging us. They’re always supportive. They treat us like family,” he said.

One of the youths who took a few swings was Brayden Oswalt.

Brayden’s mother brought him to the festival. Like many in Indiana, she and her son were unfamiliar with the sport until Saturday.

“I didn’t know what it was before he came over and asked them,” she said.

Afterward, he posed with cricket players for a photo.

“With his challenges with Autism and ADHD, I thought it would be really cool to walk around here,” his mother said.

The percussion of a drum circle pulsed along Center Street shortly before strong winds and rain briefly arrived.

Rogers, a former Fort Wayne police officer, has been drumming for 44 years and thinks it can bring people together.

“It’s the one instrument that is connected to the main organ in your body that pumps blood,” she said. “Once your heart stops, you’re no good.”

She added, “Everything I do is about community, family and children and to connect us and break down the disconnects,” she added.

Maybe one of the coolest items being distributed at booths Saturday were Sunflower seed packets given away by St. Anne’s Episcopal Church.

Church member Sandra Buchanan said they’ve been praying for Ukraine each week and a prayer service was held shortly after Russia invaded the country.

The symbolic seed giveaway began in Ukraine and has spread globally as a form of protest against Russia’s war.

“I think it’s a crime against humanity. I’m not speaking for the church, but we all feel that way that it’s a travesty. It’s heartbreaking,” she said.

Many of the booths offered services and advice.

The anti-tobacco booth included shirts, hats and information associated with a campaign to educate youth about the dangers of vaping.

Representatives of the group said they are transitioning to a new name, Breathe Well.

They said they would also like to see smoking banned in municipal parks. Winona Lake has a smoke-free park policy, but that’s not the case in Warsaw or Syracuse, according to Jessica Camarena, a coordinator for the coalition. 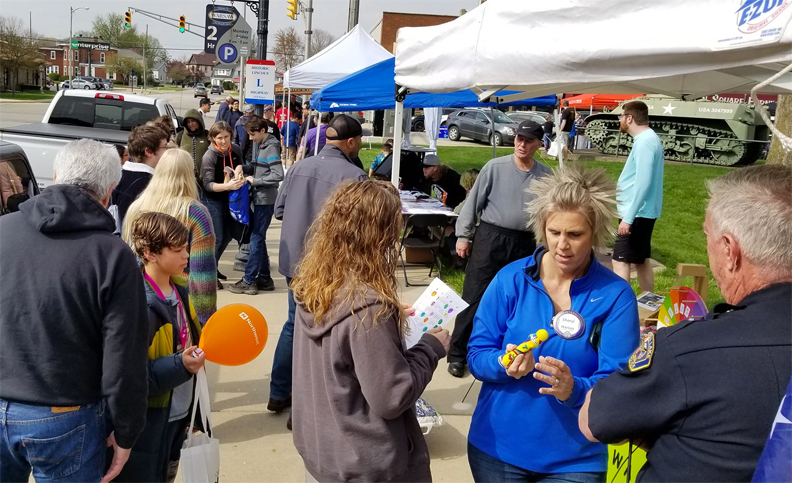 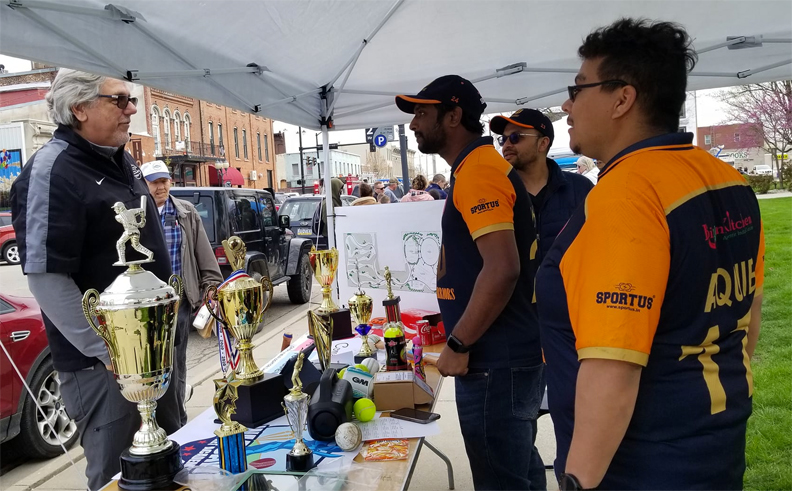 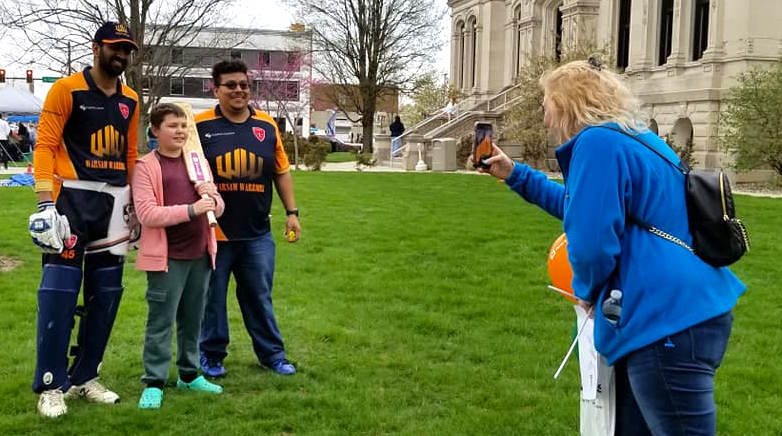 Brayden Oswalt has his photo taken with members of the Warsaw Cricket Academy. InkFreeNews photo by Dan Spalding. 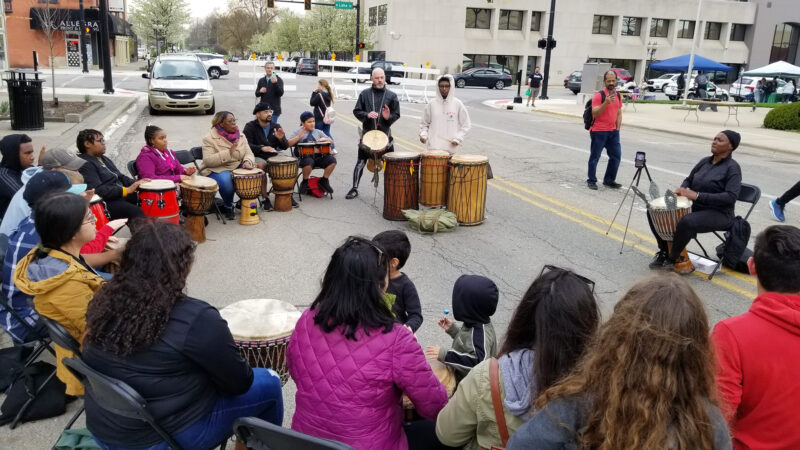