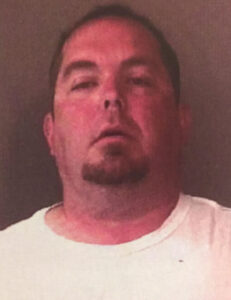 WARSAW — A Pierceton man will serve eight years in prison after operating an off-road vehicle while intoxicated, resulting in the death of his best friend.

Joel R. Zehner, 41, 21 EMS R4 Lane, Pierceton, was charged with causing death when operating a vehicle while intoxicated, a level 4 felony. A charge for leaving the scene of an accident was dismissed as part of a plea agreement.

On April 11, 2020, an Indiana Conservation Officer responded to an off-road vehicle crash with injury in the area of EMS R4 Lane, just east of Ridinger Lake in Pierceton. Upon arrival at the scene, the officer noticed a half-full bottle of whiskey and a beer can.

Witnesses at the scene said Zehner had been operating an off-road vehicle when the vehicle flipped and landed on its passenger. The passenger, Jason R. Tolle, 45, Pierceton, was severely injured.

According to court documents, after the accident, Zehner fled the scene on the off-road vehicle.

At the scene, Tolle was unresponsive and was airlifted to a hospital. He later died from injuries sustained in the accident. After an extensive search, Zehner’s off-road vehicle was found about three miles from the scene. Deputies from the Whitley County Sheriff’s Department found the vehicle and also found Zehner, who had a handgun to his chin while on a cellphone.

Officers persuaded Zehner to set the firearm down. Zehner said he and Tolle were having a few drinks and that he was driving around on the off-road vehicle when he lost control of it. Officers also noticed Zehner was exhibiting several signs of intoxication. A portable breath test resulted in a 0.157% BAC.

Zehner told officers he did not mean to harm Tolle. He said he remembered the crash and left the scene since he was scared of what just occurred.

Zehner has two prior convictions out of Kosciusko County for operating while intoxicated.

Several people spoke on Zehner’s behalf, including four family members and a best friend. Eighteen letters of support from Zehner’s family members, friends, and neighbors were also submitted as evidence. About 15 people attended the sentencing in support of Zehner, including Tolle’s widow.

All five of the witnesses who spoke about Zehner’s character described him as compassionate, with a strong willingness to help anyone in need. They also testified to the changes they’ve noticed in Zehner since the accident.

“He is extremely remorseful from the inside out,” said Sirenna McDonald, Zehner’s sister. “Every ounce of him feels regret every day. He’s such an important part of my life and I can’t imagine what life would be like without him.”

Christine Meck, Zehner’s aunt, said alcohol was the enemy in this tragedy and that Tolle’s death has affected Zehner horribly.

“This was an accident,” said Christine. “Joel has always been the most precious human being and has touched so many in a positive manner. What’s in the past you cannot be defined by.”

Zehner’s mother, Kathleen Zehner, recalled when her son was arrested and told her that he would never drink again.

“He (Joel) is one of the most understanding people I’ve ever met,” said Kathleen. “He is paying for this for the rest of his life, through the mistake he made. He’s learned from this.”

Al Meck, Zehner’s uncle, said Zehner was being treated like a hardened criminal when “he’s a human who made a mistake.”

“This was an accident,” said Al.

Al and Kathleen both said that Zehner left the scene out of fear for what he did and was contemplating suicide after the accident.

The final witness to testify was Brian Becknell, Zehner’s childhood friend. Becknell said Zehner goes out of his way to help anybody and that his children call him “Uncle Joel.”

“He has the biggest heart and would be way more valuable to the community outside,” said Becknell. “What happened eats at Joel every day.”

Becknell said Zehner and Tolle enjoyed fishing together, and would take his children fishing.

Deputy Prosecuting Attorney Mark Caruso noted this incident being Zehner’s third arrest for operating a vehicle while intoxicated. He also said Zehner’s BAC level was not a mistake, but a choice.

“This was the loss of a brother, a best friend, a husband,” said Caruso. “Nobody wins in these types of cases and I feel sorry for both families.”

Defense Attorney Robert Gevers argued for probation, emphasizing that Zehner was not an individual who needed to serve a lengthy prison sentence.

“Whatever happens today won’t bring back Jason,” said Gevers. “This man (Joel) is punished every day by remembering what he did.”

“There’s not a day that goes by that I don’t think about what happened,” said Zehner. “It was because of me that we lost a great man and I miss him every day, so much.”

In his statement to the court, Zehner said he would never consume alcohol again.

Kosciusko Superior Court Three Judge Chad Miner recognized Zehner’s genuine remorse and acceptance of responsibility as mitigators; however, he argued that Zehner’s criminal history and decision to leave the accident scene were aggravators that outweighed the mitigators.

“The choice to operate while intoxicated was not an accident,” said Judge Miner. “It was a choice.”

For causing death when operating a vehicle while intoxicated, Judge Miner sentenced Zehner to eight years in the Indiana Department of Correction. He recommended Zehner for Recovery While Incarcerated during his sentence.

After sentencing, Zehner was remanded to the custody of the Kosciusko County sheriff.