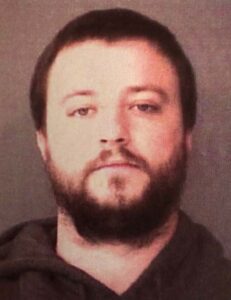 SYRACUSE — A Syracuse man was recently arrested after allegedly choking a woman in the presence of a child.

On March 11, a woman contacted the Kosciusko County Sheriff’s Office to report a battery that occurred in Syracuse on March 4. The woman told a KCSO deputy that on March 4, she was getting ready to travel to Michigan when she and Collins had a verbal altercation.

According to court documents, Collins was intoxicated and upset. The woman placed a child into her vehicle and attempted to leave when Collins got into the back of the vehicle to retrieve his belongings. Collins allegedly became violent and reached around the driver’s seat where the woman was sitting; he began to choke her with his arm.

The woman told the deputy she hit Collins’ right forearm to get him to release his chokehold. Collins then became more upset, punched the vehicle’s navigation system, and punched the woman in the chest. Collins fell out of the vehicle, and the woman left the scene. The woman said she had bruises on her chest, which she took pictures of on March 7.

The deputy then spoke with Collins about the altercation. Collins said the woman almost ran over his foot when he went to remove his belongings from her vehicle. He also said the woman bit him on the arm.

Collins was booked in the Kosciusko County Jail on April 18, with a $6,000 surety and cash bond.