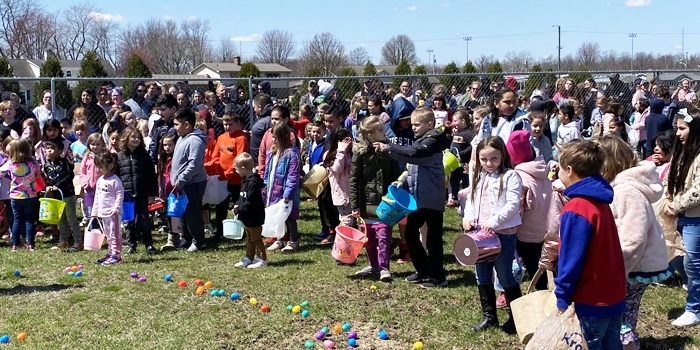 WARSAW — There were approximately 38,000 eggs collected in Warsaw on Saturday, April 16.

Of the three hunts, one marked a return after being cancelled for several years due to COVID-19, one was held in a new location and one was brand-new.

The Kosciusko County Fair Board’s annual hunt at the fairgrounds returned after a two-year hiatus due to COVID-19. It also returned outdoors after being held indoors a few years related to the weather.

“I think it’s awesome. I mean everybody’s been cooped up, and not being able to do anything,” said Fair Board member Kristen Messmore regarding the return.

Kids hunted for 32,000 eggs across the midway, basketball court, track area and cabin area. One child in each age group who found a special egg got to take home a new bicycle.

Warsaw Evangelical Presbyterian Church hosted the hunt at the courthouse on Saturday afternoon.

Though the church has had a hunt at its building for multiple years, this was only the second year the church invited the public to it as well.

“We just want to bring joy to the community,” explained hunt organizer Angela Ayers of why the church opened up the hunt to the public. “That’s really a theme that we’ve been having in our church, just our vision, our mission for who we are as a church, to bring joy to our community. So as many opportunities as we can to do that, that’s what we want to do.”

The church’s hunt was held at Central Park last year, with it moving the event to the courthouse lawn this year due to “some issues with the … inflatables and the food truck,” said Ayers.

Kids could enjoy sliding down an inflatable slide and jumping in a bounce house. There was also food available from Shawnanigans.

Of the 3,000 eggs hidden, some were special eggs, which allowed kids to get free macaroni and cheese from Shawnanigans.

“We’re really, really pleased with being able to have it right here downtown just right by our church. … I think we’ll try to do it here again in the future if we can,” said Ayers.

Ayers added if people in the community needed somewhere to attend church services on Sunday, April 17, for Easter, they were welcome to come to Warsaw Evangelical Presbyterian. Services are at 8:30 a.m. and 11 a.m. at the church at 210 S. High St.

It was the first year for a hunt at the CCAC.

Children collected 3,000 eggs spread out over three ball diamonds at the complex. Some of them also got money for finding special eggs.

CCAC Executive Director Mike Hagy said “community involvement” was the reason for having a hunt.

“We did a trick-or-treat in the fall when I was first hired in and now we’re doing an Easter egg hunt,” he said. “I’m really just looking to get more community involvement.”

“It’s kind of a learning experience this year and (we) hope to … get bigger and better for next year,” said Hagy. 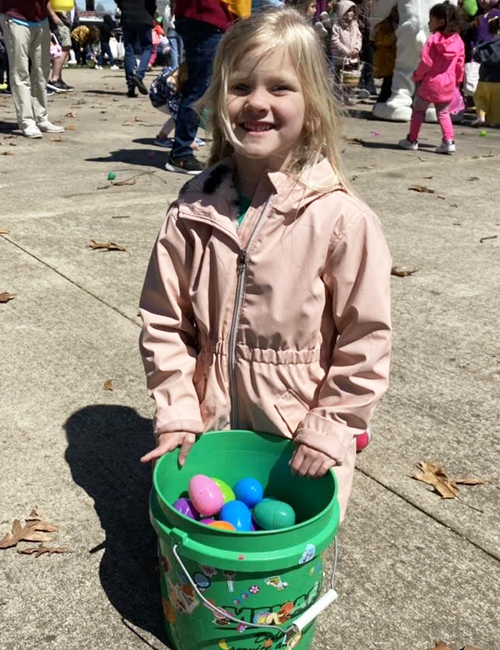 Amelia Devlin smiles for the camera after collecting eggs at the fairgrounds. 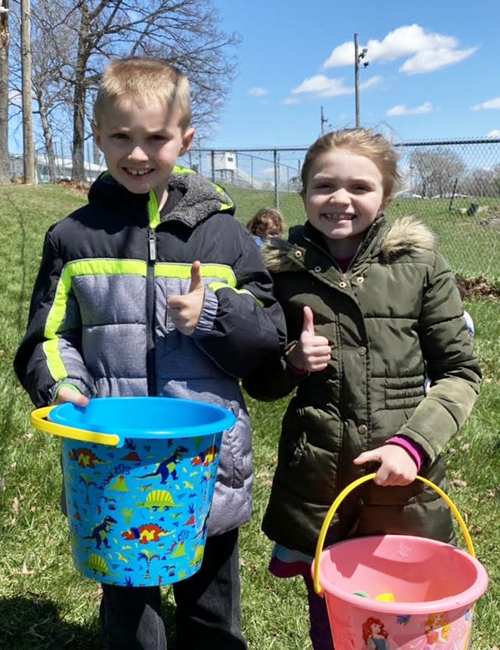 Siblings Colton Hunt, left, and Skylar Hunt give thumbs up after hunting for eggs at the fairgrounds. 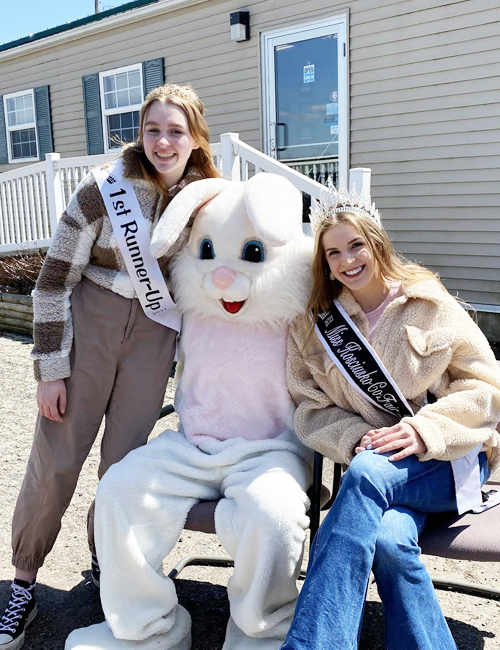 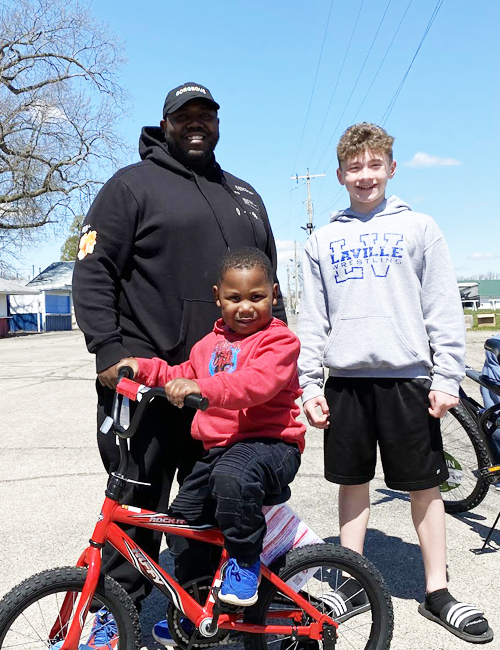 Zion Watson, 4, of Warsaw, won a bicycle for finding a special egg while hunting in the ages 3-5 group at the fairgrounds. Here, he poses on his bicycle with his father Roberto Watson, left, and Lawrence Wood, who donated bicycles for kids to win in the different age groups. 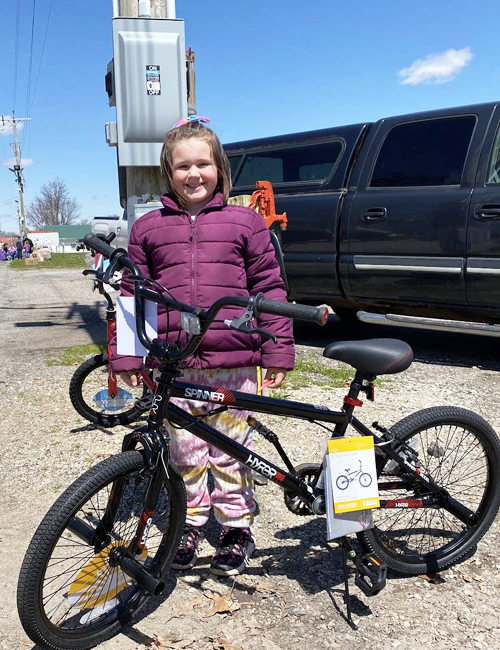 Miaya Keener, 6, of Warsaw, found the special egg in the ages 6-9 group while hunting at the fairgrounds and took home a bicycle. 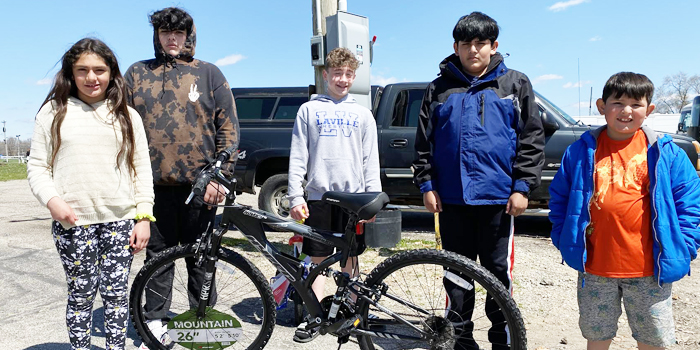 Ismael Hernandez, 11, of Etna Green, won a bicycle for finding the special egg in the ages 10-12 group at the fairgrounds. Here, he poses with his siblings and Wood. From left: Erika Hernandez, Javier Hernandez, Wood, Ismael Hernandez and Fabian Hernandez. 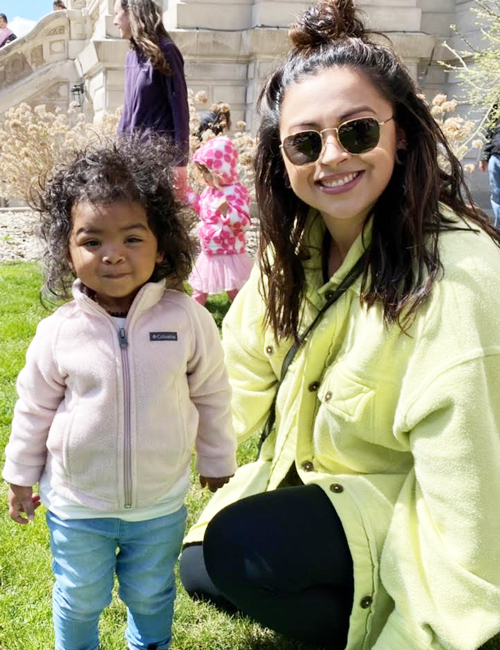 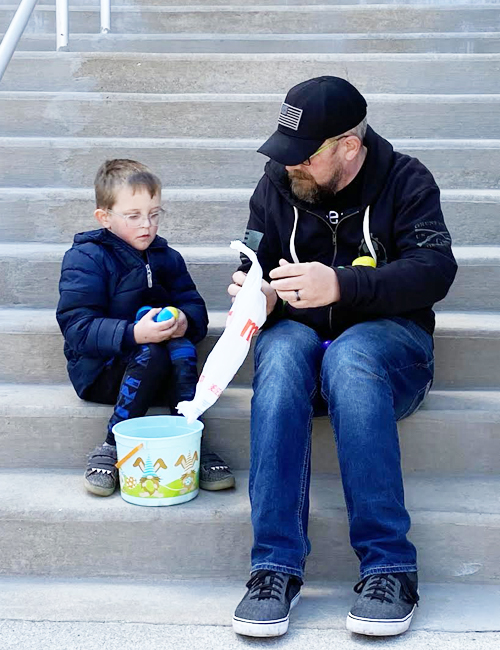 Zahcary Ross, left, and his dad Heath Ross go through eggs on the courthouse steps following the hunt. 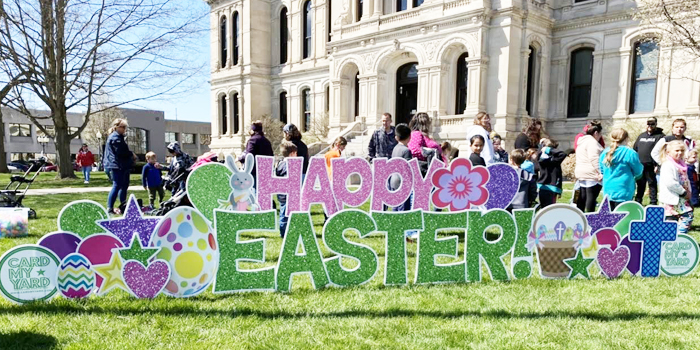 Warsaw Evangelical Presbyterian Church put out a large sign for the hunt on the courthouse lawn. 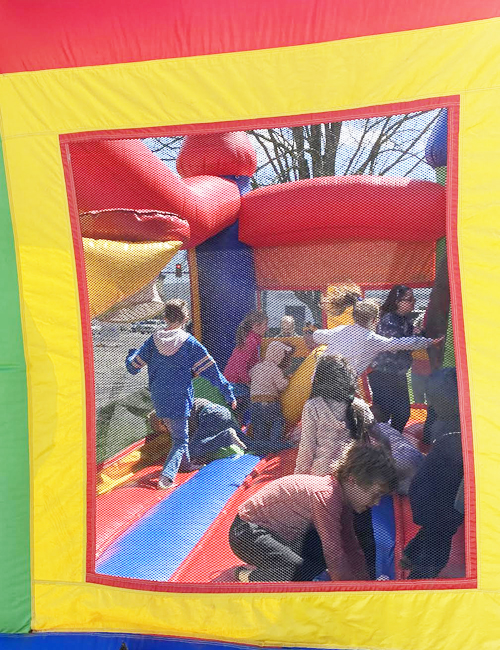 The bounce house at the church’s hunt was quite popular. 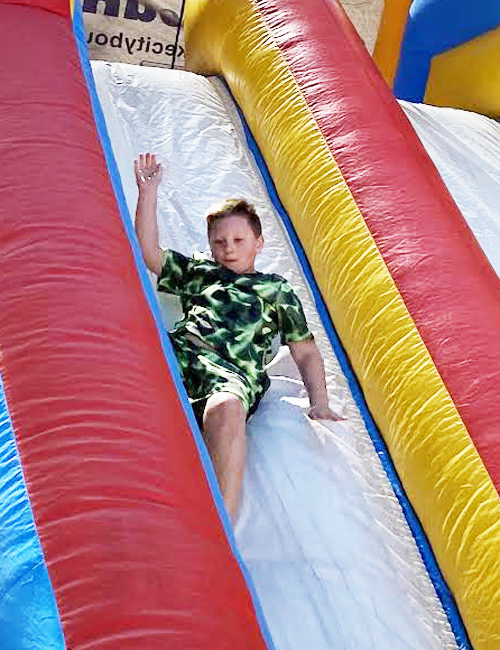 Elijah Stanton slides down an inflatable slide at the church’s hunt. 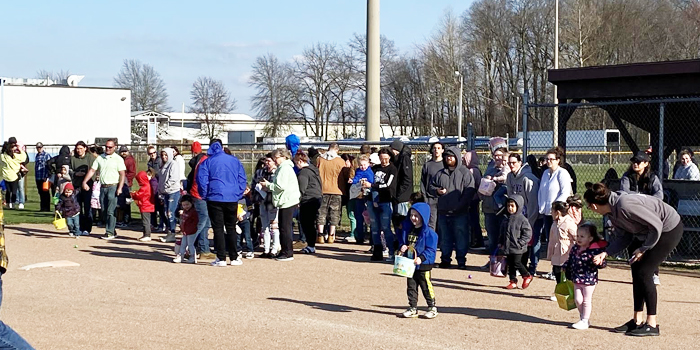 Those in the ages 2-5 group get lined up at the City-County Athletic Complex’s hunt on Saturday evening. 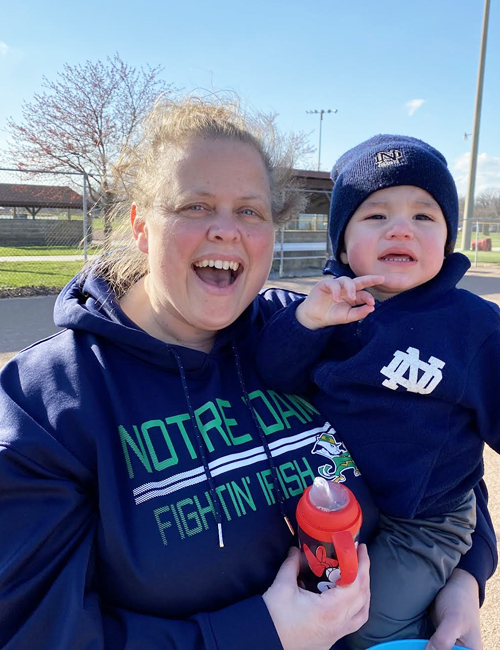 Cindy Birnell, left, who’s friends with CCAC Executive Director Mike Hagy, came all the way from Winamac with her grandson Aiden Harvey for the athletic complex’s hunt. It was the first hunt for Aiden, 20 months. 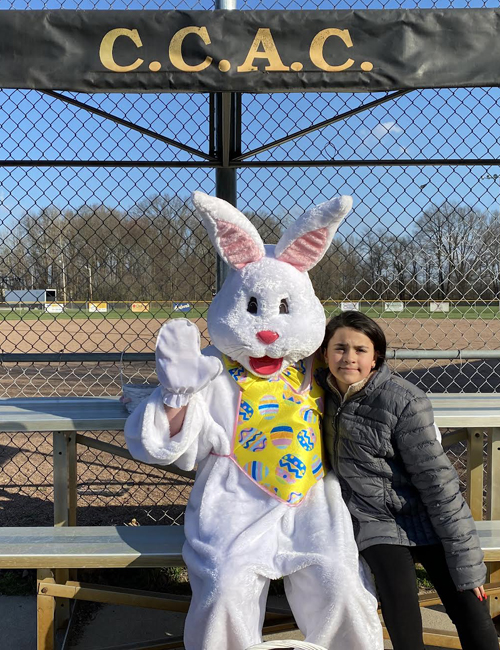 Natalia Parra hangs out with the Easter Bunny after the hunt at the CCAC. 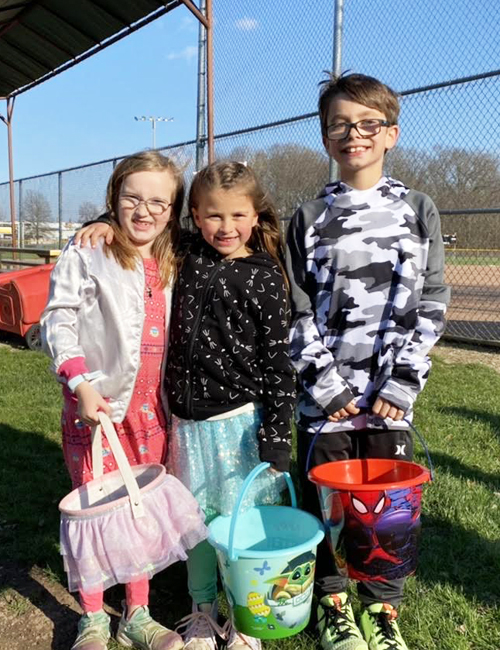 Leo McCarty, right, came out to the CCAC’s hunt with his sister Cheyenne Baugher, center, and their cousin Makenzie McClelland.