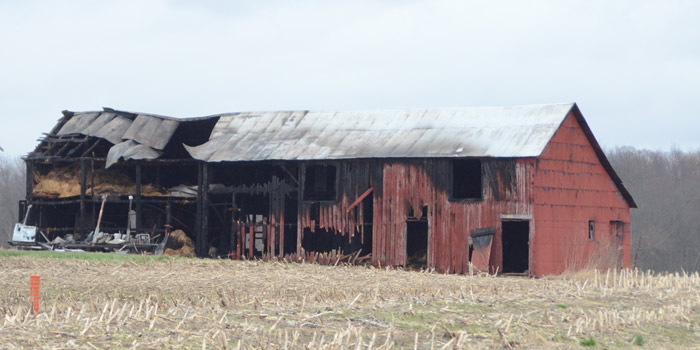 Tippecanoe Township Fire Territory with assistance from Turkey Creek Fire Territory, Leesburg, Milford and Pierceton fire departments responded to a barn fire Wednesday evening on CR 650E. On the left in front of the barn are the remnants of an RV, which is believed to have caught fire and spread to the barn. The cause is still under investigation.

NORTH WEBSTER — The cause of a fire that destroyed a barn at 7130 N. 650E, North Webster, is still under investigation. Tippecanoe Township Fire Territory was alerted at 10:11 p.m. Wednesday, April 6. A full assist from Turkey Creek Fire Territory and tanker assists from Pierceton, Leesburg and Milford were requested.

Fire Chief Jeremy Likens stated it is believed the fire started in a recreational vehicle parked beside the barn and spread to the structure. When firefighters arrived the barn was fully involved.

Approximately 25 firefighters responded to the scene. Because the barn was located along a back lane, water was pumped from the road to the structure.

“We had a good stop,” stated Likens.

Tippecanoe firefighters were at the scene until approximately 2 a.m. Thursday, April 7.

The barn is owned by Roger and Sandi Miller.