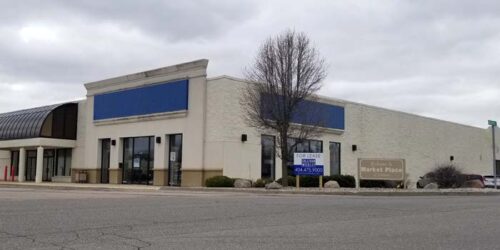 Big Lots will open a 30,000-square-foot store at the northwest corner of the Marketplace of Warsaw Shopping Center, where Pier One had been located. InkFreeNews photo by Dan Spalding.

WARSAW – The first two tenants committed to moving into the soon-to-be revamped Marketplace of Warsaw have been announced.

A spokesman for Sullivan Wickley confirmed to InkFreeNews that representatives for Big Lots and Planet Fitness have signed leases for the shopping center.

The Big Lots store will be located in a corner position, where Pier One Imports had been.

The shopping center, he said, will look much different by the time the holiday shopping season arrives.

He said Big Lots has redesigned its floor layout for new stores after acquiring Broyhill Furniture about two years ago.

Big Lots had a store on Lake Street in Warsaw years ago. The company’s nearest stores are in South Bend, Elkhart and Huntington.

Planet Fitness is expected to move into the old Sears store after renovations.

Sullivan Wickley purchased the struggling shopping center last year, pledging to renovate the property, which is near the corner of Center Street and US 30.

The shopping center has seen numerous tenants pull out in recent years. And in recent months, Sullivan Wickley also chose not to renew leases for three tenants.

While the west side of the center has seen numerous departures – including Carson’s, Sears and Pier One Imports –  the east side has a BMV, a coffee shop, Subway and several other retail outlets.

While the west side of the shopping center has lost numerous tenants, the east end is doing much better. InkFreeNews photo by Dan Spalding.