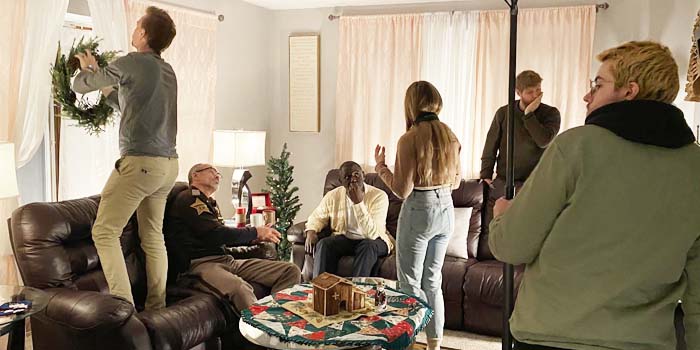 The drama “Now I See,” is being filmed in Kosciusko and Fulton counties. Pictured on Monday, March 28, the cast and crew prepare for a scene shot in a house in Mentone. From left: Producer Joshua Stutzman sets up a wreath for the Christmastime-set film as actors Steven Ogg and Leajato Robinson listen to screenwriter and director Carissa Stutzman and crew members get ready for the scene. InkFreeNews photos by Leah Sander.

MENTONE — Christmas has come back to Mentone.

Those visiting the town recently may have noticed that holiday decorations have appeared again. They’re back up for good reason as part of the backdrop for the movie “Now I See.”

The production is currently being filmed in Mentone as well as in Rochester and Talma in Fulton County.

The Kosciusko/Fulton county area was picked for filming in part because of the local connection of the movie’s producer Joshua Stutzman. He’s originally from Mentone.

He told InkFreeNews that his wife Carissa Stutzman, the film’s director and screenwriter, was “inspired by the town” and one old house in particular after a visit to Mentone. That led to her writing the script.

The drama, “Now I See,” tells the story of Claire Lewis, a blind woman who goes out looking for her missing six-year-old daughter, Briar, following the girl’s disappearance at Christmas.

“The core theme and message is a mother’s love for her daughter,” said Joshua Stutzman.

Filming started last week and is expected to wrap up next week. The small production includes 21 roles with speaking parts and six main cast members.

Among them are Annalise Basso who’s played LJ Folger on the TV series, “Snowpiercer,” and Steven Ogg, who appeared as Simon on “The Walking Dead.”

“It’s a beautiful story,” Ogg said. “It’s always nice to be of service to someone who’s got a dream and a passionate project, which they do.”

“Now I See” marks a foray into a fictional film for the Stutzmans, who’ve previously worked on documentaries. The couple co-founded the company Anthem Entertainment based in Santa Barbara, Calif.

Filming thus far has taken the cast and crew to multiple spots in Mentone, including Ace Hardware and the Bulldog Saloon, and the Fulton County Courthouse in Rochester.

Joshua Stutzman said he’s grateful for people allowing the crew to shoot in the locations and putting Christmas decorations out as well as the Kosciusko County Sheriff’s Office for its technical help with “Now I See.”

He said there will be nine months of post-production work before the roughly 90-minute movie is ready.

He’s hopeful the film will be released in theaters in 2023. 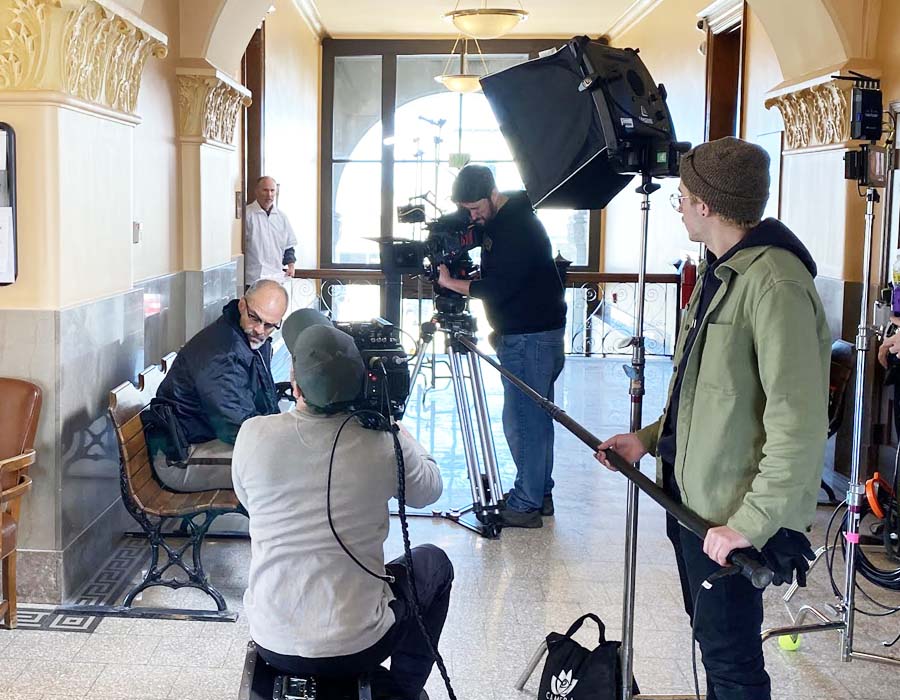 A scene shot inside the Fulton County Courthouse in Rochester Monday includes Ogg, left, and actor Daniel Lee in the background. 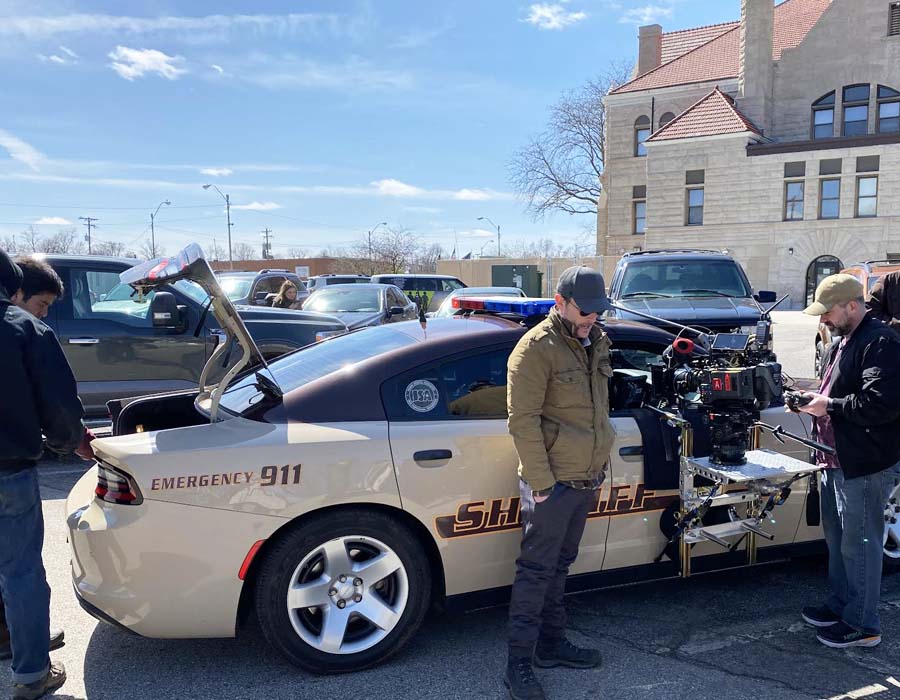 The crew preps a Kosciusko County Sheriff’s Office car for shooting outside the Fulton County Courthouse on Monday.