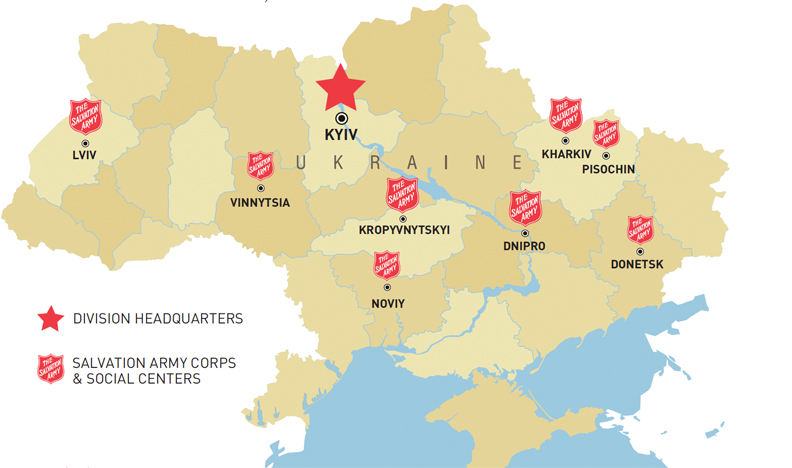 BUCHAREST, ROMANIA – The Salvation Army Indiana Division has sent its top Emergency Disaster Services official to Eastern Europe as part of the organization’s large-scale response to the Russia-Ukraine crisis.

Major Mike McKee, the Emergency Disaster Services Director for the state, has more than three decades of experience responding to crises across the globe. Earlier this week he traveled to Romania, where he is now working with the local Salvation Army team to address the needs of Ukrainian refugees fleeing to the country.

The Salvation Army has permanent facilities and services across Eastern Europe, which have played a key role in providing immediate aid to refugees.

Led by The Salvation Army’s Eastern Territory, the response to the crisis in Ukraine has been widespread. The organization is currently aiding refugees fleeing to Romania, Moldova, Slovakia, Poland, Czech Republic, and other countries across the continent. Local responses include a variety of services, like large feeding stations, temporary housing, hygiene and health supplies, family reunification assistance, and spiritual and emotional care. Salvation Army facilities in southern Russia are also responding to the great need in the country, where 60,000 displaced people are caught in the middle of the crisis.

In Ukraine, The Salvation Army has corps and social centers spread across the country, where the organization is still actively serving the besieged and suffering communities of Kharkiv, Donetsk, Dnipro, Noviy, Kropyvnytskyi, Vinnytsia, Lviv, and the capital, Kyiv. Salvation Army officers and staff are working around the clock to do all they can to help their fellow Ukrainians in this terrifying time. Though an estimated 3.5 million refugees have already fled the country, millions more are trapped and unable to get safe transit across the border.

Anyone looking to support The Salvation Army’s efforts in Eastern Europe are encouraged to give through a special donation portal that has been set up by the organization’s World Services Office.  This ensures that funds can quickly be funneled to operations on the ground. Visit https://salarmy.us/ukrainecrisis to support this global fundraising effort. Supporters can also text the keyword UKRAINE to 52000 along with the amount they would like to contribute.