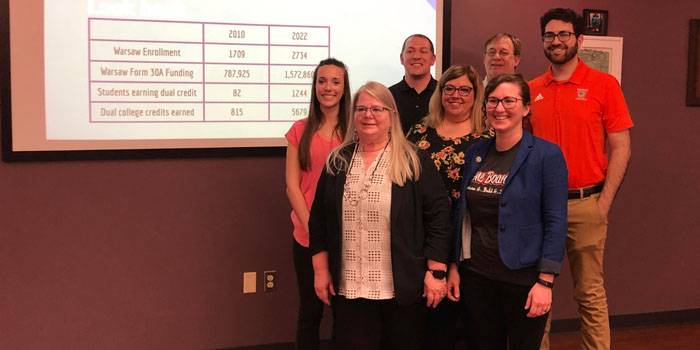 WARSAW — Warsaw Area Career Center Director and Principal Ronna Kawsky, who is retiring this year, was recognized at a March 21 Warsaw Community Schools’ Board of Trustees meeting.

Since Kawsky became director, the WACC has grown significantly in student enrollment and the number of college credit hours students have received.

“I’m very thankful to have worked all these years with such an awesome group of leaders,” said Kawsky.

“What you’ve been able to help craft here in the Warsaw Area Career Center is something special,” said WCS Superintendent Dr. David Hoffert.

Hoffert said a Google search showed it costs students, on average, $445 per credit hour at a public college, and $1,081 at a private school. Based on last year’s number of college credits students earned at WACC, the community saved anywhere from $2.5 million all the way up to $6.138 million.

“Ronna’s leadership at the state…if you go down there, they know Ronna Kawsky and what she’s done for the career center,” said Barkey. “Her name is going to be around for a long time. We are losing a gem. When I have a problem, Ronna is my go-to.”

“It does my heart well to see a drive in the education world that not everyone is set for college and that’s not your only choice,” said WCS Board Member Brad Johnson. “I love to see the opportunities for students to get exposed to this type of education.”

In other business, Dr. David Robertson, assistant superintendent of elementary education, presented two school safety updates to the board.

Robertson said the district is in the process of rolling out RAPTOR Alert through an app on school-issued devices. The app will provide staff with access to building safety plans, as well as allow them to ask for emergency help at any location within a school.

WCS will also be part of a countywide safety drill in June. All of Kosciusko County’s school corporations, as well as law enforcement, fire departments, emergency medical personnel, and street departments, are participating. The drill is run through the Department of Homeland Security.

“It’s really designed to walk us through step-by-step on how each agency would respond to a potential active threat at a school,” said Robertson. “This is the first step in a process that we are making in ‘One County, One Response’ protocol. Marshall County’s been on this for a couple years now.”

In a brief report, Hoffert told the board that the tennis court project at WCHS is close to completion. Hoffert said renovation projects within the WCHS building will also begin at the end of May. Signage and written releases will be published on changes in traffic flow patterns and accessible doors at the school.

The board’s next work session is at 4 p.m. Tuesday, April 12, at the WCS central office. Their next regular meeting is at 7 p.m. Monday, April 25, at Harrison Elementary School.