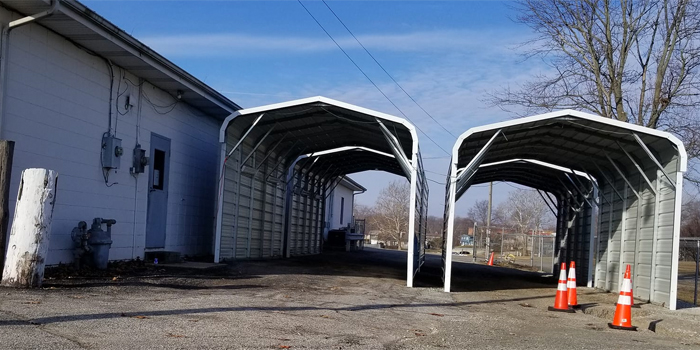 Demand for testing at the Kosciusko County Fairgrounds test site has dropped to a trickle. InkFreeNews photo by Dan Spalding.

WARSAW — There were no parades or major announcements, but it appears that across much of the country, the state, and Kosciusko County, the two-year-long COVID-19 pandemic is quietly entering a new stage.

The disease is credited with killing 225 in Kosciusko County and about 22,139 in Indiana.

But in recent weeks, the Omicron variant has faded and all of the factors related to the disease – cases, hospitalizations and deaths – have plummeted.

The change in direction is especially clear at the free testing site run by the Bowen Center at the Kosciusko County Fairgrounds in Warsaw. At one point at the peak of the crisis, the clinic was providing upward of 200 tests a day.

On Tuesday, March 8, about six people came through the drive-thru.

“We’ve seen a very drastic decline in clients,” said Jemina Fugate, the COVID-19 site team leader at the clinic. She was one of two people working at the site Tuesday.

Transitioning from a pandemic to an endemic is an acknowledgment that the disease has been tamped down from a world health crisis to one in which regions across the globe will likely continue to struggle with the disease.

Evidence of the changes has been accumulating in recent weeks.

In Indiana, Gov. Eric Holcomb, pushed by lawmakers, agreed about a week ago to end the state health emergency status.

President Joe Biden, in his State of the Union speech last week, announced the next phase of its COVID-19 strategy, which notably includes a new “test to treat” strategy to increase access to antiviral pills. The federal government is also continuing to make free home tests available online.

Close to home, the use of masks in large stores has all but disappeared. And Warsaw Community Schools – the only district in the county to mandate masks – dropped that rule in January.

Mayor Joe Thallemer, who hosted weekly press conferences on the pandemic and spoke in strong support of testing and vaccines, was expected to touch on COVID-19 in his State of the City address Wednesday, March 9. But much of his address will focus on numerous projects as the city has in the works as it continues to grow.

At the same time, mask mandates are being dropped this week in Chicago public schools, Puerto Rico and the District of Columbia.

He suggests people continue to be vigilant if they become ill and have symptoms consistent with COVID-19.

People who have begun the steps toward vaccination should continue, he said.

“And you know, it’s not too late to start them because we don’t know what the future holds,” Weaver said.