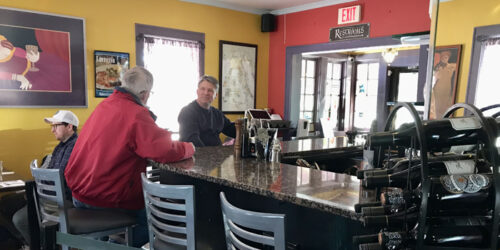 Some patrons relax at the bar at Lucrezia Café. 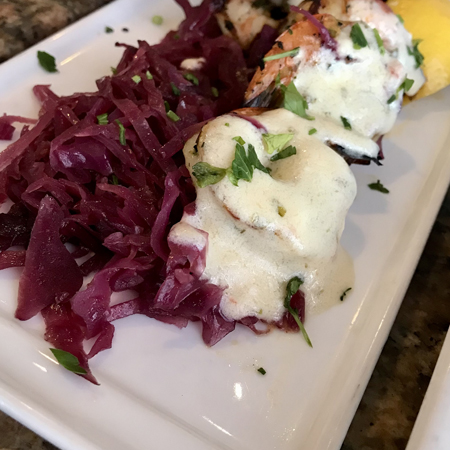 Grilled shrimp with braised red cabbage at served up at Lucrezia Café. 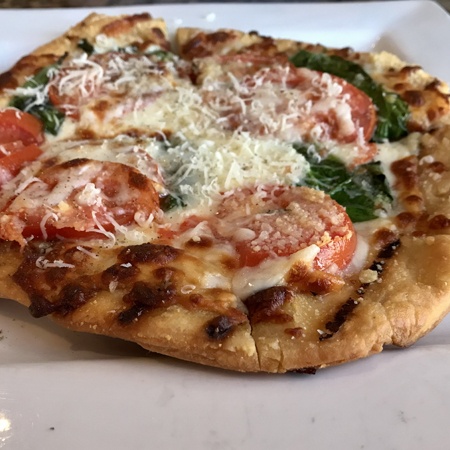 CHESTERTON – “Good,” said Tony sleepily. “It was all good.” I rolled my eyes and kept driving.

“Seriously,” I pressed. “Tell me something interesting.” The sun had reached the western horizon as we drove south. We had spent the morning volunteering as Speech Judges at a Chesterton High School tournament.

Where’s Chesterton? That had been our first question when Warsaw High School Speech Coach Kathryn Anders had asked too. Especially since the trip required arriving at 7 a.m. If you’ve been to the Indiana Dunes, you’ve been through Chesterton. If you’ve driven to Chicago on SR 49 right before Valparaiso, you’ve almost been there too. Turn left one major street AFTER the exit for the toll road to get to Chesterton. It’s a little town of 14,241 according to the 2020 census, but it was well worth a trip, even an early morning one. 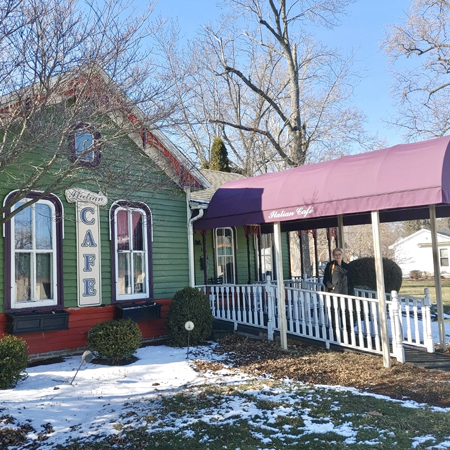 Two of the stops were at the Lucrezia Café (above left) and Olivezia (right). 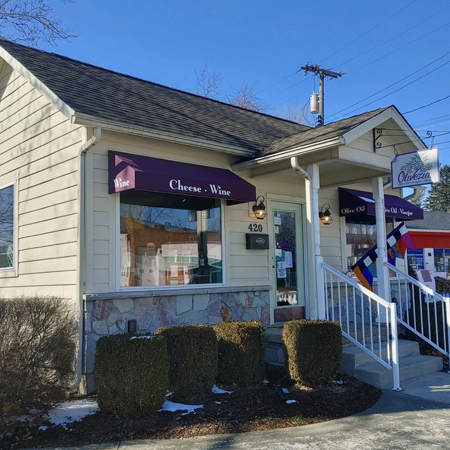 After a morning of hearing amazing high school students dressed in suits, we needed somewhere to digest the mass of difficult and inspiring speeches we had heard (toxic nostalgia, how to view failure as a part of success, difficulty in being half Asian and half white, and the invisibility of being a black woman were just a couple of the thoughtful speeches we heard). Tony loves all things Italian, so we stopped at a cute bright green house on the corner of Porter and S. Calumet Streets. Snow crusted the outdoor patio, and award stickers plastered the door. When I opened the door, the room looked full. “Come, come,” waved the hostess. “We have another room.” The place appeared to be a well-renovated house. We stepped around the bar to another charming dining room. It had a cool copper ceiling fan, large, framed art, and fabric napkins folded like fans. Our waiter cheerfully handed us menus and offered small glasses of wine, Italian-style. We decided to share some appetizers and soup – Minestrone, Clam Chowder, four-cheese Italian white pizza, and grilled shrimp with braised red cabbage. A basket of Italian bread arrived with a bottle of fruity olive oil to dip.

“See,” Tony opened one eye as I was ticking off things to remember. “It was all great. Don’t forget their sister store next door which sold Italian stuff.”

Tip: Stepping out the front door of Lucrezia after lunch, look for Olivezia next door. The sign out front says olive oil, vinegar, wine, and cheeses. Inside, the proprietor offered free tastes of “anything.” We walked out with some fig jam and an $11 bottle of Via Laguna from Croatia. In the brisk wind, it was like carrying a slice of summer promise.

Now what? We had another hour and a half to fill and Chesterton isn’t large. It appears to be mostly a sleeper community for people working in Chicago. We had intended to go up to Indiana Dunes to the Interactive Learning Center, but Google was wrong about it being open. So, we looked for what else was interesting and found an antique shop a few blocks over. 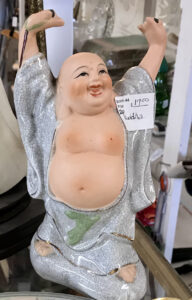 The faded sign swung in the breeze and icicles from the roof melted steadily in a river across the sidewalk. From the outside we couldn’t tell if more treasures or castoffs were stacked inside. “I’m still not sure.” Tony came to consciousness in the car again. “Definitely interesting. Definitely, well…interesting. Interesting-good.”

Old deer antlers, a ladybug jacket, shaving kits, knives and old helmets from WWI, cookbooks from every known cuisine, a suspiciously gleeful buddha, enormous handmade wooden cabinets with secret compartments, and pink wooden clogs with painted windmills. Old leather baseball mitts, PEZ containers, heavy silver rings, and bug-eyed glass roosters. Everything someone had once needed now jumbled together, pieces of stories long forgotten. We wandered through the entire warren wanting to buy something, but finding one thing, any one thing, was too difficult. Apparently, other people didn’t find this to be the case, as we had to duck through a line a dozen people long at the register. But we decided to call it entertainment only.

Were we finished with the trip? The early morning beginning made late afternoon thinking difficult. But no travels of ours would be complete without books, so we needed another shortstop.

Two well-stocked little libraries sit next to each other on the way home – one for kids and one for adults. Our stop netted a solid copy of City of Embers by Jeanne DePrau, a book my teenagers highly recommended. Need a book, take one. Have a book, leave one.

Tip: stopping at free little libraries helps clean those old books out of your back seats. Not the old water bottles and crumbs though.

WHAT WE WILL GO BACK FOR: Westchester Migratory Bird Center, Indiana Dunes Learning Center (which has cool summer camps), Summer European Market.

Tip: Atlas Obscura is a fun way to find out interesting places to visit. For example, Indiana Dunes was once the site of a city larger than Chicago. The Dunes Swallowed this city. Check out more about the Ghost Town at Atlas Obscura here.

Know of an interesting place, statue, or restaurant which you’d like to see featured in this column someday? Send Shari Benyousky an email at [email protected] 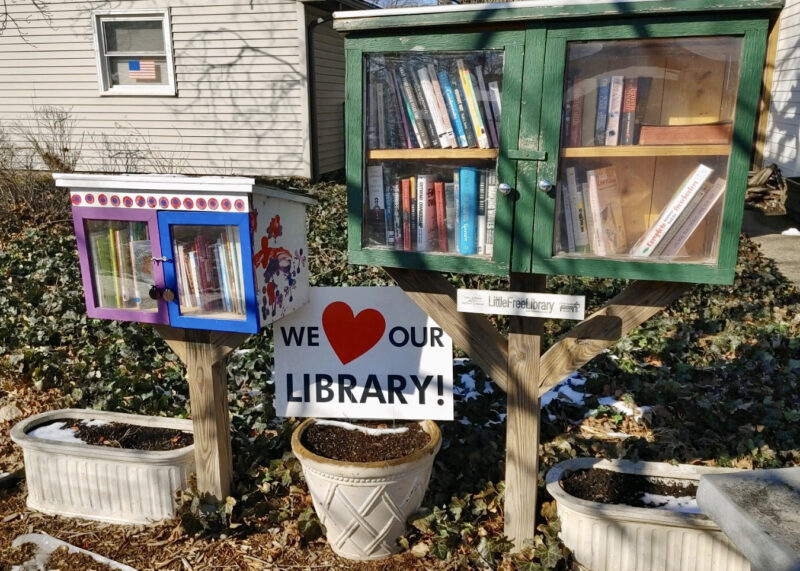 Chesterton is home to a few free little libraries. 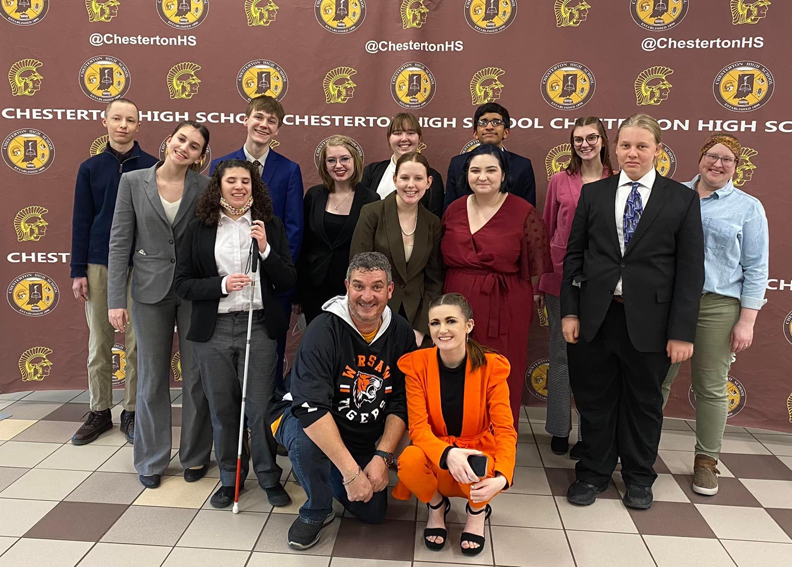 Warsaw Community High School Speech team competition was the reason for the visit to Chesterton.