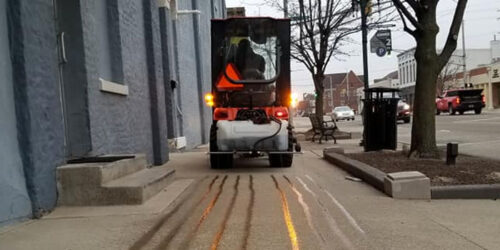 While the use of brine has been a regular part of the Warsaw street department’s winter weather strategy, the city of Warsaw expanded its use to sidewalks a few years ago.

The city pre-treats surfaces with salt brine to reduce icing. Brine has a freezing point lower than pure water and reduces the adhesion of snow and ice to surfaces.

The city uses so much of it that it purchased a machine to produce the brine.

Public Works Superintendent Dustin Dillon said they began using brine on sidewalks a few years ago and now use it regularly on main pedestrian paths. In addition to the downtown business district, it’s also applied along the trail on East Market Street, CR 300N, Harrison School and Ranch Road.

He said the city uses at least 11,000 gallons for each snow event that does not begin with rain.

Snow is expected to begin Thursday afternoon with a 100% chance of snow at night. About 2-4 inches of snow is expected, according to the National Weather Service.