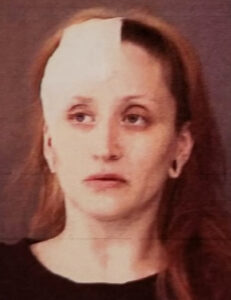 WARSAW — A Warsaw woman was recently arrested after allegedly stealing a vehicle and wrecking it.

On Feb. 20, Kosciusko County dispatch received a report from a man who said his vehicle was stolen from his home in Warsaw. The man said he got into another vehicle and attempted to follow his stolen vehicle. He told dispatch he lost sight of the vehicle near CR 700N and CR 300E since the suspect was driving at a high rate of speed.

When Kosciusko County Sheriff’s Office deputies arrived in the area, dispatch received a report from a person on EMS T33B Lane about a vehicle accident. The reporting person said a woman who was bleeding from the head. As deputies traveled to EMS T33B Lane, they found an unoccupied vehicle that appeared to have hit a tree. The vehicle’s registration matched the registration of the man’s stolen vehicle.

According to court documents, deputies arrived and spoke with the driver, who was identified as Hurley. Officers noticed the smell of alcohol coming from Hurley. When asked what happened, Hurley said she was involved in an accident and didn’t mean to do it.

Hurley admitted that she stole a vehicle in an attempt to get to Goshen and wrecked the vehicle. She also admitted to consuming alcohol.

Hurley was taken to a local hospital for treatment due to injuries sustained in the accident.

Deputies then spoke with the man whose vehicle was stolen. The man said he had started his car to let it warm up when he saw a woman enter the vehicle. When the man left his home and approached the driver’s side, the woman placed his vehicle into drive and left the scene.

Hurley is a habitual traffic violator as of January 2017. She has prior convictions for conversion and operating while intoxicated – prior.

For this case, Hurley was booked in the Kosciusko County Jail on Feb. 20, with a $5,750 surety and cash bond.