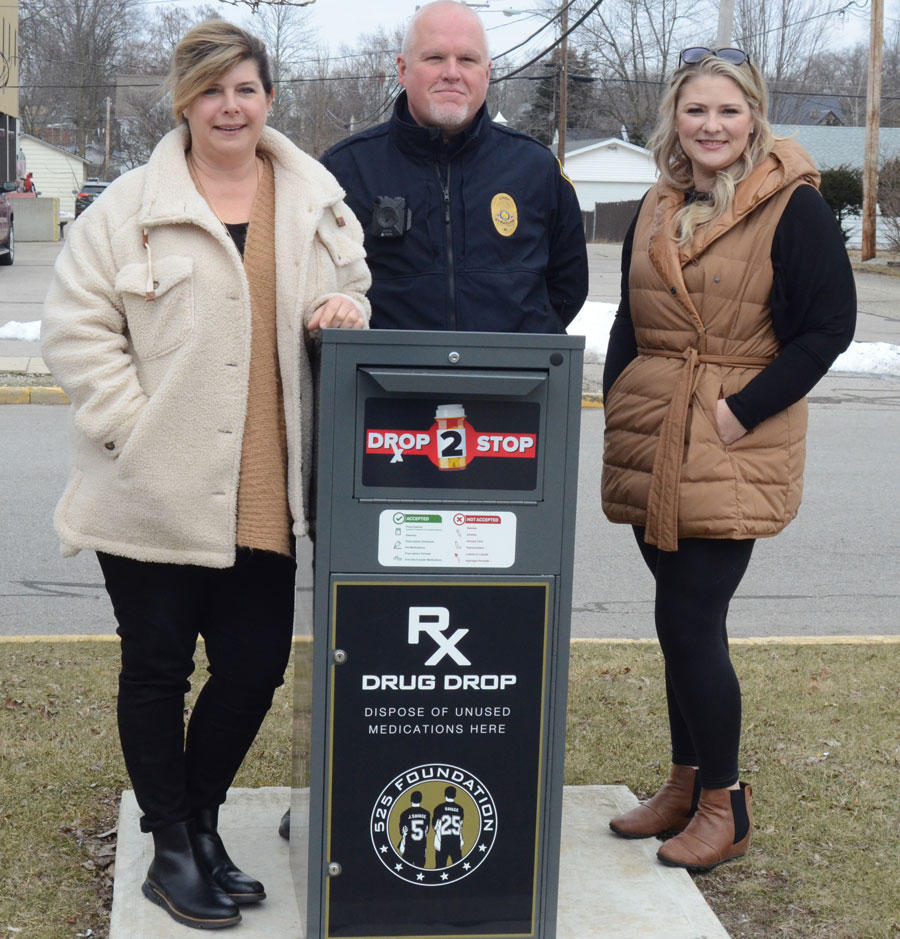 SYRACUSE — Syracuse Police Department is the newest location for the 525 Foundation Drop 2 Stop drop boxes. Kosciusko County Sheriff’s Department and Martin’s Supermarket also have the Drop 2 boxes available. Claypool and Warsaw police departments will also be getting the new boxes.

While the police department has had a drug drop box for the past nine years, age, deterioration and safety prompted a replacement. “It’s at the same place and location,” said Jim Layne, Syracuse Police chief. “Anyone with expired or a change in medication can dispose of their medication in a safe and secure way to keep it out of the reach of their children or grandchildren,” said Becky Savage, co-founder and president of the 525 Foundation.

Last year, Syracuse Police collected 460 pounds of medication. “It’s available 24/7,” said Layne who, along with Savage stated the boxes are more secure, have a double lock on the bin area and an arm barrier inside when dropping off medication. “It has newer technology and a better grade of steel,” Savage added.

In August 2018, Drop 2 Stop boxes were introduced by the 525 Foundation in Northern Indiana. The boxes feature specially designed, secured boxes that allow people to properly dispose of expired or no longer needed drugs any time. According to Savage, there are 10 other locations throughout northern Indiana.

The purpose behind the boxes is to stop misuse and abuse of prescription drugs in the communities. When someone drops off unused or expired medication it stops senseless deaths. “It encourages communities to safely dispose of medication so it does not fall into the wrong hands,” said Savage. “I love partnering with different communities to collaborate safe disposal.

“Every sheriff’s department and police department is able to participate in the take back of expired medication where anyone can walk up and drop off medication. We’re offering a more convenient, no question asked opportunity. They can drive up and drop off. It’s safe,” said Savage.

The 525 Foundation’s mission is preventing loss through education of teens and families and raise awareness about the dangers of alcohol and prescription drug misuse and abuse. The foundation works with the state and through donations and grants to provide these drop boxes.

There is a story behind the organization, its name and the numeral 2 on the boxes. Savage’s two sons, Nick, who was 19, and Jack, who was just 18 June 14, 2015, attended high school graduation parties. It was also the day these two brothers died. Five others suffered overdoses. The reason: acute alcohol and oxycodone overdose. “They chose to drink and they chose to take a pill when it was offered to them. These choices were mistakes and my boys paid the ultimate price for them. Our family was changed forever,” Savage stated on the foundation’s website: 525foundation.org.

Both boys graduated with honors and were captain of their high school hockey team their senior years. Nick, who led his team to state runner-up in 2015, had just completed a year of college and was home to spend the summer with the family. Jack led his team to earning the state champion title in 2015 and was preparing for his first semester.

As a result the family is honoring their sons with the creation of the 525 Foundation – their hockey numbers were 5 and 25. “Our goal is to prevent another family from having to endure the pain of such a tragedy through outreach, education and support.” The numeral 2 on the boxes represents the two boys.

In addition to various programs, such as Wise-Up which provides one sheet educational materials on vaping, alcohol, opioids and fentanyl, prescription safety, marijuana, prevention and stigma and benzos, there are other education and outreach programs for schools and the community. A book, “#ONECHOICE,” available through Amazon and on the website, is the story of the two brothers.

A prevention conference for law enforcement, medical professionals, educators and the community is planed for June 20-22 where attendees can learn more about prevention.

The family appeared on the “Megyn Kelly Today Show” and caught the eye of famed football quarterback Terry Bradshaw, whose family had a similar situation and who has partnered with the foundation and assists in a major fundraiser once a year. Other funding is through donations, partnerships and grants.