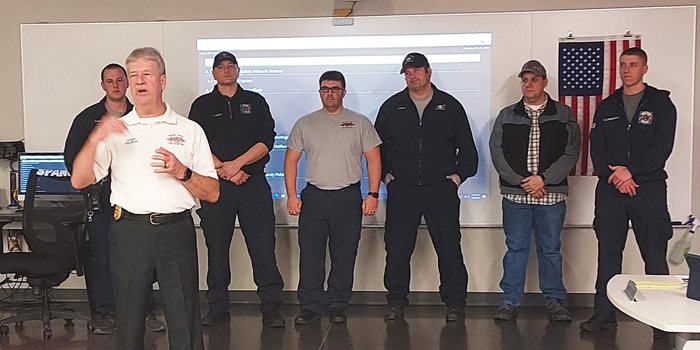 Dr. David Robertson, assistant superintendent for elementary education, said WCS is thankful for Wilson’s commitment to the schools for years, as well as his achievements over the years. One of those achievements is the public education committee.

“You can’t do, we can’t do what we’ve done for our children without the guys,” Wilson said.

He brought up WWFT Public Information Officer Max Kinsey and firefighters Lucas Ellsworth, Tyler Colt, Trent Stamper, Jason Neher and Justin Miller in front of the Warsaw School Board Monday to be recognized, as well.

In the ’90s, the fire department did some training at the schools, which was expanded to bring fire trucks in so kindergarteners could see the trucks, Wilson said.

Then fire education programs were assigned to the committee.

“If you haven’t seen to one of these guy’s programs, you’re missing it,” Wilson said.

Kinsey said the committee does things like stations for kindergarteners. Kindergarteners can’t sit for 45 minutes to an hour and listen to them talk, so firefighters each have a specific station.

“And so we just hit them for 3 minutes real hard with a ton of information and we rotate. And just we rotate through all the stations,” Kinsey said.

The committee does that for all the schools at WCS.

Kinsey said they are setting up to do their Learn Not To Burn program.

“And we are here all day long. We start with kindergarten and go all the way up. And everything is based on their age. So kindergarten is stay away from hot stuff. We do magic tricks with them and we do all sort of stuff like that with them,” he said.

First grade has a program called Rabbit Ready, where they learn to get out of a space quickly. For third grade, WWFT brings a trailer and fills it full of smoke and teaches students how to get out of their house safely and what to do in certain circumstances.

The kids are receptive to what the committee is doing, Kinsey said.

Wilson said if the firefighters didn’t spend the time in the classroom working with students, he knows there would be fatalities in fires.

“It’s working. You allowing these guys to be to in your school system is working,” Wilson said.

In other business, Hoffert said there was a big update about COVID-19 restrictions in schools that came from the Indiana Department of Health this past week.

In September, the Board approved Hoffert’s recommendation the schools mandate masks until the county went into the yellow distinction.

In November, the Board approved Hoffert’s recommendation to go mask optional for the second semester, unless the county went into yellow earlier. Hoffert said WCS decided to go that route because all students had the opportunity to get vaccinated.

IDOH attributed the most recent changes to declining cases of COVID-19 across the state and the fact that all school-aged students are now eligible to receive the vaccine.

One of the biggest changes is schools are no longer required to close contact quarantine students who have been exposed to students or staff that have tested positive. Students or staff who test positive should isolate for five days and can return on the sixth day if they haven’t had a fever for at least 24 hours.

Hoffert said schools are no longer required to do contact tracing or report positive cases to IDOH.

Hoffert said they have seen a sharp decline in positive cases in the past couple of weeks.

Information will be posted to the school corporation’s website today, as well as be sent to the building principals.