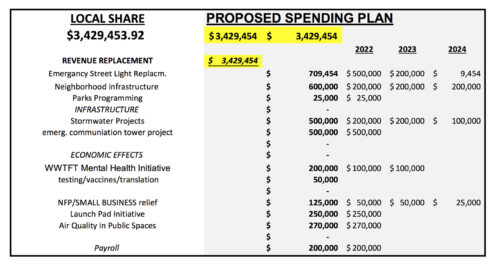 A breakdown of initiatives using American Rescue Plan money was provided by the city of Warsaw.

WARSAW – A plan outlining how the city of Warsaw will spend its $3.4 million in American Rescue Plan Act money over the next couple of years was one of two resolutions the Warsaw Common Council unanimously approved Monday night, Feb. 7.

The other resolution opposed state legislation regarding the elimination of the business personal property (BPP) tax without some source of revenue replacement for taxing units, as the Council and Mayor Joe Thallemer discussed at their previous meeting.

On the ARPA resolution, Thallemer said the distribution to the city was $3,429,453. The city received half of it in 2021 and will receive the other half this year. During budget hearings in 2021 for 2022, he said the Council approved a budget for the money, “to allocate those funds and put them in play for the year.”

Thallemer said the resolution, with a funding plan of those dollars, was a further requirement by the U.S. Department of Treasury. He, along with Council President Jack Wilhite and Councilwomen Cindy Dobbins and Diane Quance, sat down and went through the plan and the budget was for just what the city received and no more.

The biggest chunk of the money – about $2.2 million – is being set aside for potential use this year.

Thallemer said none of the figures are exact. “And we will ask that any of these projects that have budgets in full amounts and requests come back to this Council so that these dollar amounts are buckets for these certain projects, but at this point, we don’t have any specific requests,” he said.

“Other than what this spending plan does, is, it sets forth to the public our first pass at how we’re going to spend it. If a project comes in under budget if a project gets funded in an alternate method, and the funds aren’t required for that specific project, they can be – as long as they’re in the category in the budget that they apply to – they can be spent for other projects. But I will ask that any project come to this Council so you know where that money is coming from and how much it’s going to be.”

Concerning the $270,000 for air quality in public spaces, Thallemer explained, “We’re having some issues here in City Hall with some things that weren’t installed properly, let’s put it that way. And it’s not impacting air quality when it works, but when it doesn’t work, that’s a problem. We’ve spent some money to replace it and we’ve got to look at a permanent fix to this.”

He said the City Hall has had the problem for six to seven years and it needs fixed.

Wilhite asked that the Council be updated regularly on how much of the ARPA funding is left as the money is spent. Clerk-Treasurer Lynne Christiansen said she will have a spreadsheet with that information.

Quance made a motion to pass the resolution, and Dobbins seconded it. It passed 7-0.

The other resolution brought before the Council was 2022-02-01, which opposes legislation regarding the BPP tax.

Thallemer said, “Right now, there’s a House Bill that is still alive on the floor, so this is a very active piece of legislation as the second half of the session occurs. We’ve been asked by AIM (Accelerate Indiana Municipalities) to consider and pass resolutions to just make sure that our community is aware of the potential negative impact of this legislation.”

Reading parts of the resolution, he said, “Whereas the Indiana legislature proposed changes to the depreciation floor and other aspects of Indiana’s business personal property tax as a priority in their 2022 legislative agenda; and whereas the Warsaw Common Council opposes all legislation that contemplates eliminating any portion of the personal property tax without permanent full replacement guaranteed by the state.”

Thallemer said that was “key” to what they are asking.

The resolution states that “any contemplated revenue replacement must be a source of revenue that continues to grow over time just as a property tax based would in order to allow growing communities to meet the demand for services.”

The resolution says that for taxing units not at the property tax caps, a reduction in the tax base could result in property owners paying more in residential property taxes. And for those communities at the caps, any phase out of BPP tax means a loss in revenue for local units of government.

Thallemer said he had Baker Tilly do an analysis of where the city would stand locally. Over time, he said, “The residential (property owners) that pay property tax, their taxes would go up until they hit the cap. And then when they hit the cap, then the city starts eating all that revenue loss.”

The resolution points out that the BPP tax distributions to local units of government exceed $1 billion, including $321 million to the city of Warsaw, which represents about 29% of the city’s property tax revenue. The city of Warsaw would lose an estimated $1.6 million in tax revenues because of the circuit breaker tax caps.

Warsaw Community Economic and Development Director Jeremy Skinner said the city would be losing a lot of revenue and would have some bond issues.

“I don’t feel like we would be overly threatened by it, but our ability to do projects in the future would be severly hampered,” he said. “I don’t see it as an economic development tool that they think it is because for most of your industry, it’s really going to just be passed off onto real property, rather than personal property. So they’re not getting the tax savings that they think they are and the biggest impact is to residential. That’s where it’s going to hurt the most.”

Wilhite made the motion to approve the resolution, and Councilman Jerry Frush seconded it. It passed 7-0.