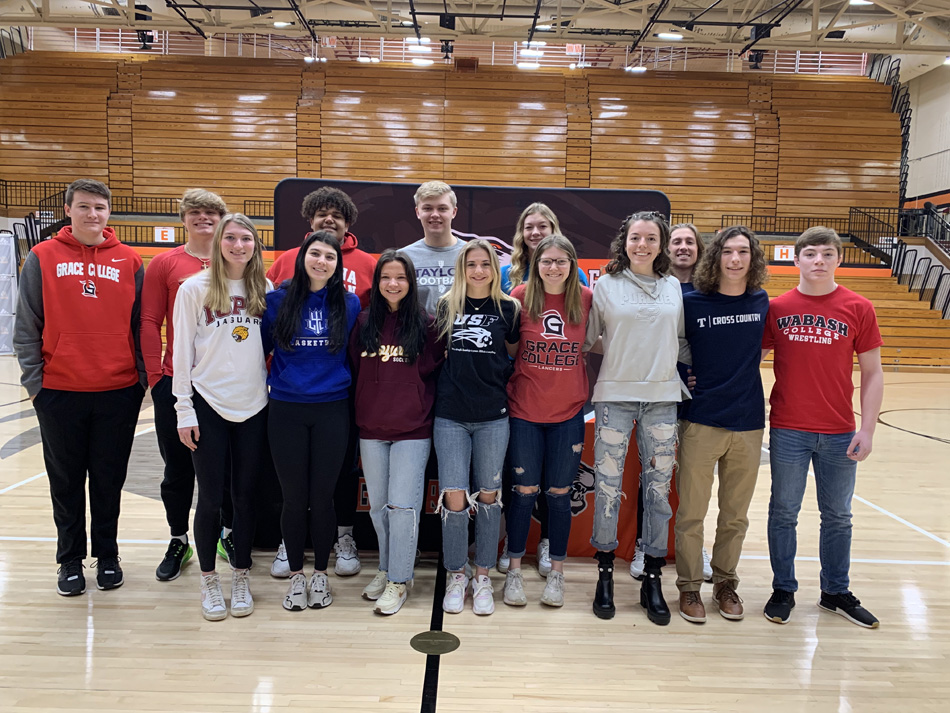 WARSAW – Warsaw Community High School celebrated its latest batch of student athletes heading to the next level to compete with a college signing event Jan. 31 in the Tiger Den at WCHS. More than a dozen athletes announced their college intentions and their sport of choice, adding to a very long list of Tiger athletes who have committed to compete at the college level.

WCHS athletic director Matt Binkerd was emcee for the event, and noted the combined cumulative GPA of the 14 athletes at the signing was a 3.9.

Here are bios of the athletes on hand as well as their own words explaining their final decisions on picking a college destination.

Wini Barnett, IUPUI, Track And Cross Country
Clubs: Octagon Club, National Honor Society
Honors: 3x XC state qualifier, track state runner-up 4×800 relay (2021), school record holder track 4×800 relay, All-NLC (XC and track), Academic All-State
GPA/major: 4.40, biology and neuroscience
Her words: “It’s going to be a change for sure. It will be something I will have to adjust to. I think in the long run, it’s going to be fun. I will enjoy getting challenged more, getting pushed, and having competition to run with that will make me better.”

Aiden Binkerd, Indiana Wesleyan, Football
Clubs: NG3
Honors: All-NLC, Academic All-State, Captains Award, WHME TV-46 Student Athlete of the Week
GPA/major: 4.01, business
His words: “I think the film spoke for itself, but I think they saw leadership on the field, especially being a captain. I am hard working. My skill and talent can be utilized, I’m ready to go.”

Isaiah Courtois, Indiana Wesleyan, Football
Clubs: National Honor Society, Source of Strength
Honors: Academic All-State, Champion of Character (BB), WHME TV-46 Student Athlete of the Week
GPA/major: 4.15, business administration
His words: “I think that I’m big enough to play either guard or tackle. Being in a triple option offense makes me more capable of playing either position. I can play multiple positions and I have speed and strength I think that translates to the next level.”

Kyle Dawson, Taylor, Football
Clubs: Baker Youth Club volunteer, Winona Lake Grace Brethren volunteer/teacher
Honors: All-NLC
GPA/major: 3.37, business
His words: “The coaching staff and campus there at Taylor, I liked it being located somewhat close to home but just enough away. The coaching staff there are a group that will push me both in football, but also spiritually. It’s a great opportunity to be able to go there and play football.”

Marin Hart, Purdue Fort Wayne, Track
Clubs: KC Chamber, Mission Point Church volunteer, Leesburg Elementary basketball coach
Honors: All-NLC, sectional and regional champion high jump, sectional champion hurdles, 2x state finalist
GPA/major: 4.27, marketing and management
Her words: “They have their own dorms, which are actually apartments, which have kitchens and a door to my own room so I don’t have to share it with anyone. They also have a really nice indoor facility. The coaches are very nice and knowledgeable, and the program is young. I have a chance to get some records there.”

Sam Justice, Grace, Baseball
Clubs: N/A
Honors: All-NLC
GPA/major: 3.62, pre-medicine
His words: “I fell in love with the campus and the atmosphere. The facilities are all great and it is a nice place to go. They play good, hard baseball.”

Corissa Koontz, Loyola, Soccer
Clubs: KYLA, Octagon Club, National Honor Society, Tiger Leadership Council
Honors: 4x All-NLC, 2x All-District, Second Team All-State, Academic All-State, WCHS season assists record holder
GPA/major: 4.17, business
Her words: “Being in Chicago, it opens up the world. It’s a port for everything. I just knew it would be a great match. I want to go to law school and so there’s great opportunities for internships. I want to go the sport route, maybe be an agent or something like that.”

Kiersten Parker, Saint Francis, Soccer
Clubs: Octagon Club, National Honor Society, President of HOSA
Honors: 3x All-NLC, soccer team captain, Top Team Player award, 4x Academic All-State
GPA/major: 4.03, nursing
Her words: “I went to an ID Camp before their new coach (Ken Nuber), I really liked the campus and has a PA school on campus, which is a huge benefit. After meeting Ken, he was super outgoing and super welcoming, and I just felt wanted in this program. I like their style of play, more athletic and faster.”

Andrew Ross, Wabash, Wrestling
Clubs: N/A
Honors: 2x semi-state qualifier, 4x Warsaw Invite champ, wrestling team captain, 93 career wins (through Jan. 31)
GPA/major: 4.1, accounting
His words: “From what I’ve seen, most wrestlers aren’t multi-time state champs or anything, but they consistently turn out great wrestlers. They are nationally ranked every year. I think I have a great opportunity to get better there and become a better wrestler overall.”

Abby Sanner, Trine, Basketball
Clubs: National Honor Society, Tiger Leadership Council, NG3
Honors: IBCA All-State HM (BB), All-NLC (BB/VB), IFN All-Area and T-U Player of the Year (BB), Coaches Award (BB), Lady Tiger All-Tourney Team, Academic All-State (VB/Track),
GPA/major: 4.47, accounting and actuarial science
Her words: “I knew I wanted a college that had actuarial science as a major, not many colleges have that. I found that Trine had that and a good basketball program. It’s a place I can excel in and it should treat me well. I debated doing track as well as basketball at Trine, but basketball is my first love and what I’ve always done with travel basketball. It’s just my first love and I knew that’s where I wanted to continue.”

Avery Sleeth, Grace, Softball
Clubs: National Honor Society
Honors: All-NLC, Defensive MVP
GPA/major: 4.16, nursing
Her words: “Stepping in and being put into a leadership spot as a freshman made me grow up on the softball diamond pretty quickly. I’ve just commanded that catcher’s position ever since. I attended a practice (with Bo and Sam Coolen at Grace) and worked with some of the catchers with drills and how they commanded their positions and learned what the opportunity is like to play at Grace, no matter where I might be positioned.”

Sam Slough, Trine, Track And Cross Country
Clubs: N/A
Honors: State qualifier (2020)
GPA/major: 4.13, design engineering technology
His words: “I thought as I ran more, I became more comfortable because I’ve been doing this for so long now. I’m excited to know that Trine doesn’t have to worry about me. I’m just out there having fun with it. The more I have fun, the more I work.”

Trace Stookey, Trine, Track
Clubs: National Honor Society, Tiger Leadership Council
Honors: IATCCC Academic All-State, IFCA Academic All-State, 2021 regional qualifier (track), 2021 Max Truex shot put champion, football team captain
GPA/major: 4.01, civil engineering
His words: “My first thing is engineering, my second is throwing. Trying to find a school that had both, that was pretty tough. Valpo has a good engineering program, but I’m not a D-1 thrower. Wabash wanted me to throw, but they don’t have engineering. Purdue, I’m not D-1. I found Trine and instantly fell in love with it. It felt like home.”

Bailie Stephens, Lawrence Tech, Basketball
Clubs: National Honor Society, Warsaw Voice Group
Honors: All-NLC, IFN All-Area
GPA/major: 3.94, nursing
Her words: “I went through my travel program and got a scholarship, then went to their basketball camp. They loved me and offered me a spot right after the camp. It was a release from my shoulders. I felt secure there.”

Not On Hand
Warsaw had a handful of its committed athletes not on hand for the event.
Kacilyn Krebs declared earlier in the fall to play basketball at the University of Indianapolis. Samantha Aalbue has chosen Montreat College to play soccer. Noah Chew has chosen Trine University to play football and track. Gracie Willig has chosen Albion College to swim.