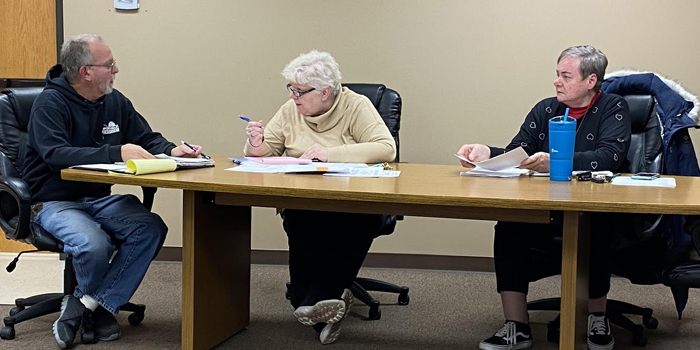 MENTONE — Mentone has started the process of looking for a new deputy marshal.

At its meeting on Wednesday, Jan. 5, the Mentone Town Council approved allowing Town Marshal Jim Eads to start the application process and set salary parameters for the position.

The council agreed to set a range for the starting annual salary from $41,000-$46,330, with the exact amount depending on the applicant’s experience.

The council also heard about a sewer issue from resident Brandon Whitton who lives at 509 N. Tucker St.

“I get a lot of flooding out there, it just happens, no big deal, but every time we get a storm, my septic tank backs up into my house, every storm every spring during the melt,” he said. “I’ve been dealing with it, it’s no problem because then I call you guys and they have to come out and look at it.”

“I think I’ve had my septic tank pumped probably five times in the past couple of years, which has been fine, but one of the issues what brought me up here is lately probably three times now when I get those floods that pushes everything out of the septic up into the house. When it goes back out after the storm, I get plugged,” he continued. “Problem is it’s on my side of the pipes, so I’ve had to pay a bunch of times to have that cleaned out and snaked out and so I’m just kind of seeing if there’s anything we can do about that.”

“So does the water stand above your tank? Is it underwater when it floods?” asked Town Council Member Tim Croy.

“The tank itself is not underwater. It’s been close to it,” said Whitton. “It’s had some standing water near it, but my whole lot right behind the tank gets filled up with water. There is a storm drain I think it’s called back there, it’s just one of those grates where you can see real deep down in it. That never seems to be super full, but yeah, that whole yard gets filled up back there.”

Croy asked Whitton if he could contact the town as the problem was happening if it’s during town employees’ normal work hours, so employees would know what they’re dealing with, which Whitton agreed to.

The council also heard from Croy that he had met recently with Apex Waste President Rich Heemstra. Apex Waste is the town’s trash pickup provider.

Croy put out a reminder that Apex starts to collect trash at 6 a.m., noting that some residents have been putting out trash too late for it to be picked up.

He also put out that Heemstra asks that people use the special red canisters that he’s been doling out for trash pickup.

“He’s going to continue that until he either gets everybody a can or they run out,” he said of the handing out of containers.

People should use the special containers if they’ve received one for trash as Heemstra is to use a truck for pickup that’s equipped to pick them up.

“So a lot of these that people have out there that have the wheels, his mechanical arm will just crush those,” he warned.

Croy also advised that people should contact Apex if they believe they will have more trash than will fit in one special red canister.