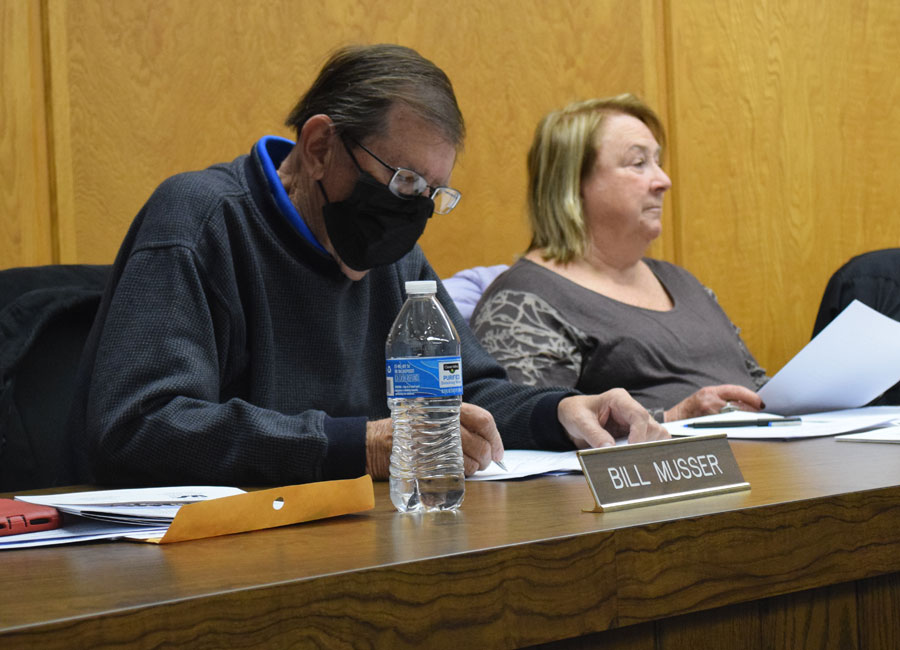 Councilman Bill Musser reviews paperwork while he listens to a presentation during a recent Syracuse Town Council meeting. Behind Musser is Councilwoman Cindy Kaiser. Musser will be council president for 2022.

SYRACUSE — Councilman Bill Musser will be taking over as council president in 2022 for the Syracuse Town Council. After serving on the council for 12 years, he said 2021 was the busiest the council has been when it comes to projects.

“We are a growing community and I think that’s good,” he said, explaining when he came on the council, he wanted to see the community grow.

Musser said he sees the completion of the new athletic complex on Kern Road to be the biggest challenge this year. He explained having to get a bond to finance the ball park along with supply issues slowed things down a bit, although he expects the pace to pick up considerably in the near future. He noted buildings have started to be constructed on the site.

Another big project the council will need to stay on top of is the development of Oakwood Realty to bring more housing to the area. Musser said he’s seen the proposed layout, but hasn’t seen any engineering plans yet. The town’s main role in the project will be providing infrastructure. “It’s going to be interesting with Oakwood,” he said.

He’s also excited about the renovation of the old Syracuse Elementary School into apartments which will also help with the need for housing in town.

Another project nearing completion is the new manufacturing facility in the Polywood complex. That project is expected to bring an estimated 200-400 jobs to the community which means dealing with an increase in traffic and road maintenance.

“We have a lot of new businesses starting up in Syracuse and we want people to shop locally,” Musser said.

One project Musser wants the council to take the lead on is in cleaning up the town by starting to enforce the city codes. “We want people to take pride in their community,” he said. “We don’t have couches and other stuff (on the side of the road) like other places, but we have enough of a distraction.”

At a recent town council meeting, Renea Salyer, executive director of the Syracuse-Wawasee Chamber of Commerce, proposed developing a dog park on a vacant piece of land the town owns on Dolan Street.

Musser said he thinks a dog park in that are is a novel idea and if the chamber can maintain it and operate it as the idea was proposed, it would be a nice addition to the community. Saying he is in favor of the dog park in the proposed location, Musser said, “With the plans the chamber has, it should be nice.”

Musser noted hiring David Wilkinson as town manager and Mark Aurich as public works superintendent were good decisions as both men are experienced. He went on to credit fellow councilman Larry Siegel for his hard work on both the Syracuse Redevelopment Commission and the town for the Syracuse Tech Park being full.

He also credited Salyer saying she was a pleasant addition to the town, “a real go getter with lots of plans.”

Musser expects 2022 to be a good year for the Town of Syracuse.