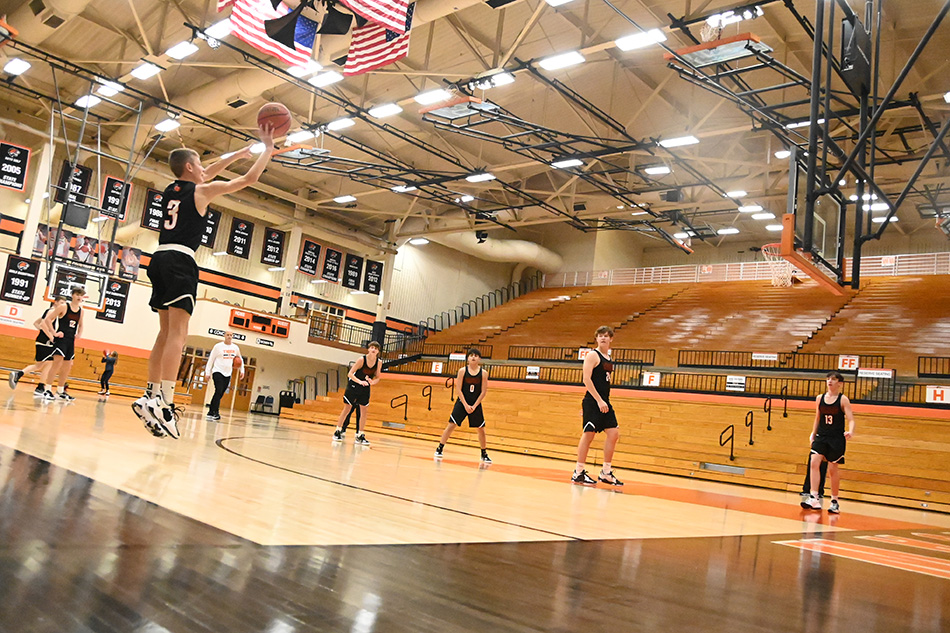 The Tiger Den at Warsaw was mostly quiet during a recent walk through practice, but will be very busy during the holiday break with a pair of basketball showcases scheduled to end the calendar year. Photo by Mike Deak.

WARSAW – Once all of the wrapping paper has finished flying and the holiday ham leftovers are gone, sports fans from around the area can get back to consuming their favorite local teams.

A host of area schools will be hosting some kind of holiday tournament, or in some cases, traveling to one. Let’s unwrap where some of the Kosciusko County area teams will be competing during the holiday break.

Tuesday, Dec. 28.
Warsaw and Lakeland Christian will each host two-day boys basketball invites. The Tigers will host teams from Pendleton Heights (11 a.m.) and South Bend Washington (8 p.m.) the 28th, then take on Fort Wayne Bishop Dwenger (8 p.m.) the 29th in a revolving four-team carousel. LCA will conduct its annual LCA Classic boys and girls hoops tournaments. The games will be split, the boys playing exclusively at Grace College both the 28th and 29th and the girls at LCA the 28th and Grace the 29th. LCA’s boys will see action against North Judson and Clinton Christian in the opening round, the Lady Cougars matched with Clinton Christian and Purdue Polytechnic.

Placement games will all take place the 29th at the Manahan Orthopaedic Capital Center.

Wednesday, Dec. 29
One of the biggest, if not the brightest, wrestling tournaments in the Hoosier State begins the 29th in the Al Smith Classic hosted by Mishawaka High School. An annual who’s who of the state prep wrestling world will have local entries from Wawasee, Warsaw and NorthWood all involved among more than two dozen programs. The individual tournament begins Wednesday morning, with final rounds set for Thursday under the solitary light of The Cave.

Wawasee will be the site of the one-day Wawasee Holiday Tourney. The Warriors drew Garrett in the first round (10 a.m.), opposite Rochester and Woodlan. Consolation round comes back at 6 p.m., with the winners of the two morning games coming back for a 7:30 p.m. final. There will also be JV games at Wawasee opposite the varsity, with Wawasee and Garrett also playing at 11:30 a.m. among the action.

The Banker’s Classic girls basketball tournament hosted by Northridge will include NorthWood, a tournament NorthWood is just two years removed as the champion. The two-day tourney will guarantee teams at least three games during two days, played at Northridge Middle School.

The Elkhart Gymnastics Invite is also set for that Wednesday, which features a handful of gymnastics teams looking to kick their seasons off right. Wawasee will be among the teams, hosted by the perennial state power Lions of Elkhart.

Bonus Stuffing
If the hustle and bustle of the holidays isn’t your speed, there are single game opportunities as well. Columbia City will host boys basketball games against NorthWood the 28th and Tippecanoe Valley the 30th, Warsaw’s swim program will travel to LaPorte the 28th for a double dual, and Grace College’s nationally ranked men’s basketball team will host Cornerstone University Dec. 30 at the MOCC.