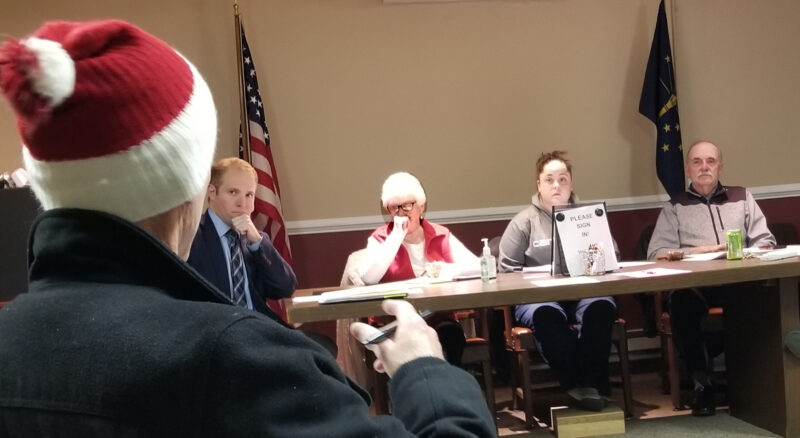 Steve Behny, with his back to the camera, addresses Silver Lake’s town leaders Wednesday, Dec. 8. Behny is opposed to plans for a store that would be located across the street from his home on West Dixie Drive. Also pictured from left are town attorney Austin Rovenstine and town council members Jean Weller, Nichole Taylor and Hugh Murfin. InkFreeNews photo by Dan Spalding.

SILVER LAKE — The effort to bring a store to Silver Lake that sells fresh produce and meat has taken another turn.

Instead of seeking to rezone property on the northwest corner of Dixie Drive West and SR 15, from residential to commercial, a church that owns that land is now seeking to have it annexed by the town.

Silver Lake Wesleyan Church owns the land and is entertaining an offer – widely believed to be from Dollar General –  to construct a store that would include groceries on the city’s north side.

Details on the issue came up quickly at Wednesday’s town council meeting.

The church had taken its request to the plan commission, which recommended against the request and had sent it to the county commissioners for consideration.

Since then, there has been a movement to support plans for the store that has been conveyed.

The company has since upgraded its plan to include a market store concept, an idea that has strong support from the church and others in the community.

As a result of what’s been called new information, the church asked that its petition before the county be pulled back to allow time for the town to consider annexing the land – which would give the town more control over the fate of the property.

Indeed, if the land is annexed, the rezoning would still go before the plan commission again, but the final say-so would rest with town council, according to Dan Richard, plan commission director.

“If they do annex it, that must mean they pretty much want it,” Richard said.

Town Attorney Austin Rovenstine explained that a voluntary annexation in which all of the property owners supported it could be a fairly simple process.

But two Dixie Drive residents, Carolyn Montel and Steve Behny, who live side-by-side and across the street from where the store would be constructed, spoke against the proposed location.

They’re not opposed the having a new store in the town, but not across from their homes, they said.

Montel said the addition of a store at that location would “ruin” the area and would result in more lights, traffic and trash.

They questioned the change in plans and pointed out that the plan commission had already opposed the rezoning.

Montel also said there are already commercial buildings available and said the land along Dixie Drive is better suited for residential development.

The town’s three council members have been divided on the issue. Jean Weller opposes the plan. Nichole Taylor has voiced support for the store, and Hugh Murfin said Wednesday that he’s still undecided.

The town has been working on the plan with a representative of AR Engineering, of Kalamazoo, Mich.

The owner of the land is the Indiana North District Wesleyan Church.

Murfin said he would seek certain stipulations from the store if the plan moves forward.

Council also renewed a contract with Kosciusko Economic Development Corp., for services in 2022 at a cost of $5,000.

Murfin also noted that the leaf collection went much better this year than last year.