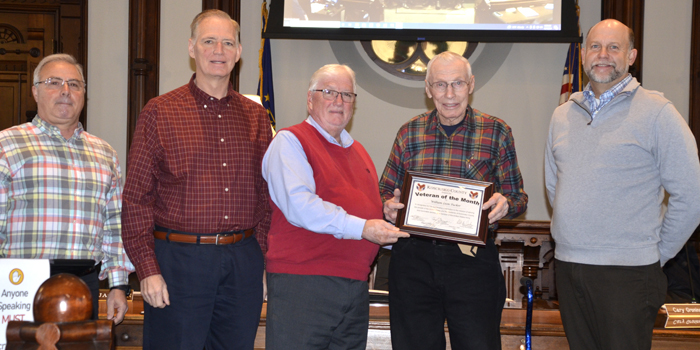 MILFORD — William Leon Tucker, 92, of Milford was honored as Veteran of the Month at the Kosciusko County Commissioners’ meeting Tuesday, Dec. 7.

He was born March 23, 1929, near Silver Lake, to William Lowell and Ruby Tucker. He was one of seven children, consisting of one brother and five sisters.

Tucker graduated from Sidney High School and Purdue University with a Bachelor’s of Science in Agriculture. While attending Purdue University, he was a member of their Reserve Officer Training Corps (ROTC). 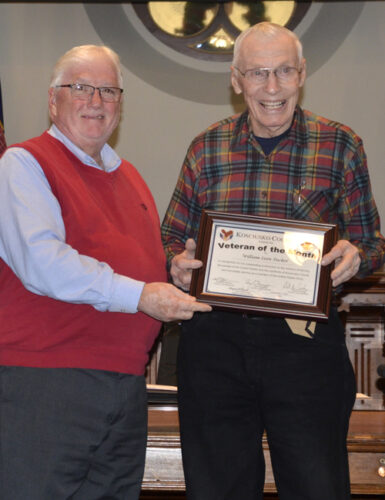 After graduation, he enlisted in the U.S. Army as an intelligence analyst. Once basic training was completed at Indian Town Gap, Penn., he was stationed at Camp Palmer, Japan, for General Intelligence and Order of Battle Training.

Following his initial military training, he was stationed with the 2nd ROK (Republic of Korea) Corps, 35 miles north of Chuncheon, Korea.

During Tucker’s time in Korea, his primary responsibility was interpretation of aerial reconnaissance, which was performed nightly by U.S. planes. His findings were sent to the U.S. Chain of Command to determine the next day’s missions for U.S. and Korean troops.

Private First-Class Tucker served in the U.S. Army for two years and was honorably discharged in October 1953. He received numerous recognitions and honors, including the Korean Service Medal with three Bronze Stars, the United Nations Service Medal and the National Defense Service Medal.

Tucker described his involvement in the Korean War as “a real experience.”

He spoke of the number of people who died “in trying to free that nation and save it from the tyranny of communism.”

“If you haven’t seen communism up close and personal, hopefully, you never will, because it’s terrible,” Tucker said.

After serving his country proudly during the Korean War era, Tucker returned to Milford to work as a farmer.

In 2010, he downsized his farming operation, although he continues to be actively involved.

Tucker has served on numerous boards during his lifetime, including being an elder and Sunday School teacher at Milford Christian Church, numerous local and state cattlemen and Limousine breed associations, cooperative elevator boards and soil and water conservation boards.

He married the love of his life, Dorothy Pinkerton, on Aug. 26, 1951, in Milford. The couple were blessed with five children: Craig, Brian, Steve and twin sisters Laura and Lydia. Sadly, Dorothy passed away in October 2020.

“This is a little overwhelming,” Tucker said when presented with a plaque in recognition of his honorable service. “I am not a hero, I’m a farmer.”