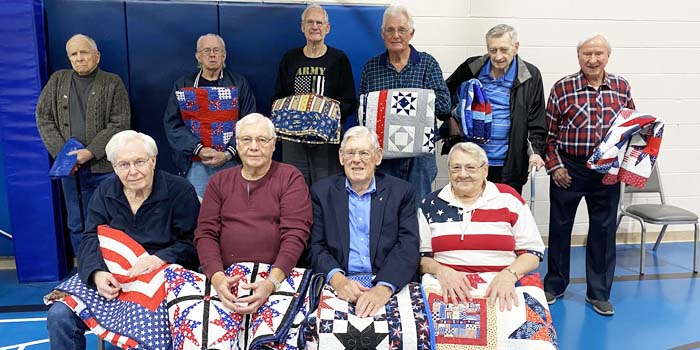 WARSAW — Ten nominated local veterans were recognized for their service to the country on Tuesday, Nov. 9.

Liberty Sewing Circle gave red, white and blue quilts to nine of the veterans as part of one of its Threads of Valor ceremonies in partnership with Kosciusko Community Senior Services. One veteran, Raymond Grubbs, received his quilt last year but was still honored Tuesday.

The event was at the Pete Thorn Center in Warsaw. The Threads of Valor events have been a staple for years, but Tuesday’s was the first held since 2019 due to COVID-19.

The veterans also received pillowcases to store their quilts in and plaques. In addition to the presentation, veterans and guests heard from several speakers.

“This time of year and these people who are being honored here, they are the best that America has to offer,” he said, referring to the upcoming Veterans Day holiday.

“It’s why you and I are seated here today, we don’t have to worry about the police coming in and arresting us,” he continued. “We have freedom. There’s nothing more valuable than … liberty, but it does not come free. It comes with a price and it comes with even now, young men and women who are in horrible places right now serving us in order that our freedoms are secure. We should never forget that.”

He spoke of how he and a friend of his, a World War II veteran, visited the WWII Memorial after it opened in Washington, D.C.

“But I got all excited, I got all caught up in the moment OK and I turned to (my friend) and I said … ‘You are a hero,'” shared Locke. “And I shouldn’t have said it, OK. I should have known better because (he) turned to me, he took both hands, put one hand on each of my shoulders and he said, ‘Young man, the heroes are the ones who never came home.'”

“And I know (my friend’s) not here, so I’m going to say it. These are heroes,” he said. “People who put the uniform on. It is not an easy life when you do it first of all, but those who have done things beyond that, they are our true heroes.”

“The true heroes, it’s true never came home, but these are heroes too and so we thank each one of you today for your service, thank you for your dedication to our country and they also came home and did what they could do to make this a better place to work as well and we want to thank them for that as well,” said Locke.

After the service, InkFreeNews spoke with Welch, who’s from the Burket/Mentone area, about what getting a quilt meant to him. He served from 1960-1966.

“It means a lot … to be honored like this as a veteran,” he said. “A lot of us were never honored. Although we did serve, I don’t think it was expected, but it is nice to be honored.”

“There are many other veterans that will probably be honored too in time. I’m glad I happened to be one … and I appreciate it.” 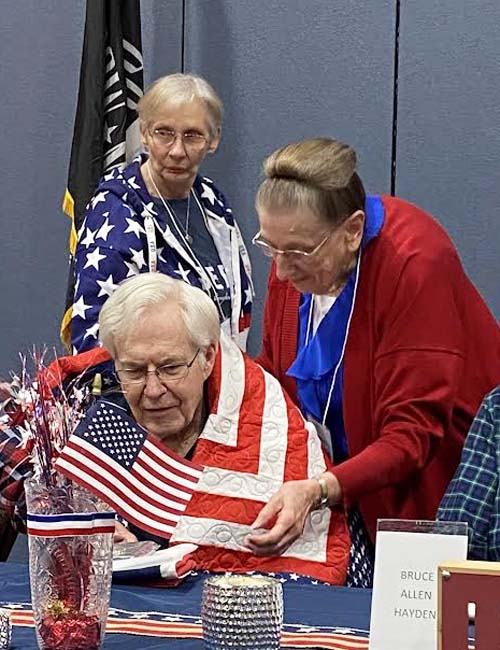 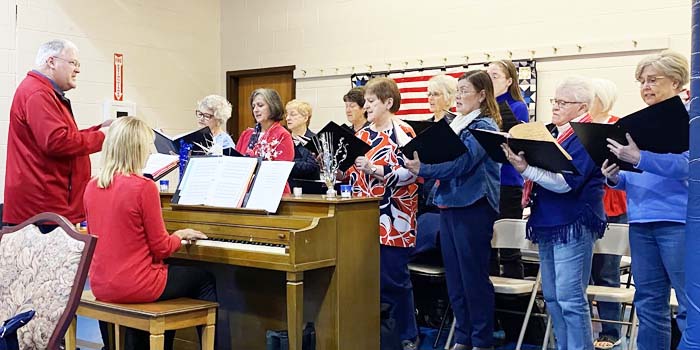 Dan Beam directs the Kosciusko County Extension Chorus during the event. The chorus performed a number of patriotic songs. 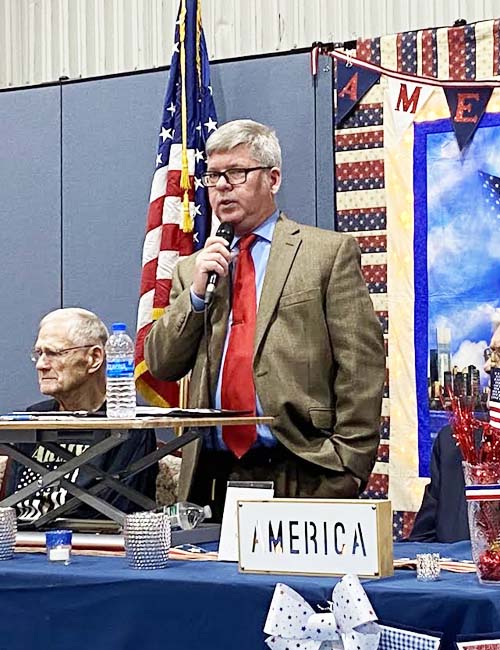 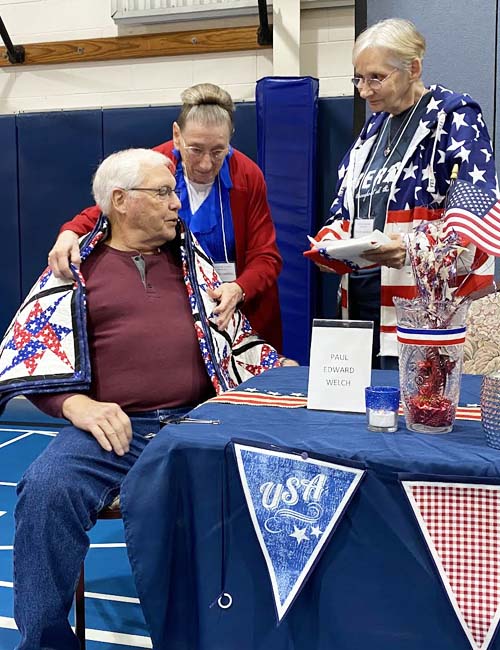 Campbell, center, gives Welch, left, his quilt as Hartman, right, stands ready to give him a plaque. 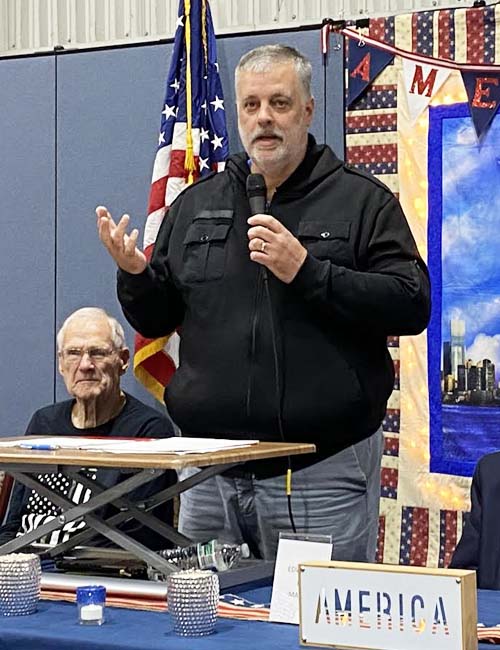 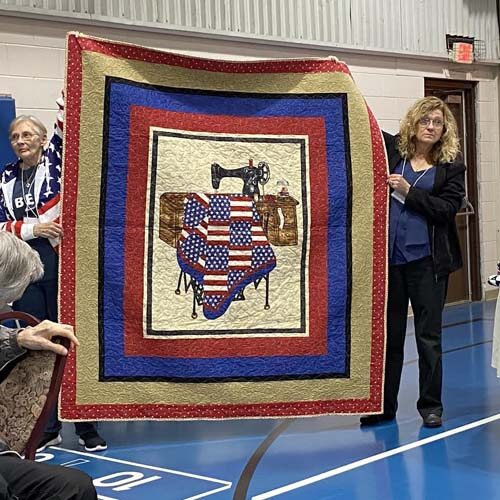 Hartman, left, and fellow Liberty Sewing Circle member Deb Swanson hold up a quilt the circle made for its member Kathy Snell. She’s headed up the group and is stepping back from that role. 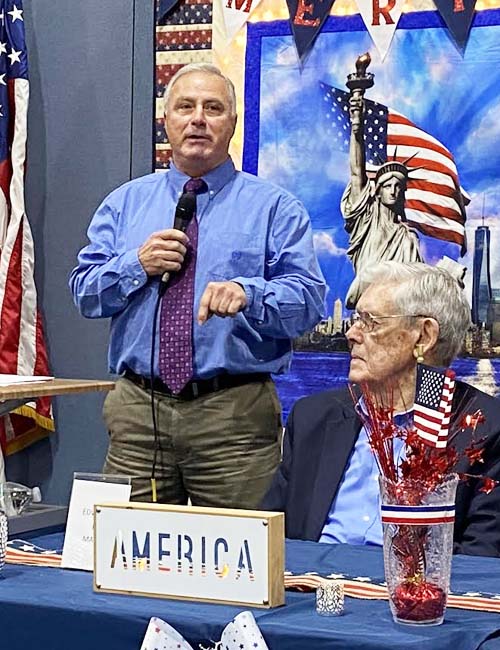