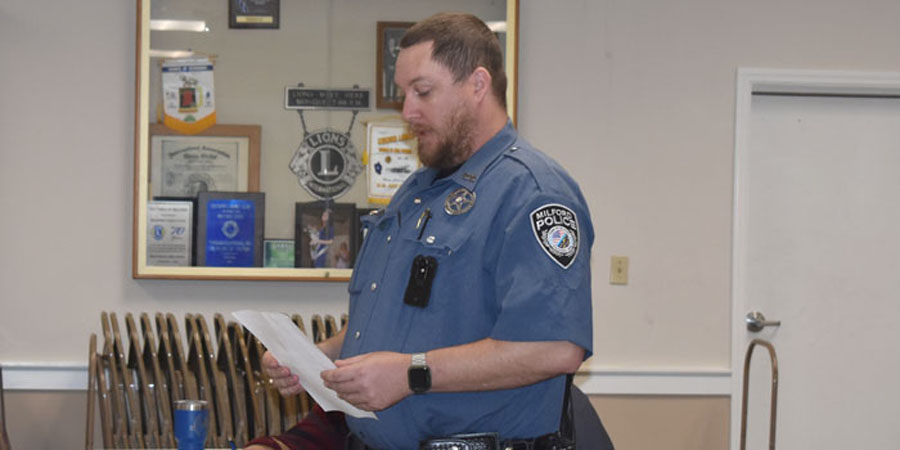 Milford Deputy Matthew Carter received permission from the Milford Town Council to organize the second Christmas parade. This year’s parade will begin at 6 p.m. Dec. 18 and will be followed by a meet and greet with Santa Claus at a location yet to be determined. InkFreeNews photo by David Hazledine.

MILFORD — Milford Town Council voiced its continued support of a bike trail connecting the town with Waubee Lake Park at a meeting held Nov. 8. The council voted to once again apply for the Indiana Department of Transportation Rural Call Trail grant, which would cover 80% of the estimated $1.7 million project.

If successful, work on the trail could begin in 2027.

In 2020, Milford hired USI Consultants Inc. to create a plan for the 1.12 mile-long trail, which was completed in 2021. The plan is for a paved trail running from First Street near The Papers Inc. to Turkey Creek, then southeast to CR 1150N and south to Waubee Lake along Camp Mack Road.

To pay for the project, the council will use a $200,000 K21 Foundation grant, along with $152,621 from the town, for a total of $352,621, which would provide Milford’s share of the 80-20 matching grant. Milford applied for the highly competitive grant in 2020, but was unsuccessful. The council should know if its application is successful in the spring 2022.

Clerk/treasurer Tricia Gall noted costs could rise or fall in the interim period. “I don’t want there to be any surprises,” she said. Gall also commented she would not bring the matter before the council if she did not know the funds would be available.

Ken Long said the money should be “earmarked” in budgets, and Gall affirmed the K21 funds can be held in the interim. “We have five years of budgets to save,” added President Doug Ruch.

Meanwhile, Milford has received $256,705.41 from INDOT for resurfacing roads and installing ADA ramps in 2022. The funds are part of round two of INDOT’s 2021 Community Crossing grant. The announcement was made by Steven Marquart, superintendent of streets, parks and utilities, at the Nov. 8 meeting of Milford Town Council. The council passed a resolution to assume authority for execution of INDOT agreements.

The grant will cover resurfacing and ADA ramps on the following streets: First Street from SR 15 to East Street, then north to Catherine; Smith and Williams streets; Fourth Street from Shafer to Main streets.

A resolution was passed authorizing Doug Ruch to sign all INDOT documents.

During utilities reports, Marquart also received permission to purchase a 2021 Chevrolet dump truck from Biggers Chevrolet in Elgin, Ill., at a cost of $54,980.60. The council chose to wait until 2022 to purchase a plow for the truck, noting other town vehicles are equipped with plows.

Marquart also issued a reminder to residents they are responsible for ensuring their meters do not freeze in the coming winter. Meters should be in a heated room or have some heat source to prevent freezing. Residents will be charged for meters requiring replacement, he said.

The council also passed a resolution authorizing application submission and local match commitment to the Indiana Office of Community and Rural Affairs. The resolution authorizes preparation of an application for funding to conduct a master utility study to examine current conditions of Milford’s utilities, including drinking water and wastewater, and commits $10,000 in matching funds.

Gall also received permission to submit a memorandum of understanding to the Indiana Housing and Community Development Authority, which is needed for the town to release information on behalf of residents applying for the authority’s utilities assistance program.

The council voted to renew Milford’s terminal data services agreement with Kosciusko County at a cost of $500.

During police reports, Chief Derek Kreider said work performed on a law enforcement vehicle exceeded the $1,500 originally quoted to repair a water pump. Eby Ford reported a leaking seal and brake problems as well, which brought the total cost to $3,108.26. A revision of the bill is currently being considered.

Kreider reported the “very successful” reserves raffle held Nov. 6 netted around $12,000 for the purchase of uniforms and equipment.

In the matter of unapproved renovations to an existing building at 203 E. Syracuse St., the council agreed to send a letter to the Kosciusko County Board of Zoning Appeals voicing no objections to the changes, which include a new roof.

The council voted to hold a Christmas parade followed by a meet and greet with Santa Claus. The parade will begin at 6 p.m. Dec. 18 and last roughly one hour. The location for Santa’s meet and greet is yet to be determined.

Following the success of the 2020 Christmas parade, Milford Deputy Matthew Carter, who organized the event, again addressed the council. “I’ve been approached by town residents who said they loved the parade,” he said, adding he has also been asked about providing an opportunity for children to meet with Santa, as COVID restrictions have eased.

The community building is the preferred location, however, its availability remained in question Monday evening.

The parade line-up will begin at 5:30 p.m. Dec. 18, west of the corner of Emeline and Main streets. Fire, street, water, EMS and police vehicles will all take part, with Santa leading the way in the turret of the police Humvee. For safety’s sake, the police will bring up the rear, said Carter.

In a change from 2020, the parade will be limited to north and south streets to meet time constraints. Carter recommended residents walk to the nearest intersection to view the parade. He added sirens would not be sounding throughout the entire parade.