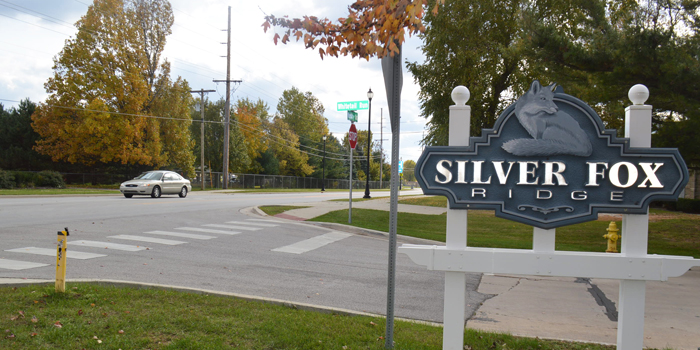 A view of the entrance to Silver Fox Ridge along Husky Trail in Warsaw. Photo by David Slone.

The issue at Harrison was that the Silver Fox Home Owners Association (HOA) wants a sign to remind its drivers coming out of the addition of the hours of the school zone reduced speed, while at Eisenhower it’s an issue of traffic backing up on CR 200S.

Councilman Jack Wilhite told the Commission that a number of months ago, Councilwoman Diane Quance was approached with a request from the Silver Fox HOA to place a school sign zone with lower speeds and times posted as drivers leave Silver Fox on Whitetail Run onto Husky Trail. This would give Silver Fox residents a reminder they’re entering a school zone with reduced speeds.

Currently, Wilhite said, signs with flashing lights and speed indicators exist at the edges of the school zone. The timing of the signs is controlled by the school so they may change as the school’s hours change. Because Silver Fox residents never see the signs as they leave their addition, that’s the reason for their request.

Wilhite said he’s met with Warsaw Police Department Capt. Joel Beam and Traffic Administrator Lance Grubbs about it. As they discussed it, they quickly came to the conclusion that a sign posted with times would not be advisable for three reasons: the size of the sign would have to be huge to accommodate all the times that would need to be listed, with all the times listed it would become a distraction to drivers and when the school changes a time for a special event or other reason the light would not coincide with the sign and make it unenforceable.

Wilhite said he brought up the idea of posting a simpler school zone sign on White Tail Run. That’s when Beam brought in Roger Sarber from the Warsaw Street Department, whose job it is to place signs for the city and keep up with regulations on signs. Sarber contacted Local Technical Assistance Program (LTAP) and a concern arose about consistency.

They did a quick estimate and came up with about 35 places that would need signs in the city, and the cost for those would be about 50% of the annual signage budget.

Wilhite said his position was that he would like to accommodate Silver Fox with a single sign. He said it was an informational sign and he didn’t believe similar signs would need to be posted across the city. He also said it wouldn’t need an ordinance or to be brought before the Common Council.

Street Superintendent Dustin Dillon said he didn’t think anyone who lived in Silver Fox was uninformed that they lived near a school zone and questioned what the gain would be of putting up a sign. Wilhite said a sign would jog the residents’ memory as they left the addition.

Beam asked if the request came from the HOA president, and Wilhite said yes. Beam assumed that the HOA had a newsletter or email that went out to all the residents, and if the normal times of the school zone reduced speed hours could be sent out to the residents that way. The addition is for seniors 55 and older.

Dillon said maybe the speed needed to be reduced in that area to 25 mph all the time so there’s no confusion. Wilhite said he’s heard a lot of people advocate that, but he wasn’t sure if they understood how that would actually affect them.

Grubbs said the 35 mph zone was set up when there was a lot less traffic. There’s a lot more businesses, housing, the YMCA and a hospital in that area now.

The Commission agreed that the HOA could send the information on the school zone out to the Silver Fox residents for now, and Wilhite and/or Beam will work with the HOA president on that. A permanent reduction of the speed from 35 to 25 mph will be reviewed for future consideration.

Moving on to the Eisenhower issue, Grubbs said if a person is driving westbound on CR 200S, turning right onto Dwight Drive at the back of the school, “it is reported that the westbound traffic is backed up while waiting for school to let out sometimes.”

Warsaw Community Schools Assistant Superintendent for Elementary Education Dr. David Robertson, who represents WCS on the Commission, said he’s had several conversations with individuals since July and it continues to be a point of concern in the area for many people.

“The reason for that shift came about from some pretty unsafe situations where both were trying to turn left in there in front of oncoming traffic when it’s backed up,” Robertson said.

He said WCS continues to see an increase in the number of students being picked up versus riding a bus for a variety of reasons. He said currently parents have to turn right onto Dwight Drive and snake through the parking lot to pick up their student, but quite a bit of backup on CR 200S continues to the east. He said parents are complaining about driving around to get to the end of the pick-up line, and one resident on Parry Drive complained about people using his drive to turn around every day.

“Really, the biggest issue, when Joel and I met in the fall, was trying to get traffic off 200 South,” Robertson said, adding that he just wanted the Commission to have a conversation about how to alleviate that problem that’s continued for over nine weeks.

Beam said there’s a small turn lane on CR 200S – about 300 feet long – but it needs to be a lot longer. The ultimate goal would be to get and keep the traffic off 200S and keep it on Dwight Drive, which the city recently took in as a city street.

Commission member David Allbritten asked if a second lane could be cut in. Beam said Dwight wasn’t wide enough to do that.

Dillon said Dwight Drive is a road the city has taken over, but he’d like to look at it a little more. There’s not a lot of crown in that road, he said. He said whatever they do, there would be a significant expense to it.

City Planner Justin Taylor said in the future, the city was looking at the possibility of putting in an east/west road to the north of the school. However, that is probably far in the future.

City engineer James Emans agreed that some of the solutions the Commission talked about were “really expensive.” He wanted to know how long the problem had been going on and if it was COVID-19 related and if the issue would continue.

Robertson said the school is growing and some families were picked up from some of the new housing in the area. He agreed that it was likely that more students were not riding the buses because of the federal mask-wearing mandate on buses, but he said Eisenhower’s student population also was growing. Less than 40% of Eisenhower’s 500 students ride the bus.

Emans said he didn’t see anything happening within a year and it needed to be studied before major dollars were spent on a solution.

The matter was tabled for further study.