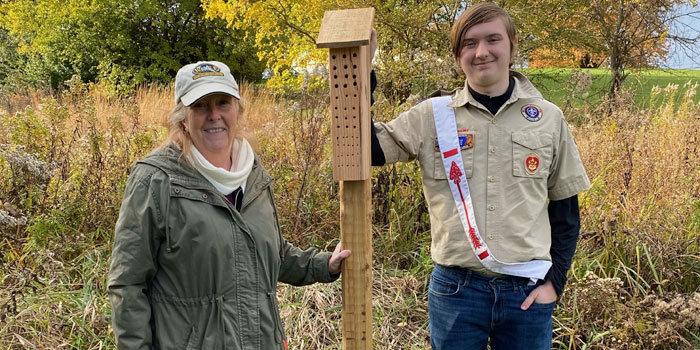 SYRACUSE—Jackson Hayes, of Boy Scout troop 728 in Syracuse, completed the installation of six bee hotels for his Eagle Scout project Oct. 23. Hayes, a lifetime resident of Syracuse, was aware of the mission of Wawasee Area Conservancy Foundation to protect the wetlands and shorelines in the community.

He had explored the boardwalk and noticed the native habitats that were being promoted and preserved. Take this observation, and couple it with his understanding of the steep decline in bee populations and the importance of pollinators and an idea is born. “There is a common misconception that all bees live in a hive,” he said.

“Many species are independent and seek protection in various nooks and crevices, often being chased out or poisoned if they choose an inhabited location. This is contributing to their population decline,“ said Hayes. He researched, planned and built bee hotels that serve as both protection and a place for bee reproduction.

The hotels will encourage the pollinators to stay in the area and contribute to the growth and pollination of native habitats. The WACF was a gracious partner, encouraging Jackson’s research and interest, and permitting him to install his bee hotels on three different protected properties in the community.