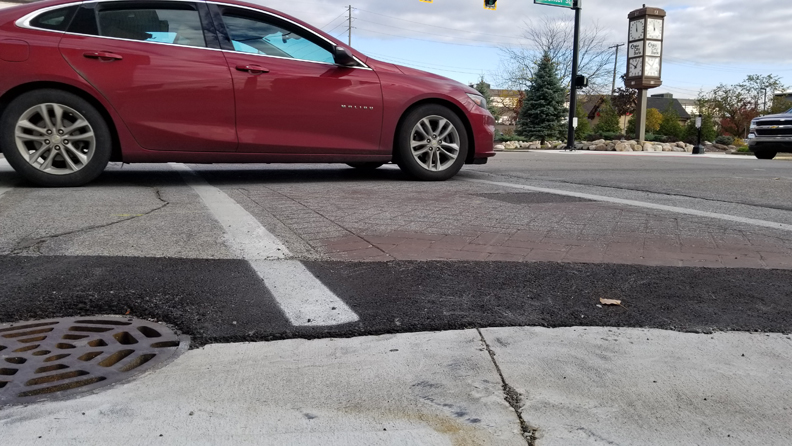 Numerous street-related projects have taken a toll on ornamental crosswalks in the downtown business district. Pictured above is the crosswalk at Indiana and Center streets. InkFreeNews photo by Dan Spalding.

On Monday, Nov. 1, the city council approved initial plans to spend more than $50,000 on a study that will provide guidelines on how to improve the existing streetscape.

Rather than an overhaul, Mayor Joe Thallemer calls the initiative an extension of what already exists.

In the world of urban planning, streetscapes are defined to include streets and sidewalks.

The city is already in the midst of replacing some trees in the downtown business district and replaced trash receptacles last year.

But time has taken a toll on many of the landscaping boxes, some of which are in disrepair.

Ornamental stamping of crosswalks has been diminished by numerous street repairs and the installation of new stoplights at several of the downtown intersections. Decorative pavers that are part of the sidewalks have become uneven in some instances.

Councilman Jerry Frush suggested the cost of the study seemed expensive. That led to a string of endorsements for the plan from Thallemer and several council members.

Thallemer said they considered doing the work in-house and possibly a phased-in approach to changes.

Councilman Michael Klondaris, another business owner, said there is a real need to improve the streetscape.

Council Member Cindy Dobbins, who lives and owns a business in the downtown, spoke on behalf of the plan.

“It’s been 20 years so we got quite a lot of mileage out of it,” Dobbins said. “It would behoove us to spend the money.” 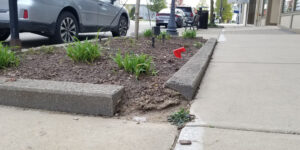 Taylor said he’d like to see the study completed by spring and that a public meeting would be held afterward to receive input.

In another matter, council approved the establishment of a planned unit development that is part of the residential development south of CR 350N near the airport. The Greenbriar development was originally going to be an entire PUD, but was modified and reduced in scope after complaints from nearby residents.

The new plan, which already gained support from the city plan commission, will include 42 villas on nine acres on the east end of the overall development.

In its approval, council will have the plan commission provide a secondary review as plans are further developed.

Council also approved the transfer of $30,000 to purchase Kayak Kiosks for Center and Pike Lakes. The kayaks will be available for rent. Parks Superintendent Larry Plummer said Warsaw could very well be the first city in Indiana to establish a kayak rental program.

A grant from Kosciusko County Convention, Recreation and Visitors Bureau will ultimately pay for the project.