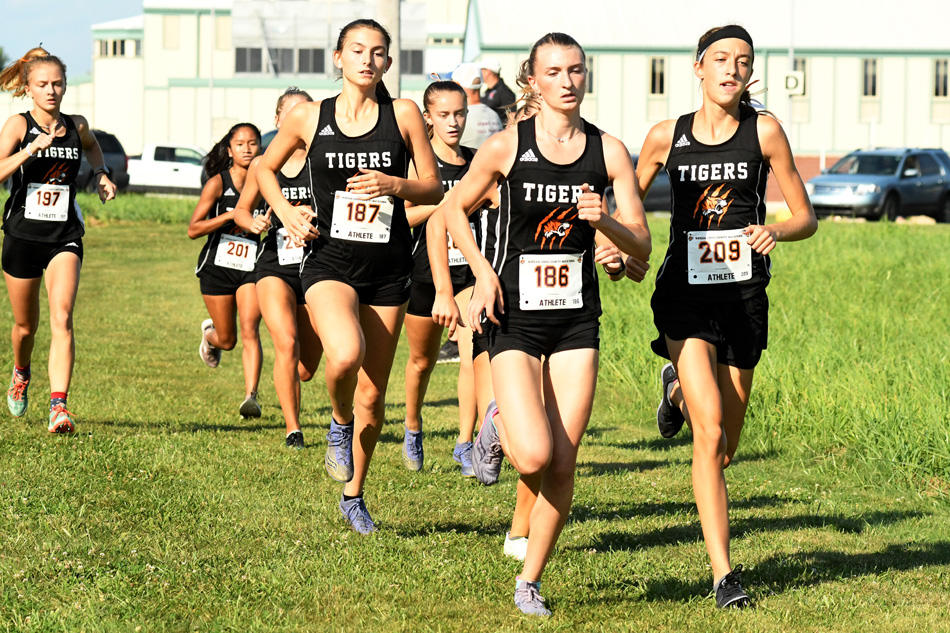 Warsaw is looking to hang together and score big points at the IHSAA Cross Country State Finals this weekend. InkFreeNews file photo by Mike Deak

WARSAW – There was no need for alarm, but that didn’t mean Warsaw could just coast to another goal on the season checklist.

The girls cross country team from Warsaw were a little more heralded in its pursuits to a state berth this season. After recovering to split the NLC championship with Northridge in the championship meet, the Tigers stacked more sectional and regional team titles into the archive, and then finished second to No. 6 Chesterton at the semi-state last weekend.

The Lady Tigers, which check in at No. 13 in the latest IATCCC poll, have the talent to take it to a top 10 spot in the finals, per head coach Jason Fleming. But as the returners from last year’s squad know all too well, just being there doesn’t cut it, as Warsaw finished last among the competing teams.

“I am always very cautious when going into a meet,” Fleming said. “I have seen over-confident teams slip and not achieve what they are supposed to on paper. I know the girls are going to give it their all every time, but I want to make sure they know we still have to be ready for a fight. I think the girls learned a bit about what our team can do if focused on a result. I just want them to be proud of what they have accomplished.”

Warsaw makes its tenth overall appearance at state, it’s best finish 11th overall when Ashley Erba won the individual title in 2011. The Tigers do have the guns to approach that stat, led by Joey Rastrelli at the top. The sophomore, in her first season of cross country after a stellar freshman distance season in track, was the NLC and sectional champion, regional runner-up and a top 10 at the semi-state. The sky is the limit at this point for Rastrelli, per Fleming.

“Joey gains experience every time she races,” offered Fleming. “She knows she will have to focus on the little things to run with the front end of races at this level. Joey is always willing to push herself each time. She is just so competitive. She is able to handle the stress of being out front really well, and this will serve her well this weekend.”

At this point a year ago, Wini Barnett was Warsaw’s frontrunner, and has done an admirable job nipping at Rastrelli’s heels as a solid two runner for the squad. From there, Warsaw has had a plate of spaghetti for the order of its next seven runners, but usually working its way to some combination of Mikayla Mimnaugh, Regan Brouwer, Ava Knight, Elizabeth Vander Bie, Marissa Howett or Amanda Lusinde.

Warsaw and everyone else at New Prairie got to see what state championship racing looked like when defending girls state champion Karina James of Lowell raced ahead of everyone and won the semi-state by a full 40 seconds. James looks to defend her title, as does the Carmel Greyhounds on the team side. Northridge is also in the team field.

Racing at the LaVern Gibson Championship Cross Country Course in Terre Haute begins with the boys race at noon and the girls race at 3 p.m.