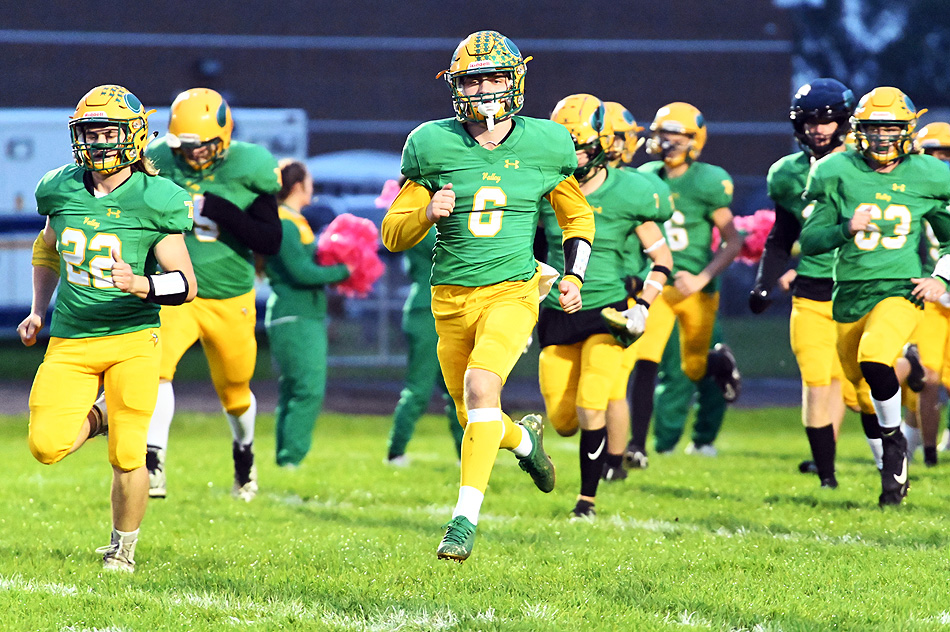 Jamasyn Virgil (6) and the Tippecanoe Valley Vikings are ready to host Marian this Friday at Death Valley. InkFreeNews file photo by Mike Deak

AKRON – The Tippecanoe Valley Vikings are coming off one of the biggest wins in recent program history and have to be feeling good as they prepare for the next round of sectionals. The Vikings cannot afford to dwell on their 22-8 win over the Garrett Railroaders, though, as Mishawaka Marian comes to town Friday night.

For those of you keeping score at home, the Knights were the last team to leave a bad taste in the mouth of Valley, thrashing the Vikings by a score of 41-24 in last year’s sectional at Death Valley. That score was largely the result of an extremely talented Mishawaka Marian team executing the game plan to perfection, scoring the first 41 points of the game. Valley head coach Steve Moriarty and his staff realized after that game that there was work that remained to be done.

“After last year’s game against Marian, we knew we had some work to do in the offseason to get to their level,” said Moriarty. “I think that we did that. I’m very proud of the players for putting in the time to get back and have the chance to play Marian.”

Put in the work they did as the Vikings have decimated opponents each and every week with a potent offense and a stout defense. The two units have complemented each other and picked one another up when the other struggles. Last week’s game against the Railroaders was a perfect example of this. When the offense struggled early, the Valley defense made life tough for the Garrett offense, forcing five turnovers and keeping the Railroaders off the board early.

“I think the defense did a great job of doing their assignments last week against Garrett,” said Moriarty. “I think that we will need to be prepared both for the run and the pass against Marian. They are 50/50 when it comes to the run and pass. That makes them very hard to defend.”

This year, however, it will be a different crew of Knights than what took apart Valley a year ago. Marian is led by sophomore Bryce LaSane in the passing game. The young quarterback has thrown for 1379 yards and 14 touchdowns this season. He does have six interceptions in 10 games though, a statistic that Wade Jones and the Valley defense will be looking to increase. Jones currently is tied for the state lead in interceptions with 10, four of those last week at Garrett.

On the ground, it is senior Kaleb Lusanga that gets the majority of the work for the Knights. Lusanga has galloped to an impressive 939 yards and 13 scores on 172 carries. Surprisingly, both of these players will be relatively new faces in this year’s game. LaSane attempted four passes last time around in a backup role while Lusanga was absent from the box score.

The weather Friday night could end up playing a major factor in how the game is played and, ultimately, which team emerges victorious. Currently, projections are calling for a 70 percent chance of rain with 10 to 15 mph winds and temperatures hovering in the 40s. That’s not exactly the kind of forecast that would compliment a passing attack. Spectators should be treated to a heavy dose of running from both schools.

Lusanga will carry that workload for the Knights while the Vikings house a stable of talented runners to pick and choose from. Valley has two senior backs who need no introduction to Vikings fans. Jamasyn Virgil and Hunter Eherenman, as well as athlete Braden Shepherd, give Coach Moriarty and his staff a lethal one-two punch coming out of the backfield plus the options of mixing in Shepherd. In addition to the veterans, Valley also has Nate Parker and Dalton Alber, both sophomores who are capable of filling in to keep the seniors fresh and played a huge role in Valley’s win against Southwood to lock up the Three Rivers Conference.

It’s worth also noting the importance of this home playoff game for Valley as well. This game provides the Vikings with a chance to do something they have not been able to do in over two decades, win a second sectional game in one year.

“It is always special to be able to play at home,” said Moriarty. “It is nice to play in front of a home crowd. I think that the players feed off of that.”

The Vikings and Knights will play this Friday night at Tippecanoe Valley High School at 7 p.m. The winner will then face the winner of the John Glenn and Jimtown game with a sectional title at stake on Nov. 5. Valley would host the championship regardless of the opponent.