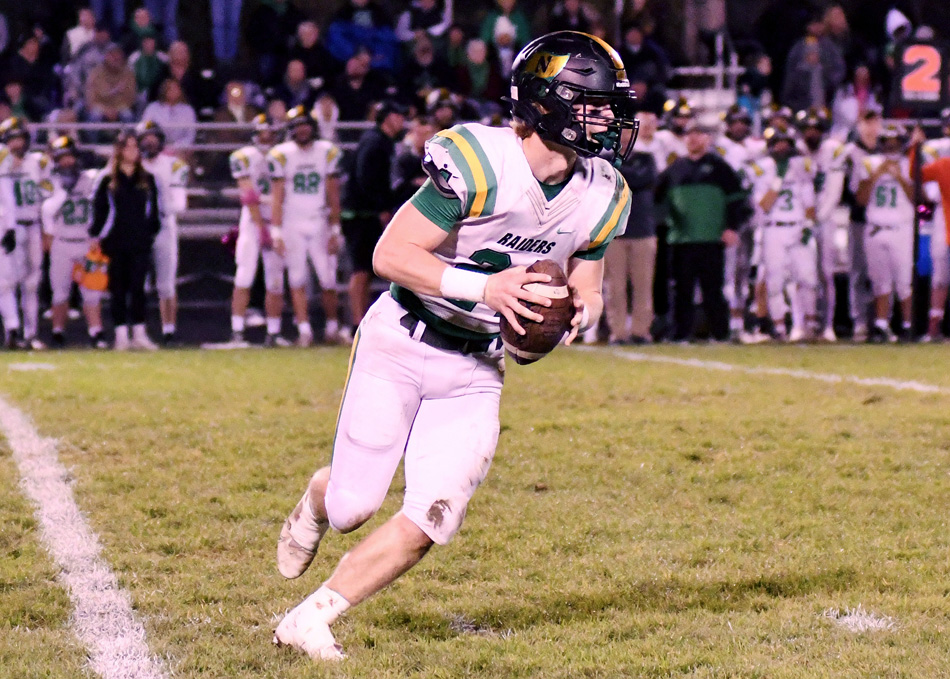 Northridge’s Tagg Gott accounted for all four of the Raiders scores Friday night in a 28-7 win over NorthWood. InkFreeNews photos by Nick Goralczyk

NAPPANEE – What a difference four weeks can make.

When the Northridge football team hosted NorthWood on Sept. 24 it was a 42-8 blowout win for the Panthers. Well, they call the sectional a new season and with good reason. Tagg Gott and the Raiders flipped the script on NorthWood, stunning the Panthers 28-7 in the opening round of Sectional 19 play at Andrews Field.

“There were two things we talked about this week,” began Northridge head coach Chad Eppley. “The first thing I got from coach (Tom) Wogomon. He told it to us my senior year and my junior year, ‘It’s hard to beat a good team twice.’ We still think of ourselves as a good team and obviously we proved it tonight.

“The second thing we said was this is not a ‘could be our last game’ or anything like that. This is a first of five series for us. We’re staying positive and just looking towards the future.”

The positivity started for Eppley’s squad in the first quarter as Gott led the team on an 85-yard scoring drive to break the scoreless tie. Gott, who started the season as a running back and is still wet behind the ears as a signal caller, capped the drive with a one-yard sneak into the end zone. While that drive highlighted the Raiders’ first quarter efforts, three false start penalties set the tone on the night for a NorthWood squad that repeatedly fell victim to its own mistakes. 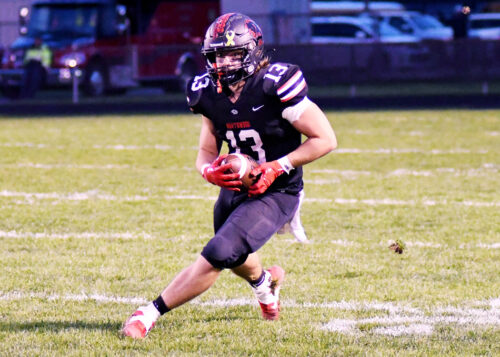 An ineffective offense from the Panthers gave Gott and company another opportunity that did not go wasted. Gott this time led a 65-yard drive early in the second quarter, ending it this time with a 10-yard touchdown pass to Kade Sainz. A successful two-point try following a NorthWood personal foul made it 15-0 in favor of the Raiders.

That sequence lit a fire under the Panthers as Owen Roeder would lead a nice scoring drive for the home team. Roeder connected with Parker Filley for a fourth down conversion then hit Ethan Evers for a 21-yard score to get Black Crunch on the board for the first time.

JJ Payne picked off a Gott pass attempt on the ensuing drive but NorthWood would squander the opportunity inside Raider territory and be forced to punt. The Raiders tried to expand the lead before half but a clutch tackle from Victor Carnegie on fourth-and-goal stopped Northridge to leave the score 15-7 at the break.

The Raiders offense stalled again on fourth down to start the second half but Gott proved to be a problem once again for NorthWood, this time on defense. The junior, now playing linebacker, recovered a fumble to end the first drive of the half for the Panthers.

A missed field goal gave the ball and some momentum back to NorthWood, which used a pass from Kaden Lone to Filley for a 63-yard gain down to the Northridge 17-yard line. That play was the one. The tide had turned. Here come the Panthers! At least, that was how it felt until the very next play when NorthWood put the ball on the turf for the second consecutive drive and watched Northridge steal another possession.

With new life and still holding a lead, Gott got things done. The junior executed an 83-yard drive, converting a fourth-and-two with his legs and a second-and-25 with his arm along the way to his second rushing score of the night. It was 21-7 with 10:35 to play and things were starting to look grim for the Panthers.

Tyrese Thomas took “grim” and turned it into “gross” on the first play of the next drive for NorthWood. The junior Raider defensive back picked off a Roeder pass to set up Gott for what would be a truly masterful drive.

This time Gott led the Raiders on another 85-yard scoring drive. The junior would convert a fourth-and-one on his own 25, a third-and-22 and a fourth-and-three. Any down, any distance, Gott got it done. The Panthers defense was gassed and could not get off the field. The Raiders dared NorthWood to stop the Tagg Train and the Panthers simply could not. Gott ran in his third score of the night with 31 seconds to play to seal a 28-7 victory.

“That kid played out of his shoes tonight,” Eppley said of his stud athlete, grinning from ear to ear. “He had a phenomenal game and we’re glad we put him (at quarterback).”

As for the Panthers, Friday night was just simply not fun. The Panthers were missing NiTareon Tuggle which limited much of their ability on offense. It was also the first time the Panthers have been bounced from sectional play in the first round under Andrews. But the Black Crunch is young and returns a plethora of playmakers to next year’s squad. This loss will no doubt serve as a motivational stepping stone for the 2022 campaign.

“It’s unfortunate,” Andrews stated. “It wasn’t our night. Hopefully we can learn and grow and gain some valuable lessons.”