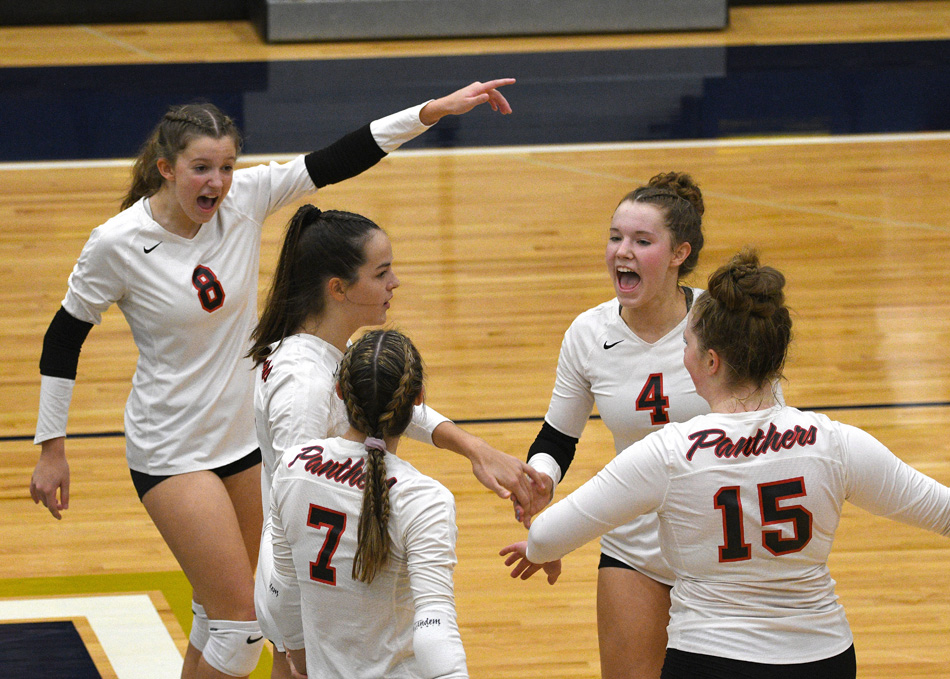 Hannah Chupp (8) and Annika Bennett (4) celebrate with their NorthWood teammates during a 3-1 win over Northwestern at the Norwell Volleyball Regional. InkFreeNews photo by Dalton Tinklenberg

Coming into Saturday’s matchup, neither NorthWood nor Northwestern were really accustomed to the feeling of losing, entering play with records of 31-2 and 25-1 respectively. The Lady Panthers dropped a season-opening matchup to Penn, a nationally ranked program in Class 4-A. Their other loss came at the hands of Lakeland Park Christian back in mid-September. The Lady Tigers on the other hand, had only lost four total sets all season. Two of those came in their one loss, a 2-0 stagger against current regional finalist Lafayette Central Catholic in October.

“It’s awesome, right? Once you get to regionals, all the teams are really good and you have to play well,” said NorthWood head coach Hilary Laidig.

The first set started with the NorthWood providing Northwestern with an experience they had not had, punching them in the mouth early to stun the Lady Tigers. The visitors from Kokomo carried themselves with slumped shoulders and hung heads as the purple chunk of the crowd sat silent.

After racing out to an early 8-2 lead, NorthWood looked to be in control for most of the remainder of the first set. Finally, late in that set, the Lady Tigers began to show just how talented they truly were, tying the score at 22 before ultimately falling, 25-22.

The second set was brutal for the Lady Panthers. After looking so good in set one, Northwestern completely dominated their opponents. Junior McKenna Layden was a one-woman wrecking crew for the Lady Tigers. She repeatedly delivered violent balls back across the net and single-handedly carried Northwestern through the second set. NorthWood was never able to pull closer than eight and just like that, the series was tied up with a 25-16 win for Northwestern.

Unfortunately for the Lady Tigers, Layden was unable to keep up her level of dominance indefinitely and NorthWood returned to form in the second set thanks to some big plays from senior Alana Lehman and freshman Claire Payne. Lehman did a fantastic job of adjusting the depths of her serves and keeping Northwestern guessing at the net. Payne showed Layden that she too could deliver some heat, blasting volleys back into Northwestern territory. The performance of the two girls helped the Lady Panthers claim that third set, 25-15.

“Obviously set two was a little struggle for us but I’m proud of the girls for coming back and really taking it,” said Laidig.

The fourth and final set may have been the best yet and was a fitting end to the match. Layden was back to her dominant ways early and the Lady Tigers took an early 6-3 lead. Lehman and Payne also went back to work, doing their best to negate Northwestern’s game-breaker. After knotting things up at eight apiece, the two teams found themselves in a back and forth fight that would culminate with a 17-17 deadlock. It was here where NorthWood took control, racing out to a 23-18 advantage. It looked as if everything was ready to be wrapped up, Northwestern had other plans. The Lady Tigers stormed back to seize the momentum and tie the score at 23-23, not ready to give up on their season. Laidig called a timeout to speak with her team.

“I just told them ‘Hey guys, the pressure is all on them. We’re up a set at this point. They have to win it and we have to take it.’ You can’t wait and see what they do,” said Laidig. “If you want to win you have to be aggressive.”

The timeout worked as the Lady Panthers came out to close a 25-23 victory.

Leading the way for the Panthers was Claire Payne, who had 18 kills and four blocks. Sophia Barber had 14 kills and five aces, Macy Lengacher had 30 digs and two aces, Hannah Chupp added 15 digs and Annika Bennett sent up 48 assists.

Now NorthWood will face off with a familiar opponent in Bellmont for a regional title. Bellmont has ended the season for NorthWood each of the previous two seasons. Bellmont took Angola’s best shot in the morning opener, but came away with a 3-1 score to advance to the final.

“The girls are wound up for it,” said Laidig in regards to the Bellmont matchup. “We try not to put all that pressure on it but it’s there so we’ll talk about it. They’re really quick and a well-balanced team, great defensive team so we have to play tough.”

That game will take place this evening at Norwell High School at 7 p.m.