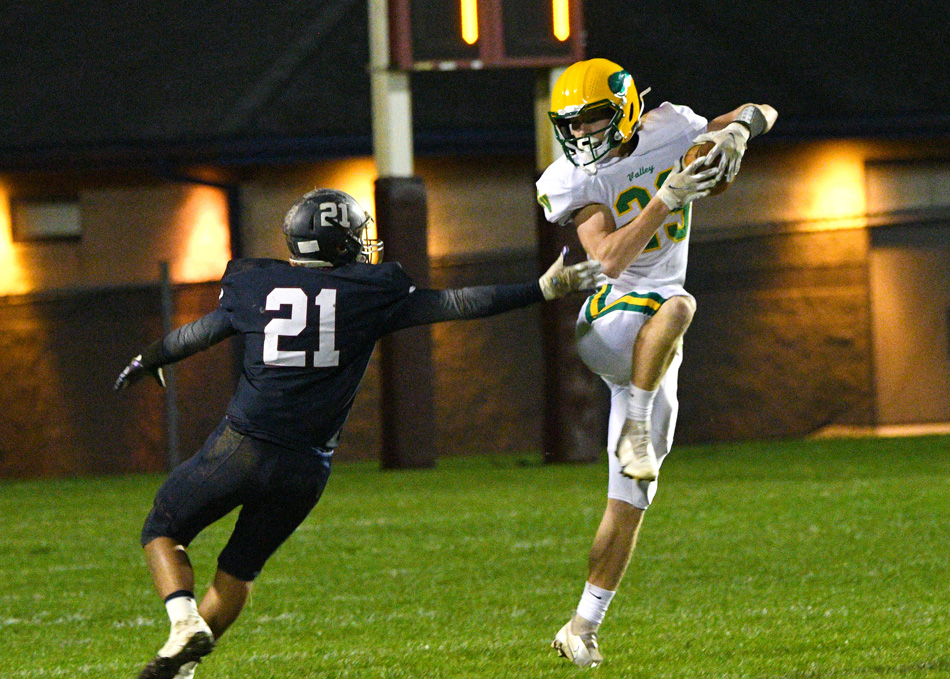 Wade Jones had a whopping four interceptions for Tippecanoe Valley in a 22-8 win at Garrett Friday night. InkFreeNews photos by Dalton Tinklenberg

GARRETT – The Tippecanoe Valley Vikings hit the road Friday evening for a chilly opening-round sectional matchup against the Garrett Railroaders. The Vikings were able to emerge with a 22-8 victory, but the game offered so much more than just the typical Valley victory.

The victory marked the first time Valley has started 10-0 since 1981 and hit double-digit wins since 1983. Perhaps more impressive, it served as a breakout game for one of the best young players in the state of Indiana, sophomore Wade Jones. The Valley youngster terrorized a Railroaders offense that was set on passing the ball all night. He managed to pick off four passes to set a new school single-game record and put him just one short of tying the school’s career mark.

“He is a special kid,” said Valley head coach Steve Moriarty. “We joke around with him all the time and call him Drago because he reminds me of Rocky [IV]. He’s a machine. He just flies to the ball and he does his job.”

For all of the positives, the game was not always so cheerful for the Vikings. After an impressive 69 yard gallop by Jamasyn Virgil for the first and only touchdown of the first half, Garrett began to flex their muscles. The Vikings found themselves on the Garrett one-yard line in a fourth and goal situation. It was a scenario the Valley offense seemed built for with its stable of strong runners and bruising offensive linemen. To the shock of the visiting crowd though, the Railroaders held on defense and turned the Vikings away.

The Railroaders took advantage of the momentum early in their drive and began to move the ball extremely effectively, even carrying Valley defenders down the field on several plays. Finally, Valley put a stop to the drive near midfield and took back possession with a desire to put their last drive behind them. Unbelievably, Valley again drove to the Garrett one-yard line before finding themselves in yet another fourth and goal situation. Garrett senior Trey Richards and junior Kyle Smith burst into the backfield to again stop the Vikings short. 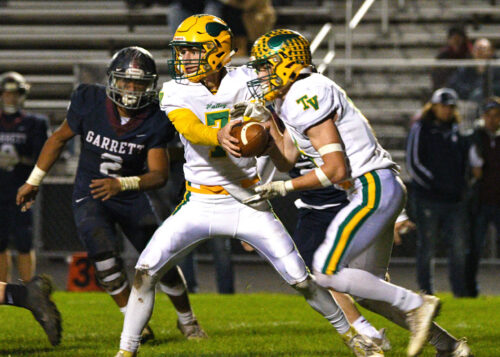 Heading into halftime, it was clear that Valley was on the ropes while the Railroaders were riding high. Coach Moriarty and the Vikings had a plan to change that.

“We came out and the big thing was to try to make sure, let’s see if we can get it in the ball,” said Moriarty. “So we spread them out quite a bit and tried to make sure that we can get open lanes and even widen our splits out and not be so tight at the goal line. Sometimes, we just tried, you’re trying to tell me I can’t get one yard, it’s crazy, out of the power-I that we have done all year.”

Early into the third quarter, it looked as though Garrett was heading towards scoring to tie things up. A quick bubble screen that went for 15 yards was only enhanced that much further by a facemask penalty on Valley. It set Garrett up with a first down and momentum on the Valley 20-yard line. It was here that the Garrett momentum turned back into a pumpkin as the Railroaders fell apart. Consecutive mistakes backed the Railroaders into a third and 27 before they ultimately turned the ball over on downs.

The Vikings added another score late in the third when Branson McBrier, the senior quarterback who has been so good all season, connected with Braden Shepherd for a 77-yard touchdown. On the play, Shepherd put the defense on rollerblades as he diced through the secondary into open space.

Just a few moments later, the Vikings scored early in the fourth when McBrier found Jones for one of the most well-executed connections of the year. The pass was good for 31 yards and put Valley ahead, 22-0.

The Railroaders did find the end zone midway through the final quarter to pull with two scores, but it was their follow-up decision that left some spectators curious. Instead of attempting an onside kick to keep the ball away from a Valley offense that had finally begun firing, Garrett kicked the ball deep before Shepherd ran it back to the Valley 30-yard line. The decision would prove costly as the Vikings were able to bleed out the final few minutes to preserve their win.

McBrier finished the night with 162 passing yards and two touchdowns while completing seven of 11 passes. Virgil tacked on 185 yards rushing and one touchdown. Rounding out the offensive attack, Shepherd hauled in four receptions for 108 yards and a score.

Next week, Valley will be at home as they face the toughest opponent they’ve seen all season in Mishawaka Marian. The Knights opened sectionals with a 49-14 dismantling of South Bend Washington. That same Marian team ended Valley’s season last year on the way to semi-state.