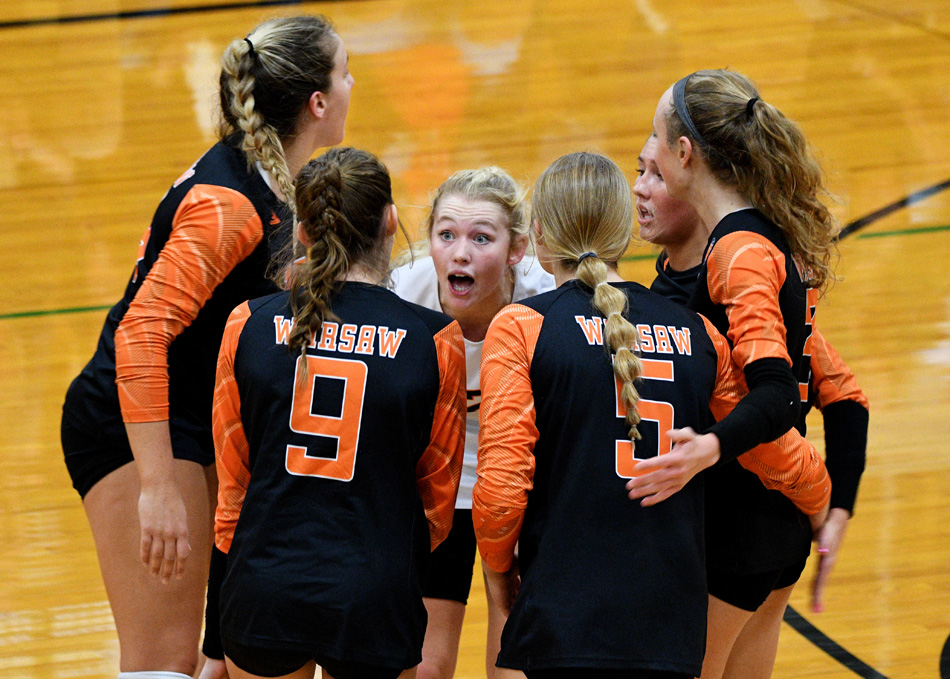 DUNLAP – The Warsaw Lady Tigers squared off with one of the best volleyball teams in the state Saturday night when they met the Penn Lady Kingsmen for a sectional title. Despite a good fight, Penn proved too much, winning by a score of 3-0 to take the Concord Volleyball Sectional crown.

Thursday night after a win in the opening round of sectionals, Warsaw head coach Chandra Hepler spoke about how her team had worked on mental toughness during the second half of the season.

“We talked a lot,” said Hepler at the time. “Mental toughness is what we really have been focused on for the last half of the season. Once we became an experienced team to realize when we make a mistake sometimes it’s hard for them to shake that mistake off.”

While the Lady Tigers battled hard throughout all three sets, it was ultimately mental mistakes that really put the proverbial nail in the coffin for Warsaw. Penn seemed to realize this and did what they could to get under the skin of the Lady Tigers. At one point shortly before the second set, Penn head coach Lisa Pawlik could be overheard telling her team, “speed, speed, speed! Get in their heads!”

The first set saw the two teams battle back and forth, trading points and feeling one another out. The general feeling was one of confidence-building for Warsaw that they could play with Penn. Then Penn senior and younger sister of Notre Dame linebacker Paul Moala, Janet Moala, made her presence felt. Moala began raining lethal spikes down that seemingly stunned the Lady Tigers.

The method seemed to work as Warsaw was never able to keep it close in the latter half of all three sets, dropping each by identical scores of 25-16. Each set played out relatively the same way after Moala began her assault. The two teams would trade points until a bad serve or misplaced volley took the momentum out of Warsaw’s sails.

“I think that we were on a rollercoaster tonight,” said Hepler. “Penn’s a great team. I thought Penn was very consistent but unfortunately, we were on a rollercoaster tonight. I think the mental toughness for us was not in our favor tonight. I think one error turned into three and four errors and we never got our momentum. I have to give Penn credit. Penn’s a great team but unfortunately, we caused a lot of errors ourselves.”

A loss is never easy to stomach but there is a silver lining for Hepler and the Lady Tigers. Coming into sectionals, Hepler stated that a staggering 10 of her 18 players had never played in sectionals. That won’t be a problem next year.

“Every year I talk about ‘let this feeling fuel you for next year’ so we’ll see,” said Hepler. “I think we’ve got some girls that are seasoned and they’re hungry. They know what it’s like to win and now they know what it’s like to lose. I think they will let that fuel them. We have some great freshmen coming in next year that always add to that. The girls that have played in the sectional now can help lead them so we’ll see what next year brings.”

“I’m going to miss them,” said Hepler somberly in regards to the senior class. “Those girls are very special. Last year when I took over they were juniors for us and I’ve seen them grow and develop. Even though tonight wasn’t our night, those seniors, I wanted the best for them. I wanted that win just for them tonight. It’s going to be a big loss next year without them.”