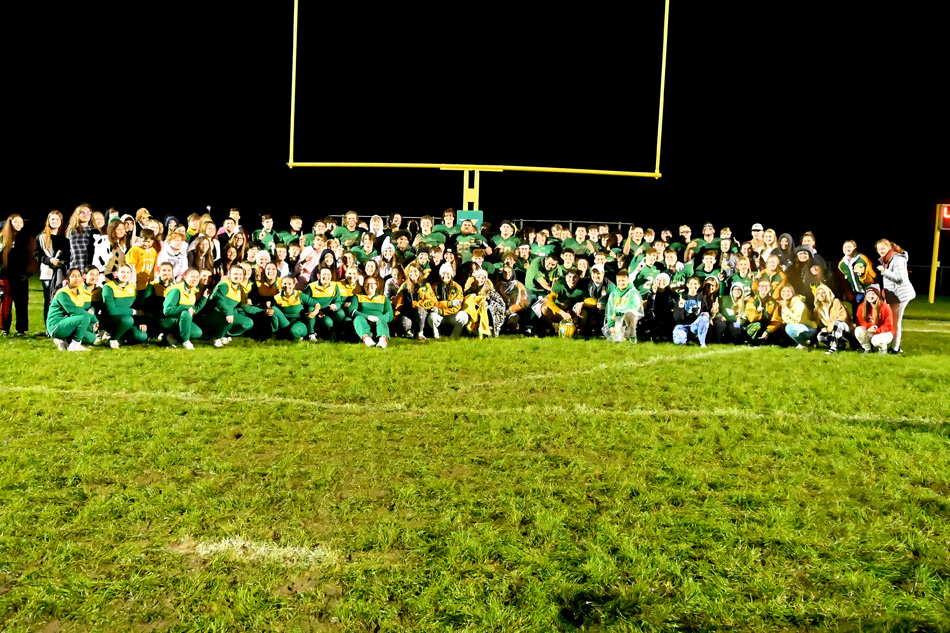 AKRON – Charlie Moriarty sat quietly in the Tippecanoe Valley pressbox, sheepishly grinning at his dad. While Steve Moriarty reflected on history made in his Vikings’ 56-25 win over Southwood, Charlie served as the fact checker.

As Rita Price and the elder Moriarty joked about how old he was when Valley last went undefeated in a regular season, Charlie corrected Steve that he wasn’t 12 in 1987 as the adults tossed out, but rather held up his two index fingers in the air to confidently state his dad was only 11 when the Vikings last felt like they did at Smith-Bibler Memorial Field Friday night.

As Steve Moriarty put it as three sets of team photos had to be taken and retaken in the end zone following the win, ‘Hey, we don’t do this a lot.’

All sorts of stats and facts were rewritten Friday night, beginning with Moriarty finally beating Southwood for the first time in four tries, and all four having Three Rivers Conference championship implications. While Southwood’s previous three wins gave the Knights TRC titles, Valley was the only one playing for title dreams at Death Valley, the Knights coming in at 3-4 overall in the conference while Valley had already locked up a share of the title with last week’s win at Wabash. But stakes on the home sideline were high, as Moriarty and his bunch weren’t about the revisit the bitter recent history in the rivalry.

Jamasyn Virgil put the team on his back from the get-go, scoring from 40 yards out on a power run to open the contest on Valley’s first drive. It was the start of a career night for the back, who would later add scoring runs of 67, 5 and 30 yards, then end the rout with an 86-yard kickoff return right up the gut of the battered Southwood coverage. Virgil also added four two-point conversions to punctuate a massive night with 217 rushing yards among his 320 all-purpose yards.

“This was just so much fun,” Virgil said. “I was not expecting a game like this. Certainly didn’t expect to return that last kick for a score. I just got good blocks and kinda put this one away. Just a great feeling to get the win and take the conference.”

Offensive lineman Wade Melanson and his self-proclaimed “dogs” on the line helped Valley produce 479 yards of offense, 440 of those rushing on an absolutely beat up pitch. What was a green and gold kit to start the night was three shades of mud afterwards, but Melanson was all about it.

“We knew we were the best team in the conference, but we’ve never beat this team,” Melanson said, referring to the past three years of his Viking career. “My freshman year, my brother Wes was in his senior year, I still feel like we won that game. But that taste never left us, we wanted to come out and demolish them. We did that, put 56 points up on a good team. That’s what conference champs do.”

Southwood did have a say in the matter in the third quarter, trailing 28-6 at the half, but making at least a game of it for a while. With just 19 players dressed and on the sidelines, the Knights took a bad snap on a Valley punt attempt and took over at the Viking 10. One play later it was a 10-yard touchdown pass from Morgan Lloyd to Cole Winer. Southwood would force and recover a fumble on Valley’s next possession, then again had Lloyd find Winer open, this time on a 51-yard scoring pass.

Just like that, it was 28-18 and all of a sudden there was a sense of restlessness on the Valley side of the field. After some stern and swift leadership statements from Virgil and Melanson on the sideline, Virgil busted off two straight touchdown runs to ease the tension.

Hunter Eherenman, Branson McBrier and Nate Parker all added touchdown runs for the Vikings, which at 9-0 are indeed undefeated through the regular season since 1987, and TRC outright champs for the first time since 2012, the first undefeated TRC season at 7-0 since 2006, when Valley also went 7-0 in the conference. Valley has also scored 50-plus points in a game for the fourth straight time, a program first.

“Every one of our coaching staff have come from different generations of head coaches throughout Valley football history,” Moriarty said. “So, we win, we talk about Valley pride and playing for the guys that used to, the guys that will. It means something to them. Their dedication and hard work I think is just a sheer fact of the love for Death Valley. Football here has been a special thing, and to be a part of it, just a small part of it, the coaching staff, the players, the hard work, the athletic director, it all comes down. It takes the whole team.”

It’s onto the sectional now for the Vikings, which will travel to Garrett for a meeting with the Railroaders, who lost 8-0 to Central Noble Friday night in Northeast Corner Conference play. Valley is looking to rewrite more history, having not won a sectional title since Moriarty and the Vikings won its last title in 1992. 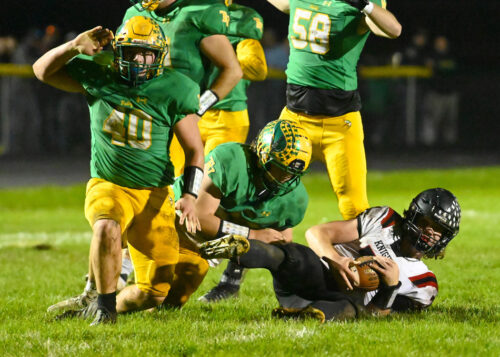 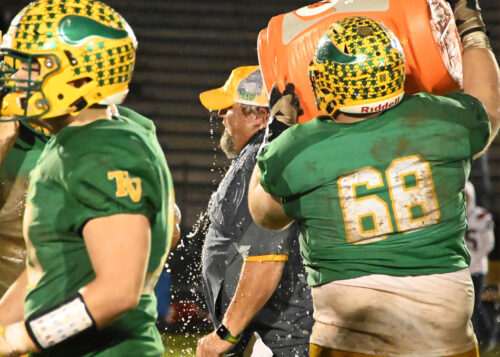 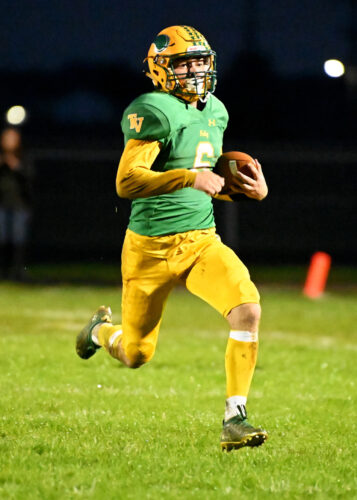 Jamasyn Virgil had 217 yards rushing and accounted for five touchdowns and four two-point conversions for the Vikings. 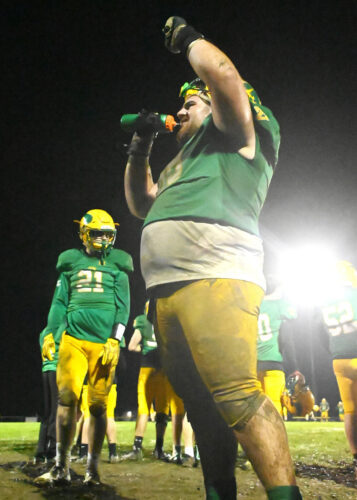 Wade Melanson motions to the Valley crowd in the fourth quarter.