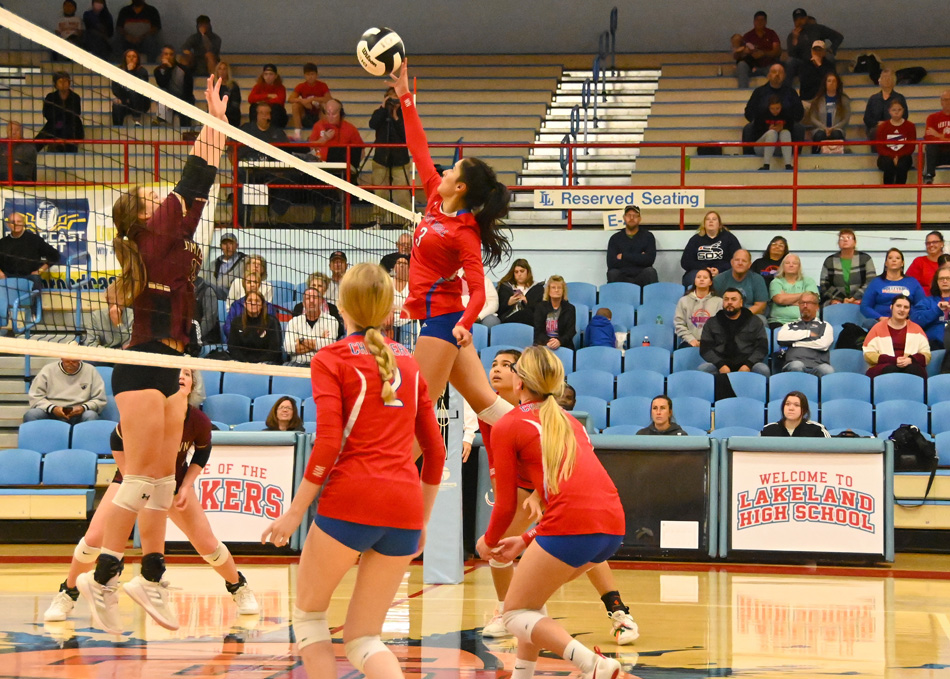 NorthWood and Warsaw have a few hours to regroup this afternoon ahead of their sectional volleyball championship matches. The Panthers knocked off Wawasee for the third time this season with a 3-0 win at the Lakeland Sectional while Warsaw also dispatched of a fellow Northern Lakes Conference foe in Northridge by the same 3-0 score at the Concord Sectional.

West Noble kept its Cinderella story going with a 3-1 win over Jimtown. After entering the tournament with just six wins on the season, West Noble has knocked off Tippecanoe Valley and Jimtown to advance to the final. 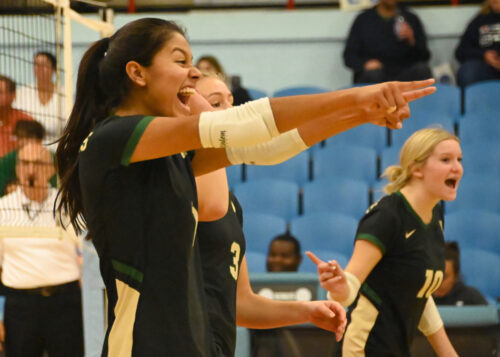 Wawasee’s Leslie Vazquez reacts after her team scored against NorthWood at the Lakeland Volleyball Sectional semi-finals.

Sammy Klages was huge for the Chargers, sending up 33 assists, but handled her opportunities almost flawlessly, unofficially making just one error on 73 ball handling attempts. Carolina Flores had 17 kills and 18 digs, and Tori Gomez and Dana Ritchie combined for 29 digs.

West Noble (8-22) advances to the final for the first time since the Maddie Schermerhorn-led Chargers won the trophy.

“Once you get to sectionals it’s a new season, nothing in the past matters at that point,” said West Noble head coach Kaitlin Logan. “We’ve got our full team back and we are clicking right now. Our girls are focused and determined, and that counts for something. They don’t want their season to end.”

NorthWood led by just one, 20-19 in the first set, but got a kill from Hannah Chupp and ace from Karis Bennett in pulling away for a 25-20 first set win.

It was a collapse in communication by Wawasee, however, in game two that put over the result. After Wawasee had worked back to trail just 19-18, five straight Warrior errors – including a ball that fell untouched between four players – painted the 25-19 second set and completely derailed any Wawasee hopes of an upset. NorthWood closed out the win with a 25-15 third set to advance back to the final. 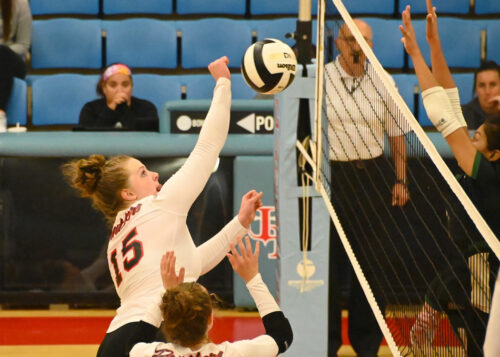 “NorthWood is what they are for a reason, they are the more consistent team,” said Wawasee head coach Jeff Phillips. “If you are the more consistent team and you are not worried you might make a mistake, you usually don’t. We got into a period where we were worried about the mistakes, and then they started happening. We felt we were real close to that team, then made mistakes and weren’t close anymore. We became the team that says, ‘I hope I don’t screw this up’ and then ended up going home.”

Leslie Vazquez, who could barely remove herself from the court after the final point dropped of her senior season, led the Warriors (21-11) with 12 kills and 10 digs. Amanda Allen, back for her first game after missing multiple matches with an ankle injury, had 12 assists and five digs, Dylan Konieczny had 10 kills, Kai Jamora had 19 assists and Elizabeth Miller added eight digs.

Added NorthWood head coach Hilary Laidig on her squad playing a suddenly hot West Noble team, “I told our girls afterwards that it’s nice to get this one out of the way, but we have to stay focused. We can’t let down at all. West Noble is playing well and winning games no one thought they would. You just have to be ready and stick to the key things that got us here.”

Sophia Barber again led the NorthWood (30-2) attack with 12 kills and Alana Lehman had nine kills and a couple timely aces in the third set. Macy Lengacher added 13 digs to pace the defense and Annika Bennett had 33 assists, six digs, two aces and a block.

Warsaw once again had its usual cast of characters doing what they do well, well. Avery Hales had 31 assists, five kills, four digs and a block, again causing problems for Ridge all over the court. Kylie Smith had 18 digs to lead the defense and added an ace and an assist. Abbie Porter had eight digs, three assists and three aces, Melaina Hawblitzel 13 kills and Kaylee Weeks nine kills as offensive disrupters.