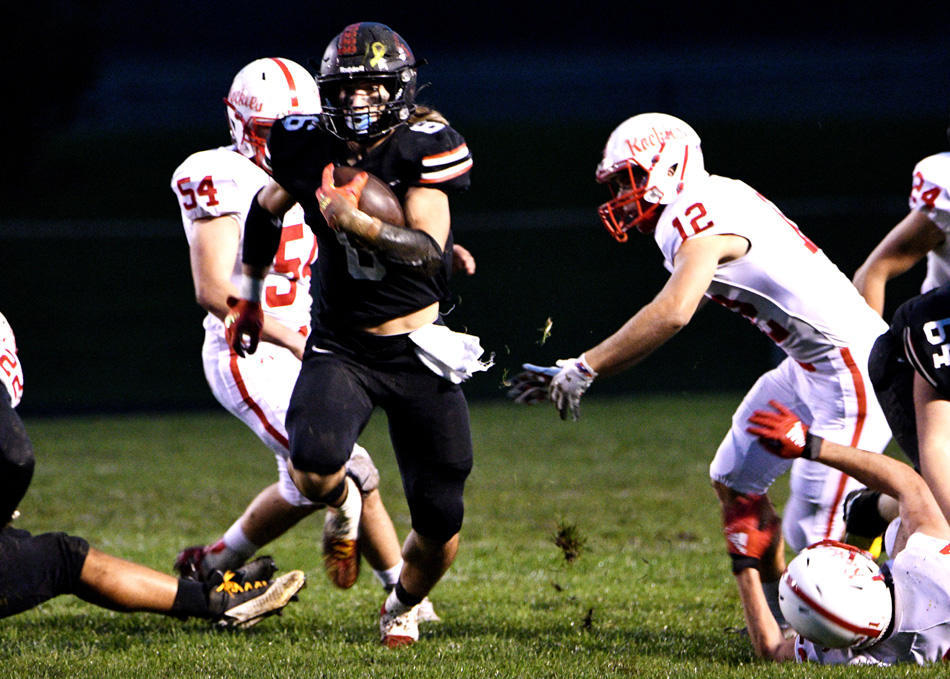 NAPPANEE – The NorthWood Panthers hosted the winless Plymouth Rockies at Andrews Field Friday for a regular-season finale that looked to be a tune-up game for the Panthers heading into sectionals. Unsurprisingly, that’s exactly what it turned out to be as NorthWood dominated the hapless Rockies, 42-14.

The Rockies scored first, returning the opening kickoff for a score by splitting the kickoff coverage in half and rocketing up the middle for a score. That lead would not last long as the Panthers would score 21 unanswered points to raise the blood pressure of the entirety of the visiting sideline.

The Panthers would score yet another touchdown to push the lead to 28-7. The home crowd was ecstatic with the student section roaring in excitement. On the ensuing kickoff, the ball went through senior Devonta Garcia’s legs before he was able to secure the loose football and burst past the Panthers kickoff team for the second special teams touchdown of the night. It was a play that truly exemplified the talented young man’s struggle to pull the rest of his team out of obscurity and win at least one game this year.

The Panthers would score once more in the second quarter with just under four minutes remaining to push their lead back to 21 points with a 35-14 advantage. Then with just over a minute left, the Plymouth defense was able to force a turnover and give their offense a chance to score. The Rockies began to move down the field in a race against the clock. Unfortunately for the visiting team, they found themselves with only two timeouts due to their coach’s tirade in the first quarter. Feeling the pressure of the clock, Garcia dropped back with under 20 seconds remaining and no timeouts. He fired a pass to the right side of the field that was promptly picked off by the tenacious Panthers defense. Again, the home crowd erupted while the visiting crowd could not believe the turn of events. As halftime began, the crowd began to empty faster than the line for the Kona Ice truck.

The second half was incredibly uneventful compared to the action of the first. Playing in front of a ghost town in comparison, the two teams ground out the remaining time on the clock. The Panthers took a majority of the third quarter and half of the fourth quarter on a drive that culminated in their final touchdown of the night. As Plymouth took the ball for one final attempt to score, the clouds opened up and rain began to pour on an already chilly night. The Rockies were unable to score yet again, this time against the NorthWood reserves. The Panthers took back possession of the ball and used the ground game to finish things out.

“Defense played well tonight,” said NorthWood assistant coach Doug Odiorne. “I think I mentioned it last week that we weren’t sure what kind of offense they were going to come out in. They’ve shown quite a few different ones over the course of the last several weeks. We had a plan for what we wanted to play as to what we wanted to play that was going to be good against whatever they came out in.”

The Panthers will now turn their attention towards the Northridge Raiders for the opening round of sectionals. Northridge will come in with an identical 5-4 record and on a two-game losing streak. The Raiders faced off against the Panthers once this season with NortWood easily claiming a  42-8 win.