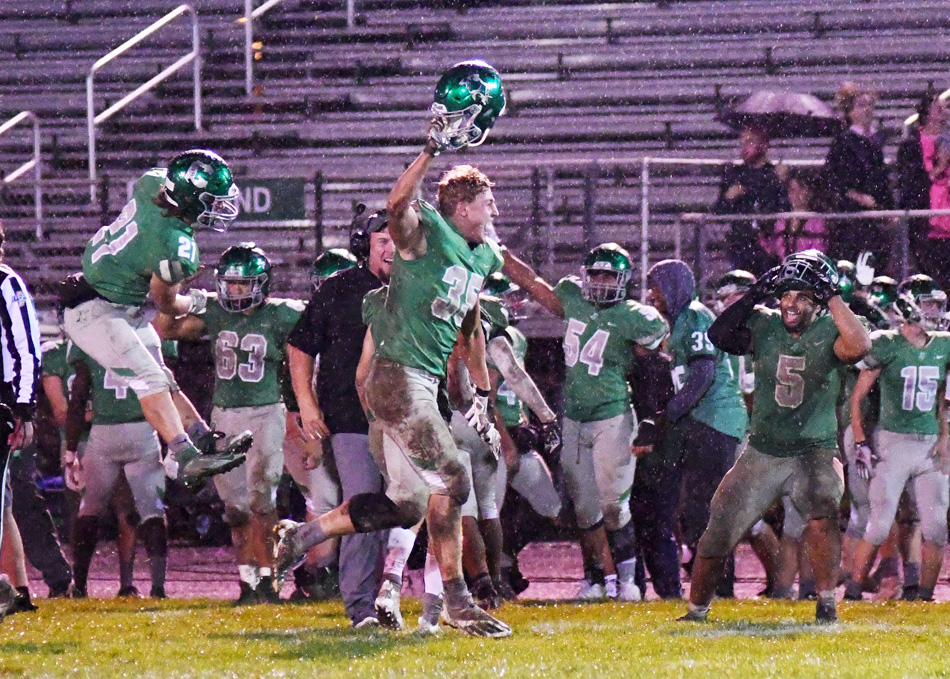 Concord’s Graham McGarvey (35) celebrates after he and the Minuteman defense forced a game-winning fumble in Friday’s win over Warsaw. InkFreeNews photos by Nick Goralczyk

Dunlap. Dutton. D’Arcy. All ‘D’ words that led to defeat for the Warsaw football team.

The Northern Lakes Conference title was on the line Friday evening as Concord hosted the Tigers in a winner-take-all contest. It was the Minutemen that left the muddy gridiron of The Jake with some shiny new hardware for the trophy case with a 26-22 victory.

Warsaw head coach Bart Curtis offered a lot in his postgame interview, but maybe no line was more telling than those three words. Concord took what the Tigers gave them and, in the process, took the game and the conference crown.

A fumble by the Tigers on the game’s opening drive led to a 25-yard touchdown pass from Hunter Dutton to Jack D’Arcy just two plays later. Despite giving up the early score, Warsaw was not rattled.

The Tigers would score 14 unanswered points behind a 24-yard run from Bryson Brown and a two-yard score from Julius Jones. Warsaw controlled time of possession and was setting the tone on both sides of the ball. As long as Warsaw wasn’t giving, Concord had a hard time taking much of anything. 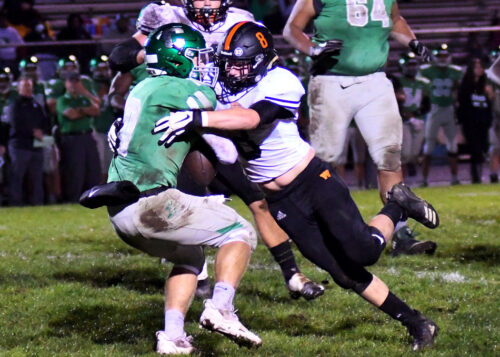 Facing a 14-7 deficit with just over a minute to play in the first half, Concord’s Gabe Mayo decided he was ready for his team to start taking again. Mayo broke through and blocked a Tiger punt setting up the Minutemen with a 1st and 10 at the Warsaw 16. The Tiger defense ended up forcing a fourth down and goal at the one but Dutton found Anthony Trudell for the equalizing score. The teams would head to the locker room tied 14-14.

The second half started with Jones getting an interception to set up a Tucker Curtis 27-yard touchdown run. A bobbled snap on the extra point attempt led to Curtis making a heads-up play by hitting Russ Winchester for a two-point conversion. The Tigers again found themselves with the lead, 22-14, with 9:45 to play in the third quarter.

Concord struggled to get much of anything going as Luke Anderson and Jette Woodward, respectively, ended back-to-back drives with sacks of Dutton. While Anderson’s sack happened on fourth down, Woodwards’s forced a fourth-and-23. Warsaw’s Theo Katris was called for roughing the punter on that fourth down punt, giving the ball back to Concord.

The Minutemen once again took what Warsaw gave them. Dutton, now with new life, capped that drive with a 12-yard scoring throw to Amarion Moore. The Concord two-point attempt failed, leaving Warsaw with a 22-20 lead with 10:39 to play in the game.

The two NLC juggernauts continued to exchange blows for the remainder of the game, but it was the Minutemen that would land the last two punches. Dutton led his team on the go-ahead scoring drive that had a familiar finishing touch with just 50 seconds to play as he connected with D’Arcy for 21-yard touchdown, the same connection that started the scoring on the night for Concord. In another cruel twist of irony for the Tigers the night would end just as it began as Warsaw lost a fumble on its final possession.

“Praise to (Concord),” admitted Curtis. “They didn’t fold when they had opportunities when it was going our way. They kept fighting and playing the next play. The punt block was huge, the punt block was huge. Obviously the fourth-and-23 was huge, when we’re ready to get the ball back. Us having a third-and-three inside their 30 and having two chances to get a first down was huge.

“Those were all things that we can control that we didn’t. (Concord) made the plays, they took care of business, they made the last drive.”

Warsaw finished the night with 280 yards rushing, led by Jones’ 122-yard effort. Dutton was 26-40 for 238 yards for Concord while D’Arcy had nine receptions for a game-high 87 yards.

Concord finishes the regular season with an 8-1 mark and a perfect 7-0 in the NLC. The Minutemen will host LaPorte in the opening round of the 5A Sectional 10 tournament next week. Warsaw (7-2, 6-1) is part of a unique, three-team sectional, will have three weeks off before playing either Homestead or Carroll in the title game of the 6A Sectional 3 tournament on November 5.

So, what kind of benefits or drawbacks can be expected with that much time off?

Coach Curtis will get back to you on that one.

Homestead plays at Carroll on October 29 with kickoff set for 7 p.m.